The regiment was created during the Shuvalov's reform, in January 1757, from old artillery units. It consisted of 2 battalions, each battalion had 4 companies of gunners and 1 of bombardiers. It fielded 456 3-pdr guns and light mortars.

The regiment supplied specialised personnel to each cavalry and infantry regiment to man their regimental pieces. For this purpose, it was subdivided in:

On August 30 1757, the Russian regimental artillery played an important role during the battle of Gross-Jägersdorf, repulsing several Prussian attacks.

On August 25 1758, at the battle of Zorndorf the Russian regimental artillery distinguished itself once more but lost many pieces. These losses forced Shuvalov to reorganise the Russian artillery.

Troopers were armed with a musket, a bayonet, a sabre and a linstock. They also carried priming flasks and slowmatch holders on their belts. 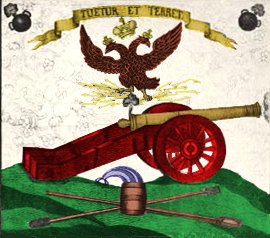