The regiment was raised on December 16, 1665 by Colonel Johann von Fargell in Frankfurt am Main, Regensburg and Nuremberg.

In 1698, the regiment was reduced to one battalions but in 1699, it received six additional companies.

In 1719, the regiment received a third battalion.

From 1722, the regiment was stationed at Halle an der Saale. It recruited in the Duchy of Magdeburg and in the Principality of Dessau.

During the Seven Years' War, the regiment exceptionally counted 3 battalions and was commanded by:

The numbering system (Stammliste) was first used by Leopold I., Fürst von Anhalt-Dessau (Der alte Dessauer) in the Dessauer Spezifikation from 1737. Around 1780 the numbers were used in the printed Stammlisten, still with some variations for the fusilier regiments. It became official by "Cabinets-Ordre" from October 1, 1806. The present infantry regiment was attributed number 3.

The regiment was disbanded after the capitulation of Magdeburg on November 8 1806. 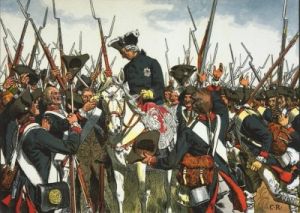 King Frederick with IR3 Anhalt-Bernburg after the battle of Liegnitz - Source: Carl Röchling, 1895

On August 26 1756, when the Prussian Army was ordered to proceed to the invasion of Saxony, the regiment was part of Ferdinand of Brunswick's column which had concentrated at Halle and advanced unopposed through Leipzig, Chemnitz, Freyberg and Dippoldiswalde, to the village of Cotta (reached on September 9) south of the Elbe near Pirna. On October 1, the regiment took part in the Battle of Lobositz. It was assigned to the brigade of Lieutenant-General Ferdinand of Brunswick. On October 23, when Keith's army left Lobositz to return to Pirna, the regiment was part of the right column. On October 28, Keith's army reached Gross-Sedlitz near Pirna and took its winter-quarters soon afterwards.

In July 1759, the missing battalion was re-raised, bringing back the strength of the regiment to 3 battalions. On July 23, the regiment took part in the Battle of Paltzig where it was attached to Manteuffel's Division deployed on the right in the first line of infantry. A few weeks later, on August 12 during the Battle of Kunersdorf, the regiment formed part of Flemming's Brigade guarding the bridge of Goritz. On December 3, 2 battalions of the regiment were attached to a small isolated Prussian force under Major-General Dierecke who had taken post at Meissen. This small corps was attacked by a much stronger Austrian force during the Combat of Meissen. On December 4, one battalion (counting 7 coys), being among the 3 battalions still on the right bank of the Elbe, was overwhelmed and captured.

In the July 1760, the regiment served in the Siege of Dresden where several of his pickets were surprised by the enemy, attracting Frederick's wrath: all officers had to remove their hat lace, drummers their cords and sleeve lace, NCOs and privates their hat lace, coat lace and side arms. On August 15, the regiment distinguished itself in the Battle of Liegnitz, recovering Frederick's esteem.

On July 21 1762, the regiment took part in the Battle of Burkersdorf.

Privates were armed with a musket, a bayonet and exceptionally a straight bladed "pallash" instead of the usual sabre.

As an exception, this regiment used light brown for the wooden parts of its arms: muskets, officers spontoons, NCO half-pikes, as well as flagpoles.

Officers had tricorne wearing a thin golden lace. They always wore tricornes notwithstanding if they were commanding fusiliers or grenadiers. They also wore a black and silver sash around the waist. They carried an officer stick and a silver and gold gorget. They wore white neck stock. Their coats were similar to those of the privates with the following differences: