As per a tradition, the regiment would have been originally raised in 1604 by M. de Némon, a gentleman from Lorraine. On January 17 1625, it was incorporated into the regular French army. On August 24 1671, it took the name of Anjou in honor of the duke d'Anjou. Finally, on September 10 1753, it took the name of the province of Aquitaine when it was given by Louis Xv to the young duke of Aquitaine.

The regiment counted two battalions and had prévôté (provostship). On December 10 1762, when the French army was reorganized, it incorporated the two battalions of the disbanded Berry Infanterie.

During the Seven Years' War, the regiment ranked 19th and was under the command of:

In 1756, the regiment was part of the army assembled at the camp of Calais.

In 1757, the regiment was sent to Germany to join the Lower Rhine Army. On April 3, the regiment was assigned to the Corps of six battalions blockading the Duchy of Gueldre, it occupied Neukirch. At the end of June, it was encamped at Bielefeld with d'Estrées' main corps. On July 26, it took part in the battle of Hastenbeck and then to the ensuing conquest of Hanover where the town of Minden and Hanover were captured. After the Convention of Kloster-Zeven on September 8, it followed the main body, led by the maréchal de Richelieu, who encamped at Halberstadt in Prussian territory from September 28 to November 5. In this camp, the regiment was placed in the center of the second line. After the defeat of the Franco-Imperial army at the battle of Rossbach, the whole French army retreated to the Rhine. During this retreat, the regiment took part to the expedition against Zell where, on December 25, along with La Marine Infanterie and Vaubécourt Infanterie, it forced the passage of the Aller at the bridge of Alten-Zell and occupied the town of Celle (Zell). At the end of the year, it took its winter quarters in the third line of the French Army in Lemgo.

In 1760, the regiment was involved in an action near Sachsenhausen.

In 1761, the regiment defended Kassel which it was garrisoning since a few months. On July 16, during the battle of Vellinghausen, along with Rouergue Infanterie, it relieved the Deux-Ponts Brigade who had seriously suffered from combat.

On June 24 1762, the regiment took part to the battle of Wilhelmstal. It returned to France at the end of the same year and took its quarters at Besançon. 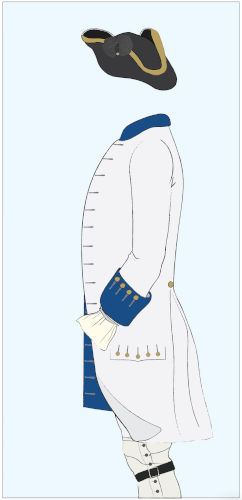