The regiment was raised on 24 April 1610 for the Comte de Beaumont Saint-Vallier when Henri IV made his great preparations to fight the Habsburg. It was disbanded after the assassination of Henry IV a few weeks later.

The regiment was re-established on 15 August 1615 and disbanded for a second time on 6 May 1616. It was definitively re-established again on 9 September of the same year. From then on, it belonged to the regular regiments later designated as “Petits-Vieux”, ranking 6th among them until 1670.

In 1621, during the Huguenot rebellions (1620–1628), the regiment took part in the sieges of Saint-Jean-d'Angély, Clérac and Montauban; in 1622, in the siege of Tonneins and Sainte-Foix. It then garrisoned Sainte-Foix during four years. In 1627, then counting 15 companies, it participated in the blockade of La Rochelle and in the relief of Saint-Martin de Ré. In 1628, the regiment incorporated Chastelier-Barlot Infanterie.

In 1632, the regiment served in Provence and fought in the battle of Castelnaudary and in the capture of Pézénas and Béziers. In 1633, it was transferred to the Army of Germany, capturing Trier, storming Freydembourg and besieging Nancy. In 1634, it took part in the siege of La Mothe and in the relief of Heidelberg and Philisbourg; in 1635, in the combat of Fresche, in the storming of Spires and in the siege of Vaudémont; in 1636, in the defence of Haguenau; in 1637, in the sieges of Landrecies, Maubeuge and La Capelle; in 1638, in the sieges of Saint-Omer and Renti.

In 1650, during the troubles of the Fronde (1648-1653), the regiment was recalled to form part of the Army of Guyenne. It distinguished itself in the combat of Blanquefort. It was then transferred to Picardie and Champagne where it participated in the siege of Rhétel. In 1651, then counting 800 men, it escorted Mazarin when he returned to France. In 1652, it had to quench an uprising in Anjou and took part in the defence of the bridge of Gergeau and in the battle of the Faubourg Saint-Antoine.

In 1653, during the last years of the Franco-Spanish War (1635–59), the regiment took part in the defence of Picardie and in the sieges of Rhétel and Sainte-Ménehould. In 1654, it garrisoned various places in Flanders and participated in the capture of Beverloo. From 1655 to 1657, the regiment assumed garrison duties in Le Quesnoy. In 1658, it joined the Army of Champagne.

In 1660, the regiment was sent to garrison Metz where it remained for seven years.

In 1667, at the outbreak of the War of Devolution (1667–68), the regiment served in the Duchy of Luxembourg. In 1668, it contributed to the conquest of Franche-Comté and took part in the siege of Dôle.

In 1669, the regiment formed part of the relief expedition sent to the help of the Venetians defending Candia (present-day Heraklion) in Crete against the Turks. The regiment suffered heavy losses in this unsuccessful expedition.

In 1670, the regiment was reduced to four companies of 70 men each. In also ceded its rank to Royal Infanterie.

In 1671 the regiment took the name of Chateauneuf.

In 1672, at the beginning of the Franco-Dutch War (1672–78), the regiment campaigned in Holland. In 1673, it took part in the siege of Maastricht. The same year, the regiment received the name of the Province of Artois when the regiment previously known by this name received the privilege of becoming a royal regiment under the name of La Couronne Infanterie. The new Artois Infanterie ended the campaign at Stenay and at the camp of Sédan where it remained for several months. In 1674, it took part in the Battle of Séneffe, in the Battle of Ensheim and in the combats of Mulhausen and Turckheim; in 1675, in the combat of Consaarbrûck and in the defence of Trier suffering very heavy losses. In 1676, the regiment was rebuilt. In 1677, it took part in the sieges of Valenciennes and Cambrai; in 1678, in the sieges of Ghent and Ypres. It was then transferred to Germany. In 1679, it fought in the combat of Minden.

In 1681, the regiment garrisoned Freiburg and took part in the occupation of Strasbourg.

Just before the War of the Spanish Succession, the regiment counted one battalion. On February 1 1701, the regiment was increased to two battalions and was used for the occupation of the Spanish Netherlands. The first battalion was initially posted in Upper-Guelderland and later in the Electorate of Cologne. In April 1702, the entire regiment was attached to the Army of the Rhine. In 1703, it took part in the siege and capture of Kehl, in the attack on the Lines of Stollhofen, and in the affairs of the Hornberg Valley and Munderkirchen. It also fought in the Battle of Höchstädt and participated in the capture of Kempten. In 1704, the regiment garrisoned Ulm but rejoined Tallard's Army in August. It then fought in the disastrous Battle of Blenheim where it was forced to capitulate. In 1705, the regiment was re-established. In 1706, it took part in the unsuccessful siege of Barcelona. In 1707, it took part in the capture of Bascara, the Castle of Calabous, Llivia and Puycerda; in 1708, in the siege of Tortosa; in 1709, in the storming of Châtillon, Bascara and Figuières, and in the combat of Girona; in 1710, in the relief of Agde and Sète, and in the siege of Girona. From 1711 to 1713, the regiment served in Roussillon where it saw little action.

In 1714, when it was resolved to capture Barcelona, the regiment took part in the blockade of the city. On September 11, a general assault was launched against Barcelona. The regiment with Auvergne Infanterie was charged with the attack in the centre. They stormed the Santa Clara Bastion.

This regiment counted two battalions and had prévôté (provostship).

During the War of the Austrian Succession, the regiment initially served in Munster on the Lower Rhine in 1741. In 1742, it was part of the French army who invaded Bohemia. In 1743, it was at Donauwörth in Bavaria. Then it served in Flanders from 1744 to 1748. The regiment fought at Pfaffenhofen, Germany, and Ventimille, Italy.

During the Seven Years' War, the regiment ranked 31st and was commanded by:

By August 1 1757, the 1st Battalion was assuming garrison duty in the citadel and fort of Calais.

In 1759, the 1st Battalion was moved to the coasts of Picardie, Boulonnais and Flanders.

On May 3 1755, the 2nd Battalion of the regiment (13 companies) formed part of the French reinforcement of Canada who sailed from La Rochelle with the new military governor: Baron von Dieskau. It disembarked at the fortress of Louisbourg. Lieutenant-colonel Jean Mascle de Saint-Julhien commanded this battalion. Between 1755 and 1758, the Chevalier de Saint-Julhien often had problems with his fellow officers. He hardly accepted the authority of his superiors from the colonial troops and defended the precedence of the French army units. He fell out with the commissaire ordonnateur, Jacques Prévost de La Croix, and with the governor, Boscheny de Drucour.

In 1758, during the siege of Louisbourg, the battalion consisted of 32 officers and 434 men. Among them, 27 were unfit for duty, immobilized in the fortress. On July 27, at the capitulation of the fortress of Louisbourg, French troops did not received the honours of war. Saint-Julhien and his battalion were sent to Great-Britain and exchanged at Calais in December 1758.

In the summer and autumn of 1759, a few companies of the reunited regiment were assigned to Thurot's squadron which was blockaded in the harbour of Dunkerque by a British squadron under the command of commodore William Boys. In October, Boys' squadron was driven from his station by a gale. On October 15 at 5:00 PM, Thurot seized the opportunity, slipped out through a thick fog and made to the northward. He then sailed for Ostend, Göteborg and later Bergen.

In January and February 1760, a detachment of the battalion took part in the famous expedition against the Irish Coasts. On February 28, on its way home, the squadron was attacked by the British. Several soldiers of the detachment were wounded. The detachment was finally taken prisoners and brought to Ramsey on the Isle of Man then to Belfast where it arrived on March 2. On May 10, it was freed and transported to France. The regiment spent the rest of the campaign of 1760 as well as the campaign of 1761 on garrison duty.

In 1762, the regiment was part of the French corps sent to the king of Spain to attack Portugal, allied to the British. It left France in March 1762. On August 25, it was at the capture of Almeida and those of a few little places on the Portuguese border. In then remained cantoned in Andalousia till the signature of the peace preliminaries. 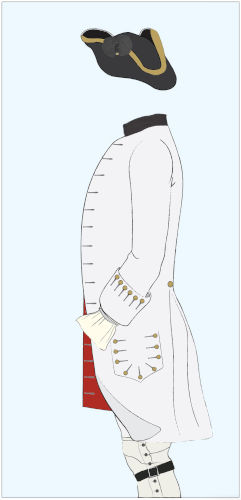 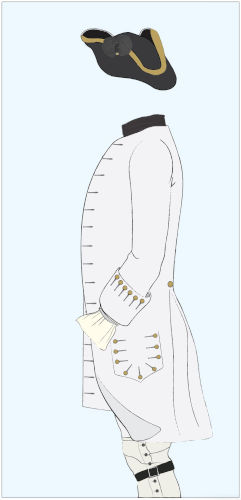 Both in the continental and Canadian services:

Menguy, Patrice, Les Sujets du Bien Aimé (a website who has unfortunately disappeared from the web)