In 1753, a light corps of 18 mounted carabiniers was raised.

In 1754 the mounted carabiniers received a platoon of approx. 50 foot jägers (also called "foot carabiniers") as accompanying infantry, to conduct the so-called "little war". For the most part, these foot jägers came from the count's forest staff, and were distinguished by their dexterity and good shooting skills.

Count Wilhelm was a passionate rider, and he took on the training of his carabiniers himself. Everything he demanded of his riders, he did himself, so that "from the beginning a spirit came into the corps that knew no impossibilities ... hung with the highest enthusiasm on the beloved count, who understood everything himself ...".

By 1756, the “Squadron of Horse Carabiniers” had grown to 87 men, divided into the 1st (Leib) company and the 2nd company. The light corps included the mounted Carabinier companies and a company of jägers (approx. 50 men).

The mounted carabiniers were commanded by:

The foot jägers were commanded by:

According to the subsidies contract with Hanover, Count Wilhelm had to provide an infantry regiment and a few artillerymen to serve the battalion guns. However, he was allowed to bring with him the 2 companies of his Schaumburg-Lippe-Bückeburg Grenadier-Garde and his Carabiniercorps (approx. 110 mounted carabiniers and 90 foot jägers), which would remain at his own disposal. During the war Wilhelm held 25 of his mounted carabiniers at his personal disposal as a Leibkarabinier company. The carabiniers were supplemented in terms of personnel mainly by selected soldiers from the other units.

Throughout the war, the unit was very active in scouting and skirmish duties and had the reputation neither to give nor to take quarters. It was engaged at Bielefeld, Ritterhude, Orlephausen, Gildehaus, Rheinberg, Krefeld, Lutterberg, Lippstadt, Sandershausen, Bergen and Minden.

On July 26, 1757, the mounted carabiniers were present at the Battle of Hastenbeck where they were detached to scout along the Weser along with the Hanoverian Hussars (1 sqn) and Bock Dragoons (1 sqn).

On August 5, 1758, at the Combat of Mehr, about 40 men of the mounted carabiniers were part of Imhoff's force who repulsed the French attempt directed against the Allied bridgehead at Rees.

In June 1759, the unit was part of the Allied Main Army under the command of the Duke Ferdinand of Brunswick. On July 1, during the French offensive in West Germany, the unit was probably at Lippstadt when a French detachment under the Comte de Melfort approached the town and summoned its commander. On July 18, the unit dispersed a French party near Lippstadt. 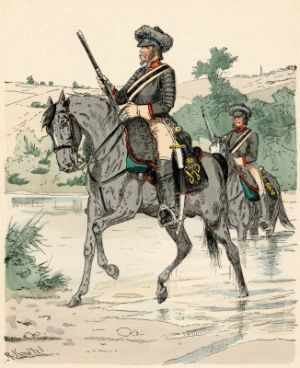 Troopers were armed with a straight steel hilted sword with black fist strap, two pistols and a rifled carbine. The carbine was slung from the shoulder belt on a swivel hook. Troopers wore a blackened steel full cuirass and upper arm scales (these arm scales were abolished in 1758 as being too restrictive and heavy). The black iron breastplate soon led to the nicknames 'Eisern' or 'Schwarzen Männer'.

NCOs wore the same uniform as troopers with the following distinctions:

The officers carried a silver breast plate rather than a blackened plate with gold decoration around the outside and breast. Also carried a gorget with the monogram W.

Düring mentions that the 50 foot carabiniers had the same uniform, but no armour, sabretache or sabre. They wore cloth breeches instead of buff leather breeches, and black shoes with grey gaiters instead of riding boots. However, all other sources describe the foot soldiers accompanying the mounted carabiniers as green-clad Jägers. We followed these other sources.

Troopers were armed with a rifle and a bayonet, and a pistol.

The Mounted Carabiniers initially had two standards: one "Leibstandarte" and one regimental standard. By 1755, only the first company carried a standard. After this date, there are no mentions of standards.

The color of the regimental standard was red with a black border. Thereupon a silver "W" (for Wilhelm), beyond a silver count crown. The crown had dark red cushions.

The standard was fixed to the flagpole with silver nails. The flagpole was black with a silver finial.

No colours are known for the Foot Jägers.

User Winterfeldt for contemporary illustrations of the jäger uniform

Boris Brink for the major revision of this article