Difference between revisions of "Bavarian Artillery"

As soon as 1356, the Free Imperial Cities of Augsburg and Nuremberg, located in present-day Bavaria, established a solid reputation in this field. The first powder manufacture was created in Nuremberg in 1435. Kaiser Charles V was the first prince to establish a standing artillery unit. In 1530, he had assembled more than 100 artillery pieces in the arsenal of Munich.

In 1601, the Elector of Bavaria, Maximilian I, established a standing artillery unit. He recruited 100 Büchsenmeister (gunner) among his subjects and training them accordingly. On May 12 1603, Colonel von Mörsburg was instructed to raise a regiment of 3,000 foot to serve the artillery. Maximilian also established a new powder mill in Munich, additional arsenals in other Bavarian cities and had several new gun barrels made.

In 1607, a detachment of the Bavarian Artillery (14 pieces, 82 wagons) formed part of the 6,600 men strong army of Alexander von Haslang sent against Donauwörth. In 1611, another detachment took part in the campaign against Salzburg.

During the Thirty Years' War (1618-1648), the Bavarian Artillery took part to 14 battles, 166 combats and engagements, 94 sieges and in the defence of 65 places. By 1620, it was under the command of Colonel Hans Melchior von Schwabbach. On February 17 1623, Levin von Mortaigne succeeded him at the head of the unit. In 1632, when Gustav II Adolph of Sweden occupied Munich, he captured 140 guns and mortars in the arsenal of the town.

After the death of Maximilian I in 1651, his son Ferdinand Maria (1651-1679) lived in peace with his neighbours, contributing only a small contingent to assist Austria against the Turks in 1664. However, this contigent distinguished itself in the engagements of Ladan, Stuhlweissenburg, Gran, Freistadt, Neuhäusel, Comorn, Presburg Serinwar, Kerment; in the victory of St. Gotthard an der Raab (August 1); in the sieges of Fünfkirchen and Canischa; and in the reliefs of Clausenburg and Lewenz.

The following Elector, Maximilian II Emanuel (1679-1726) reinforced his artillery. In 1683, three companies of Bavarian Artillery took part in the relief of Vienna. Engineers were by then attached to the artillery.

During the War against the Turks, on April 6 1684, the Elector informed Count von Monforth of the 3 divisons of artillery he could count on for the incoming campaigns. These divisions totalled:

These divisions were accompanied by 32 pieces and 68 6-horse wagons. For the campaign of 1685, a master-miner was added to the staff of the unit. During this war, the Bavarian Artillery took part in the reliefs of Vienna and Gran; to the sieges and captures of Ofen (August 9 1687) and Belgrade; and to the battle of Mohacz (August 11 1687).

After the war, the Bavarian Artillery was posted in the garrisons of Munich, Möhringen, Lechhausen, Ingolstadt, Landshut, Burghausen, Braunau and Reichenhall.

At the beginning of the War of the Spanish Succession (1701-1714), the entire Bavarian Field-Artillery (24 pieces) was involved in the conflict. In 1702, it formed part of the Bavarian Army who seized Ulm (September 8) and Memmingen. In 1703, it was at the victories of Schärding and Eisenbirn, took part in the campaign of Tyrol and in the victory of Donauwörth (September 20) and was at the capture of Augsburg (December 14). In 1704, the Bavarian Field-Artillery took part in the captures of Kempten and Passau and fought in the defeat of Schellenberge (July 2) and in the shattering defeat of Blenheim (August 13) where it was almost annihilated. In 1705, the remains of the Bavarian Field-Artillery served in the Netherlands where they took part, from May 30 to June 11) in the siege of Huy. Later, they were present at the defence of the lines along the Demer and the Dyle, from Marché-aux-Dames near Namur up to Geete. On July 29, they fought in a combat on the Dyle. From 1706 to 1708, the Bavarian Field-Artillery served on the Upper-Rhine. In 1709, despite its weakness (1 lieutenant-colonel, 4 captains, 3 lieutenants, 2 Stück-Junker, 50 men), it took part in the siege of Mons. In the following years, the unit was gradually reduced to less than 20 men. On July 1 1715, the unit was finally strengthened, forming a brigade of 150 men.

In 1717, a detachment formed part of the Bavarian contingent sent to the assistance of Austria against the Turks. On August 16, it distinguished itself in the battle of Belgrade.

In 1726, Karl Albert succeeded to his father as Elector of Bavaria. In the following years, the Bavarian Field-Artillery was reduced to only 50 men.

By 1753, the Bavarian Artillery consisted of:

In 1757, at the outbreak of the Seven Years' War, Bavaria contributed an entire contingent to assist Austria. This contingent comprised 10 infantry battalions and a detachment of artillery (1 lieutenant, 1 Stück-Junker, 6 NCOs, 23 Büchsenmeister) and took part in the siege and capture of Schweidnitz (November 12), in the battle of Breslau (November 22) and in the battle of Leuthen (December 5). Meanwhile, in September, the Bavarian Artillery was reinforced with 50 additional men and a Designeur joined its staff.

In 1758, the artillery serving with the Bavarian contingent took part in an action at Troppau, in the defence of Olmütz and distinguished itself at Pirna.

In 1759, 2 captains and 81 men took part in the bombardment of Leipzig and in a combat near Torgau; were present at the recapture of Dresden (September 4); and fought in the battle of Maxen (November 20). In December, the unit was reorganized in 4 divisions, each counting 48 men. More precisely, it consisted of:

In 1760, 1 captain, 2 lieutenants and 38 men served the 6 regimental guns and 2 howitzers of the Bavarian contingent. They were in Saxony fighting at Torgau on October 3, and assisting the Austrian army in the capture of Wittenberg (October 14).

In 1762, the artillery of the Bavarian contingent took part in the battle of Freiberg.

In 1763, the Bavarian contingent returned home. 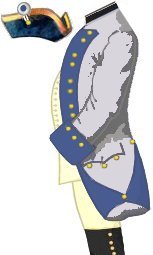 This article is mainly based on the following article which is now in the public domain: