The regiment was created on July 12, 1667, for the the Comte de Jonzac, at the beginning of the War of Devolution (1667–68). The same year, it took part in the sieges of Tournai, Douai and Lille. In 1668, it contributed to the submission of Franche-Comté. It was afterwards reduced to four companies.

In 1669, the four companies of the regiment formed part of the reinforcements sent to the Venetians at Candy (present-day Iraklion) in Crete where they distinguished themselves during the defence of the Sabionera Bastion at Chania against the Turks. These companies returned to France when the Venetians capitulated.

In 1671, on the eve of the Franco-Dutch War (1672–78), the regiment was increased to 16 companies. In 1672, it campaigned in Holland, taking part in all the sieges led by the king and entering into Grave which it garrisoned until 1674 when it fought in the Battle of Seneffe. In 1675, it took part in the capture of Huy; and in 1676, in the defence of Maastricht. After that glorious defence, the regiment did not take part in the last campaigns of the war.

In 1678, the regiment evacuated Maastricht and went to Mons and then to Verdun.

In 1684, the regiment campaigned in Catalonia and took part in the passage of the Ter at Puente-Mayor, in the siege of Girona and in the investment of Cap de Quiers.

In 1685, the unit ceased to be a gentleman regiment and took the name of the Province of Beauvoisis.

In 1714, the regiment took part in the siege of Barcelona.

In 1715, the regiment sailed from Barcelona to submit the Island of Majorca. When it returned from Majorca, the regiment was reduced to a single battalion.

In 1734, during the War of the Polish Succession (1733-35), the regiment joined the Army of the Rhine and served at the siege of Philisbourg which it garrisoned after its surrender. In 1735, it rejoined the army and took part in the attack on Hèche and in the Combat of Klausen.

In 1736, the regiment was stationed at Aire.

In 1755, the regiment took part in the training camp of Aimeries-sur-Sambre.

During the Seven Years' War, the regiment ranked 41st and was under the command of:

At the end of 1762, when the French Army was reorganised, the regiment was assigned to the service of harbours and colonies. In 1763, it was sent to Guadeloupe where it remained until 1768.

In 1756, the regiment took part in the training camp of La Hougue.

In 1757, the regiment was sent to Germany where it contributed to the submission of the Prussian towns of Westphalia. Somewhere between August 23 and September 6, it joined the Army of Saxony, led by the Prince de Soubise, in the area of Erfurt and Eisenach. On September 27, it was brigaded with Royal Barrois Infanterie and Royal Lorraine Infanterie under M. de Rivray in the first line of the left wing of the Franco-Imperial Army. On November 5, the regiment took part in the disastrous Battle of Rossbach where it was brigaded with Rohan Montbazon Infanterie in the Reserve under Broglie. In this battle, it lost Captains Eyssautier, Desmalets, Bourdois and Raoult, and Lieutenants Montet and Beaulieu. Killed; Captains Bellot, Masnadaut, Pressac, Montsauroy, Rauzan, Chambault, La Molère, du Lignon and 9 lieutenants, wounded. At the end of the year, it took up its winter-quarters in Hanau in Hessen.

At the end of January 1758, the regiment was assigned to the army that Louis XV planned to send to Bohemia for joint operations with the Austrian Army. However, when the Allies launched their surprise offensive, the regiment retreated towards Düsseldorf and Deutz with the bulk of Broglie's army. It passed the Rhine on April 3 and 4. By July, it had joined Soubise's army assembling near Friedberg in Hesse. In the first days of June, as a French army prepared for an offensive in Hesse, the regiment was part of a detachment under the command of Broglie who followed up Ysenburg during his retreat. On July 23, the regiment took part in the Combat of Sandershausen where it was placed in the first line of the left wing. It took the brunt of the Hessian assault and suffered very heavy casualties. In this combat, it lost Major du Rousset, killed; and Captain de Roscoat and Sub-Lieutenant Chevalier, wounded. On October 10, it was present at the battle of Lutterberg where it was placed at the extreme left of the first line. It was not involved into any serious fighting during this battle.

On Tuesday January 2, 1759, at about 5:00 a.m., Nassau Prince Louis Infanterie presented itself before the Sachsenhausen Gate of Frankfurt and was admitted as previously agreed. As soon as it had entered the town, the regiment ordered the town-guard to deposit arms and to admit 5 other regiments (Beauvoisis (2 bns), Rohan Montbazon (2 bns), Rohan Rochefort (2 bns), Bentheim (2 bns) and Royal Deux-Ponts (4 bns)). These regiments then seized the artillery on the walls and all the other gates, easily capturing the city of Frankfurt. This very important city remained under French control for the last four years of the war. On April 13, the regiment took part in the Battle of Bergen where it formed part of the third line of the right wing under the command of Prince Camille de Lorraine. The regiment was deployed in column behind the village of Bergen. Broglie ordered it to counter-attack the Allies who were making progress against Bergen. The regiment charged at the point of the bayonet and drove back the Allied attack. After this battle, it returned to France and was sent on the coasts of Bretagne where it was stationed until the end of the war. 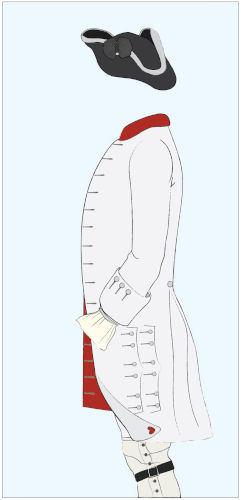