The regiment was raised in 1682 by Franz de Gondola according to a decree issued on March 7 of the same year. It was formed around 2 coys contributed by Taafe Cuirassiers.

In 1698, the regiment assumed garrison duty in Bohemia.

From 1714 to 1716, the regiment garrisoned the Comitat of Trencsén (present-day Trenčín/SK).

The regiment was disbanded in 1802

In June 1756, at the outbreak of the war, the regiment was stationed in Slovakia and counted 791 men and 780 horses. By September, it was in Northern Bohemia with [[Piccolomini, Ottavio II Enea Giuseppe Fürst|Piccolominiçç's covering force in the Königshof-Kolin region.

By August 2 1758, the regiment was part of the Reserve of the main Austrian army under the command of Daun near Jaromirs. Daun was following up the Prussian army retiring through Bohemia after the failure of the invasion of Moravia.

By mid-August 1759, during the Austro-Imperial campaign in Saxony, the regiment was attached to Hadik's Corps. On September 21, it probably took part in the Combat of Korbitz where it was deployed on the left wing of Hadik's Corps under Major-General Schallenberg. On November 20, the regiment took part in the Battle of Maxen where it was attached to Brentano's Corps initially posted at Röhrsdorf, 5 km north of Maxen.

In early June 1760, the regiment formed part of the Austrian Grand Army encamped near Dresden and was attached to the Reserve under General Count Wied. 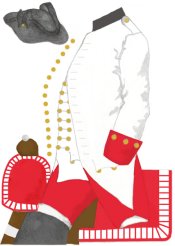 Raspe shows 13 buttons on the coat instead of 15. It also illustrates only one row of button on the waistcoat.

The aprons of the trumpets were yellow and bore arms to the House of Daun. The apron of the kettledrums were yellow with silver emboideries.