In 1757, as part of the Army of the Lower Rhine, the regiment was among d'Estrées' light troops for the planned invasion of Hanover. On July 26, the regiment took part in the Battle of Hastenbeck. On August 20, during the invasion of Hanover, it was sent ahead to Drakenburg with the Volontaires Royaux. At the end of the year, it took up its winter-quarters in the first line of the French army in and around Gerblingerode.

In April 1758, when the Comte de Clermont redeployed his army along the Rhine, the regiment was placed in the second line at Lechenich and Gymnich near Cologne. On May 5, Polleresky Hussards were disbanded because of the plundering and robberies perpetrated against the German Allies of France; 2 of its sqns were incorporated into Bercheny Hussards bringing the total force of this regiment to 6 sqns. After the successful crossing of the Rhine by an Allied army led by Ferdinand of Brunswick on May 31, the regiment retired towards Rheinberg where it joined Clermont's Army on June 2. It remained in this camp until June 12. On June 23, the regiment took part in the Battle of Krefeld where it formed part of the reserve, under M. de Turpin. In mid-August, after Ferdinand's retreat to the east bank of the Rhine, the regiment, as part of the Army of the Lower Rhine now under the Marquis de Contades, recrossed the Rhine for an offensive in Westphalia. On August 20, it was encamped near Wesel where it formed part of the Reserve. At the beginning of October, the regiment was attached to Chevert's Corps, which was sent to reinforce the army of the Prince de Soubise in Hesse. On October 10, the regiment did not take part in the Battle of Lutterberg because it was part of Castries' detachment left on the opposite bank of the Fulda River.

In April 1759, a few days after the Battle of Bergen, the regiment surprised the Prussian Finckenstein Dragoons during the night near Marburg, capturing many prisoners. By May 10, the regiment was part of the corps under the command of Chevreuse encamped at Burich in Ostfriese. In June, it took part in the French offensive in Western Germany. On June 4, the regiment was sent towards Gemünden on the Wohra. On June 8, it was at Frankenau to protect the line of communication between the reserve and the main army. On June 10, it marched from Frankenau to Waldeck. On June 14, it took post at Atteln. On June 18, the regiment along with some light troops occupied the village of Helmern. On June 30, these French light troops harassed the Allies rearguard during their retreat from Rietberg to Marienfeld. A skirmish took place between Turpin Hussards and Bercheny Hussars and the Prussian Ruesch Hussars (3 sqns) and Malachowski Hussars (2 sqns) under Colonel Narzinsky. On July 5, Turpin Hussards and Bercheny Hussards reached Steinhagen. On July 15, these two regiments occupied the village of Lübbecke near Minden. On July 28, Bercheny Hussards were attacked and driven out of Lübbecke by an Allied corps of 6,000 men under the Hereditary Prince of Brunswick. During their retreat, Bercheny Hussards were joined at the defile by Turpin Hussards, the Volontaire de Prague and the Volontaires de Muret. These French forces pushed back the Allied detachment pursuing the Volontaires du Hainaut. The regiment then joined Brissac's Corps at Gohfled. On August 1, the Allied corps of the Hereditary Prince attacked and defeated Brissac's Corps in the engagement of Gohfeld. On August 15, during the French retreat, the regiment, which was now too weak to serve adequately, was sent to the rear at Marburg where it arrived on August 19. By August 31, the regiment was with the French main army, attached to the reserve under the command of Saint-Pern.

By May 23, 1760, the regiment was assigned to Broglie's headquarters. On May 24, 50 men of the regiment were part of a French detachment under Waldner occupying Butzbach. Luckner was preparing an attack on Butzbach when a party of 13 French hussars appeared near Lich. Most of them were captured but 2 managed to escape and to give alarm at Butzbach. Waldner sent another party of 17 hussars to confirm the presence of the Allied force. They were pursued by Allied hussars who entered into Butzbach on their trail. Waldner retired through another gate with the garrison and entered into the woods in the direction of Friedberg. The Allied hussars engaged a picquet of Caraman Dragons and captured 1 officer and 20 troopers. They then engaged a picquet of infantry and captured 25 men. Luckner then divided his force into 2 parties: the mounted jägers entered into the woods while the Brunswick Hussars pursued the retreating French units up to Friedberg, bringing back prisoners and 30 carriages. In this action Luckner lost 2 hussars killed and 5 wounded. He also destroyed a French magazine. In the night of May 24 to 25, the regiment harassed Luckner's Corps while it retired. On June 20, Prince Xavier sent Bercheny Hussards and the Volontaires du Hainaut forward from Schlüchtern to reconnoitre the movements of the Hereditary Prince. In the morning, Bercheny Hussards were attacked by Luckner's White Hussars. The dragoons of the Volontaires du Hainaut were sent to the rescue and together with Bercheny Hussards, they drove back Luckner's White Hussars, taking 50 prisoners. In the night of July 7 to 8, Glaubitz left with the Anhalt Brigade and Bercheny Hussards for Amöneburg to cover Marburg and the French convoys coming from Giessen. On July 14, Glaubitz's detachment (Anhalt Infanterie (3 bns), Royal Bavière Infanterie (3 bns), Bercheny Hussards and some light troops) marched from Marburg towards Ziegenhain, encamping at Vasbeck for the night. On July 16, the Hereditary Prince surprised Glaubitz's Brigade in the engagement of Emsdorf where the regiment was encamped on the right wing to the south of Erksdorf. It tried to stop the advancing Allied cavalry but was routed. Only 262 men out of 900 of the regiment managed to escape the trap. On the night of August 21 to 22, the regiment took post at Elsen. On August 28, it was sent to Giessen to assume foot service. M. de Stainville left Dingelstädt with the Volontaires de Schomberg, Bercheny Hussards and Royal-Nassau Hussards and marched towards Halberstadt. From October 15 to 24, Stainville scoured the Hanoverian countryside before returning to Heiligenstadt (present-day Heilbad Heiligenstadt). On November 17, Prince Xavier's Corps retired towards its winter-quarters. Some 180 men of the regiment were left behind under Lieutenant-General de Vaux as part of the garrison of Göttingen.

On November 10, 1761, in the evening, a few parties of Allied hussars got close to the cantonments of Bercheny Hussards but retired when discovered.

By March 1762, the regiment formed part of Soubise’s Army of the Upper Rhine. On June 24, 3 sqns of the regiment were present at the Battle of Wilhelmsthal, the 3 other sqns had been detached towards Halberstadt. By July 12, the regiment was encamped at Helsa under M. de Guerchy. On the morning of September 24, it was part of Poyanne's Corps, which marched to pass the Ohm at Burggemünden and then advance on the Schwalm River. On November 20, Louis XV issued his instructions regarding the French armies serving in Germany, specifying which units should return to France right away and which should stay in Germany till the final evacuation. The regiment was part of those which remained on the Upper Rhine. On November 21, a convention of neutrality was signed in Frankfurt, and Soubise sent orders to the Volontaires du Hainaut and to Bercheny Hussards, which were marching towards Würzburg, to interrupt their march. 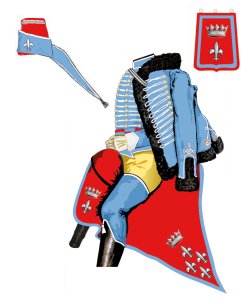 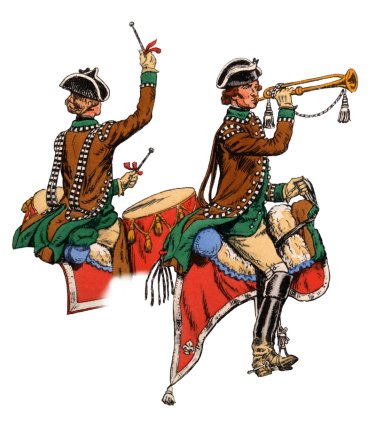