Up to the reign of Louis XIV, to the exception of the Gardes Suisses, no Swiss regiment had been maintained on a permanent basis in the French Army. They usually served for four years before being sent back home and replaced by new units. In 1671, Louis XIV charged Pierre Stuppa, a captain in his Gardes Suisses, to negotiate with the Swiss Cantons the creation and cession of four regiments. Contracts were signed on August 14 of the same year. The four regiment arrived in France at the beginning of 1672 and were admitted in the French service on February 17. The present regiment had been raised in the cantons of Solothurn, Aargau, Fribourg and Grisons/Graubünden.

In 1684, the regiment covered the siege of Luxembourg.

In 1698, the regiment took part in the training camp of Compiègne and was later reduced to three battalions.

In 1701, at the beginning of the War of the Spanish Succession (1701-13), the regiment counted three battalions and was sent to the Spanish Netherlands. In 1702, it took part in the siege of Trarbach; in 1705, in the siege of Huy; in 1706, in the relief of Fort-Louis and in the defence of Ath (2nd battalion only). In 1707, the regiment was detached to relieve Toulon and, at Montélimart, was informed that the Allies had raised the siege of Toulon and redirected to the Lines of the Lauter. In 1708, it fought in the Battle of Oudenarde; and in 1709, in the Battle of Malplaquet. In 1710, it took part in the unsuccessful defence of Douai; in 1711, in the storming of the Fort of Arleux; in 1712, in the Battle of Denain and in the sieges of Marchiennes, Douai and Le Quesnoy; and in 1713, in the siege of Landau. After the piece, it was placed in garrison in Metz.

In 1716, the third battalion was disbanded.

In 1733, at the outbreak of the War of the Polish Succession (1733-35), the regiment was allocated to the Corps de Réserve of the Army of Germany. In 1734, it took part in the siege of Philisbourg. In 1735, the grenadiers of the regiment were present at the Battle of Klausen.

From 1738 to 1742, the regiment was part of the Corps of Observation of the Netherlands.

At the end of 1742, during the War of the Austrian Succession (1740-48), the regiment was sent to Maubeuge. In 1743, it remained in Maubeuge. In 1744, it took part in the siege of Menin and then covered the sieges of Ypres and Furnes. In 1745, it served at the sieges of Oudenarde, Ostend, Nieuport and Ath. In 1746, it took part in the siege of Bruxelles, in the conquest of Antwerp, in the covering of the siege of Namur and in the Battle of Rocoux. It was then sent to the coast of Normandie. In 1747, it was posted at Valognes. In November, it was transferred to Verdun. In 1748, it was at the siege of Maastricht. After the peace, the regiment was sent to Metz.

In 1752, the regiment was sent to the coasts of Provence.

During the Seven Years' War, the regiment ranked 50th and was under the command of:

In 1756, the regiment was part of the reserve of the expeditionary destined to Minorca. It remained on the coasts of Provence. On November 1, its first battalion was part of the French troops, under the command of the Marquis de Castries, sent in Corsica to prevent a British invasion and to fight against Paoli's nationalists. This battalion occupied Calvi until February 1759.

In the Spring of 1759, the regiment was sent to Germany.

By December 30 1760, the regiment had taken up its winter-quarters in Giessen in Germany.

In 1762, the regiment was brigaded with Diesbach Infanterie under the command of the Baron de Zurlauben. From August 8 to 10, it defended the entrenchments of Melsungen on the Fulda River. On August 18, it formed the rearguard of the army. On August 30, it marched towards Friedberg. On September 21, the brigade was present at the Combat of Amöneburg where it lost 100 men.

In 1763, the regiment went to Wissembourg and, in December, to Strasbourg. 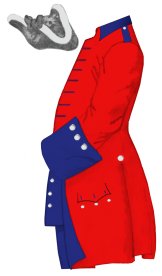 Colonel colour: white cross on a white field; since 1738, the white cross carried the golden motto “Auxilium nostrum a Domino”.