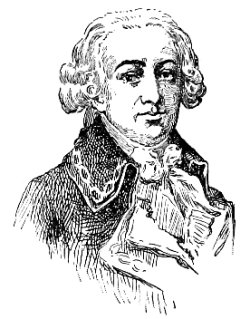 Bougainville was the son of a notary of Paris. During his youth, he demonstrated an outstanding talent for mathematics. However, he studied law and became a lawyer at the parliament. Against his father's wishes, he soon abandoned this profession for the military life. He initially served as a militia officer.

In 1753, Bougainville joined a dragoon regiment.

In 1754, Bougainville published a treatise on integral calculus, as a supplement to De l'Hopital's treatise, "Des infiniment petits".

In 1755, Bougainville's treatise attracted the attention of his superiors and he was sent to London as secretary to the French embassy and was made a member of the Royal Society.

In 1756, at the beginning of the Seven Years' War, Bougainville went to Canada as aide-de-camp to the Marquis de Montcalm. They sailed from Brest in March. Montcalm greatly appreciated his aide-de-camp and came to consider him as a son. In April, under Montcalm, Bougainville took part in the capture and destruction of Fort Oswego on Lake Ontario. During this campaign, he soon learned to despise the Indian allies of France, considering them a necessary evil. In December, Bougainville was second in command of an expedition against Fort William Henry on Lake George. At the head of a force of 500 Canadians and Indians, he ambushed some British troops.

In the summer of 1757, Bougainville returned to Lake Saint-Sacrement (present-day Lake George), this time as Montcalm's aide-de-camp who proceeded to an expedition against Fort William Henry with an 8,000 men army. Lieutenant-colonel Monro surrendered the fort to Bougainville after a siege of 6 days. As per the terms of capitulation, the 2,200 British soldiers were allowed to return to New England under escort. However, the Indian allies attacked the retreating column, slaughtering some 200 men. Montcalm had to personally intervene to stop the massacre.

In July 1758, Bougainville was entrenched at Fort Carillon (present-day Ticonderoga) with Montcalm and his 4,300 men to face the army of General James Abercromby (15,000 men) who planned to capture the fort and then to invade Canada by advancing along the Richelieu valley. On July 8, during the Battle of Carillon, the frontal assaults of the British army were all repulsed. Abercromby lost 1,900 during the battle and retired to Lake George. The French lost 400 men in this action and Bougainville, fighting in the front lines, was lightly wounded. In November, he was sent to France to ask the Minister of War for additional troops and supplies.

At the beginning of 1759, Bougainville vainly pleaded the cause of Canada to the Ministry of War and even to Madame de Pompadour. During his stay in France, he was promoted colonel and received the cross of Saint-Louis. In May, he was back to Canada with only 300 men and insufficient supplies. During the Siege of Québec, Bougainville commanded 1,500 men and was responsible to protect the western access to the city. On September 13, he failed to prevent Wolfe's landing at Anse-aux-Foulons. When he finally realized that the entire British army had landed, it was too late. By the time he had assembled his corps and marched towards Québec, the decisive Battle of Québec between Montcalm and Wolfe had already been fought and the British were master of the battlefield. Bougainville retreated to Montreal. He took part in Lévis' vain attempt to relieve the city.

In September 1760, at the end of the British three pronged attack against Montréal, Lévis and Bougainville, with 2,500 men, capitulated in front of a much superior force.

In 1761, both Lévis and Bougainville were exchanged and returned to France.

In 1763, Bougainville resigned from the army and entered the navy.

After the peace, the French government conceived the project of colonizing the Falkland Islands. Bougainville undertook this task at his own expense. The Spaniards soon expressed some concern with this French initiative and the project was abandoned on condition that Spain should indemnify Bougainville.

In 1766, Bougainville was appointed to the command of the frigate "La Boudeuse" and the transport "L'Étoile". In December, he set sail on a voyage of discovery round the world. However, he first had to stop in the Falkland Islands to deliver them to Spain. After a call at Buenos Aires, he passed the Straits of Magellan and entered into the Pacific.

In 1767 and 1768, Bougainville visited the Tuamotu archipelago, and Tahiti, where the British navigator Wallis had touched eight months before. He proceeded across the Pacific Ocean by way of the Samoan group, which he named the Navigators Islands, the New Hebrides and the Solomon Islands. His men now suffering from scurvy, and his vessels requiring refitting, he anchored at Buru, one of the Moluccas, where the governor of the Dutch settlement supplied his wants. It was the beginning of September 1768, and the expedition took advantage of the easterly monsoon, which carried them to Batavia.

In March 1769, Bougainville's expedition arrived at Saint-Malo with the loss of only seven out of upwards of 200 men. Bougainville's account of the voyage was published in Paris in 1771.

In 1772, he was appointed personal secretary to Louis XV.

Between 1779 and 1782, Bougainville saw active service again in the Navy as commodore. He was attached to the squadron of Admiral François Joseph, Comte de Grasse. Bougainville took part in several engagements in the West Indies.

In August 1781, De Grasse's squadron was sent to reinforce the Franco-American force operating in Virginia. The squadron took part in the blockade of the army of Cornwallis in Yorktown. On September 5, at the Battle of the Chesapeake, Bougainville distinguished himself as commander of the lead ships of the French fleet aboard the "Auguste" (80). He first crippled the "Princessa" (70) and then pounded the "Terrible" (74). By the end of the battle, the Auguste had taken 70 hits in the rigging and 54 to the hull. After the surrender of Cornwallis on October 19, the French fleet returned to the West Indies.

On April 12 1782, Bougainville took part in the naval Battle of Saintes near Martinique where Rodney defeated the Comte de Grasse. During this battle, Bougainville, who commanded the "Auguste," succeeded in rallying eight ships of his own division and bringing them safely into Saint-Eustace. De Grasse and Bougainville were later court-martialled and exonerated. The latter was created chef d'escadre at Brest.

In 1790, Bougainville retired from the navy and reentered the army as maréchal de camp.

In 1792, Bougainville escaped almost miraculously from the massacres of Paris. He then retired to his estate in Normandy. When the Institute was created, he was chosen as one of its member. After the peace, Bougainville returned to Paris and became a member of the Board of Longitude.

In 1796, Bougainville was elected at the Institut Français. He projected a voyage of discovery towards the north pole but failed to obtain the support of the French government.

In his old age, Napoleon I made Bougainville a senator, count of the empire, and member of the "Légion d'honneur".