At the end of 1646, at the death of his father, the Duc d'Enghien became Prince de Condé and the property of the regiment was transferred to the new Duc d'Enghien, Henri-Jules de Bourbon, still a child.

In 1647, the regiment was sent to Catalonia and took part in the siege of Lérida. In 1648, it was transferred to Flanders where it occupied Saint-Quentin and Guise, fought in the Combat of Lens and participated in the investment of Furnes. In 1649, it took part in the capture of the town of Condé.

At the end of 1649, during the troubles of the Fronde (1648-1653), the regiment followed the Prince de Condé in his revolt and retired to Burgundy. On 20 February 1650, the regiment was officially disbanded. After a brief reintegration in the French Army, from 26 February 1651 to 13 September 1651, the regiment fought against France until the Treaty of the Pyrenees (1659). In 1652, part of the regiment took part in the affairs of Bléneau and Étampes, in the Battle of the Faubourg Saint-Antoine and in the defence of Marennes; in 1653, in the combat of Saint-Robert and in the defence of Sarlat where it surrendered. Meanwhile, the other part of the regiment had taken part in the capture and defence of Sainte-Ménehould. After the capitulation of Sainte-Ménehoud, the remnants of the regiment took refuge in Cambrai where they remained until the signature of peace.

In 1659, the regiment was reintegrated into the French Army. It was then ranked according to this date but was not really re-established before 26 October 1667.

In 1668, during the War of Devolution (1667–68), the regiment took part in the conquest of Franche-Comté and was afterwards reduced to only four companies.

In 1686, at the death of the “Grand Condé”, the new Prince de Condé ceded the regiment to his son Louis Henri, Duc de Bourbon. As per an ordonnance dated December 28, the regiment, who had been known as “Enghien Infanterie” since its creation, was renamed “Bourbon Infanterie”, a name that it would keep until 1791.

In 1688, at the outbreak of the Nine Years' War (1688–97), the regiment took part in the siege of Philisbourg and in the occupation of Manheim and Franckenthal; in 1689, in the defence of Mainz and Bonn. In 1690, the regiment was transferred to the Alps and took part in the reduction of Cahours and in the Battle of Staffarda. In 1691, it participated in the capture of Nice, Villefranche, Montalban and Montmélian. In 1692, it was transferred to the Spanish Netherlands and took part in the siege of Namur before assuming garrison duty at Calais and later at Philippeville. In 1693 and 1694, it remained in Philippeville. In 1695, it participated in the bombardment of Bruxelles. In 1696, it campaigned on the Meuse; in 1697, in Flanders.

On 30 December 1698, the regiment incorporated the disbanded La Mothe Infanterie, raised in 1695.

On 1 February 1701, at the outbreak of the War of the Spanish Succession, the regiment was increased to two battalions. The same year, its first battalion campaigned in Flanders. In 1702, this battalion was transferred from Liège to the Army of the Rhine. The same year (1702), by 10 March, the second battalion took part in the unsuccessful defence of Landau. In 1703, the first battalion took part in the siege of Kehl. It later accompanied Villars in his march to Bavaria, taking part in the combats of Hornberg and Munderkirchen and in the Battle of Höchstädt. It then occupied Ulm and Augsburg. In 1704, the first battalion fought in the disastrous Battle of Blenheim. It later returned to Alsace and assumed garrison duty at Schlestadt and later at Kehl where it was rejoined by the second battalion. In 1705, the entire regiment took part in the attack of the Lines of Weissembourg. It then set off for Dauphiné where it contributed to the capture of Soncino and Montmélian. In December, it took an active part in the siege of Nice. In 1706, it was at the disastrous Battle of Turin. It then returned to France. In 1707, the regiment contributed to the relief of Toulon. It was then transferred to the Army of the Rhine. In 1708, it was transferred to Flanders. In 1709, it took part in the defence of Tournai and in the sanguinary Battle of Malplaquet. In 1710, the regiment served in Flanders. In 1711, it distinguished itself in the attack on the Fort of Arleux. In 1712, it took part in the defence of Valenciennes and in the sieges of Marchiennes, Douai and Le Quesnoy. In 1713, the regiment was transferred to the Army of the Rhine and took part in the submission of Speyer, Worms and Kayserslautern. It also served at the sieges of Landau and Freiburg.

By the time of the the Seven Years' War, the regiment counted two battalions and had prévôté (provostship).

During the Seven Years' War, the regiment ranked 39th. It was owned by the comte de Charolais until 1760 and then by the duc de Bourbon. During the same period, its effective commanders were the following lieutenant-colonels:

In 1756, at the beginning of the Seven Years' War, the regiment guarded the coasts of Bretagne.

By August 1 1757, the regiment was stationed at Brest in Bretagne.

In 1758, the regiment was stationed in Bretagne. It joined the Duc d'Aiguillon at Dinan and took part in the Combat of Saint-Cast.

In April 1761, the British launched an expedition against Belle-Isle. On April 7, 200 British sails tried to land troops in the harbour of Andras on the Island of Belle-Isle. The regiment surprised the British in the middle of this landing, inflicted them heavy casualties (800 men killed) and captured 1,000 prisoners, among which a colonel and a major. On April 21, the British made a new attempt and succeeded. Lieutenant-colonel Sainte-Croix resisted until June 8 and, without any hope of being rescued, obtained a capitulation for the regiment which was transported to France on the British ships and was then sent to Arras as garrison. It remained in this town until the end of the war. 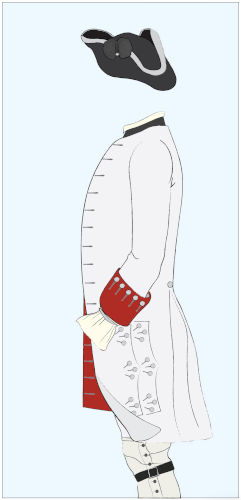 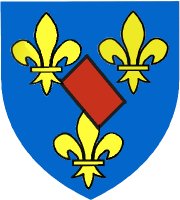 Arms of the House of Bourbon Condé - Source: WikiMedia Commons

The colonel flag was white with a white cross. Ordonnance flags had blue, red, feuille morte (dead leaf) and black cantons. The ordonnance flags remained unchanged from 1667 to 1791.