The regiment was created on September 18, 1684 and formed with companies taken from Picardie Infanterie. It took the name of the Province of Brie. Indeed, expecting a Coalition to soon form against France, Louis XIV raised 30 new regiments from September 1 to 30 for the defence of the various places of the realm. By raising one regiment a day, he avoided any problem of precedence among them. The regiment was given to Armand de Béthune, Marquis de Charost.

In 1687, the regiment garrisoned Calais.

From 22 June 1726 to 1 June 1727, the regiment briefly changed name and was known as “Comte de La Marche Infanterie” before taking back its initial designation as “Brie Infanterie.”

In 1742, during the War of the Austrian Succession (1740-48), the regiment was sent to Bavaria and participated in the relief of Braunau. In 1743, it took part in the defence of Eggenfeld and then returned to the Rhine where it fought in the Combat of Rheinweiler. In 1744, the regiment was transferred to the Alps where it was stationed at Château-Dauphin. In 1746, it took part in the defence of Asti where it had to surrender as prisoners of war on March 4. In June 1747, it was exchanges and took post at Seyne. It then garrisoned Genoa until the end of the war.

During the Seven Years' War, the regiment ranked 87th and was under the command of:

In 1756, the regiment was assigned to the guard of the coasts of Bretagne, a role that it assumed until 1762.

By August 1 1757, the regiment was stationed at Saint-Servan.

In September 1758, during the second British expedition against the coasts of France, the regiment was garrisoning Saint-Malo along with Boulonnais Infanterie. On September 10, it joined the French force assembling at Lamballe to attack the retiring British army. On September 11, it took part to the combat of Saint-Cast where it supported the first assault. Its colonel, the Chevalier de Polignac, was killed during this action. 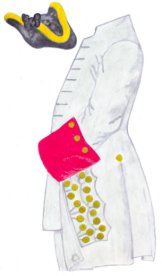 The colonel flag was white with a white cross. Ordonnance flags had a white cross and four red cantons, each traversed by a diagonal yellow band.

Ordonnance flags remained unchanged from 1727 to 1762.