The grenadiers of the regiment were converged with those of the Imhoff Infantry to form the Grenadier Battalion von Stammer.

The regiment was in British service during the Seven Years' War.

On July 26 1757, the regiment took part in the Battle of Hastenbeck where it fought in the first line of the left wing under Lieutenant-General Imhoff.

On February 23 1758, at 7:00 a.m., during the Allied winter offensive in West Germany, the regiment was part of a detachment under the command of the Hereditary Prince who advanced on Hoya on the Weser. Part of the 2nd battalion passed the river and stormed Hoya. On May 26, the regiment was with the main force of Ferdinand of Brunswick in the camp of Nottuln. On May 31, it accompanied Ferdinand in his offensive on the west bank of the Rhine. On June 12, during the aborted attack on the French positions at Rheinberg, the regiment was in the second vanguard of the first column of attack under Major Scharnhorst. On June 23, the regiment took part in the Battle of Krefeld where it was deployed on the right wing under the command of the Hereditary Prince of Brunswick.

On November 29 1760, a skirmish took place at Hedemünden on the Werra between Major-General Breitenbach's detachment (Hanoverian Gardes (2 bns), Brunswicker Leib-Regiment with some cavalry and artillery) and the French garrison under Monfort who was forced to abandon the place and to take refuge in the woods of Münden. Part of the garrison entrenched itself in a redoubt along the river while the other part passed it by boats. The French then resisted all attempts to dislodge them from their entrenchments. The Allied finally retired into the town before retreating during the night. In this action, the Allies lost about 150 men, including 5 officers killed and 6 wounded. 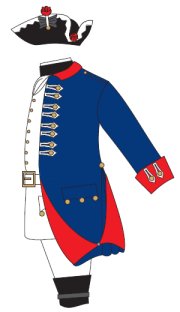 Officers wore uniforms similar to those of privates with the following distinction:

The officers of the grenadier companies wore tricornes and carried spontoons since 1754.

The drummers of the Leib regiment wore a yellow coat edged white with 7 double laced white buttonholes and with red collar, cuffs and turnbacks. The swallow nests on the shoulders were also red and there were 5 white horizontal braids bordered by a white vertical braid on each sleeve.

The drum had a brass base carrying the Brunswick coat of arms with a rim decorated with red and white diagonal stripes and with white cords.

New colours were introduced in 1754 when the army of Brunswick was reorganised. These colours were of the the Prussian pattern with flames and corner monograms.There are no known surviving examples of the colours used during the Seven Years' War.

Here is a tentative reconstruction based on the colours used in 1776 during the American War of Independence with the notable exception that metal is gold instead of silver. This change has been done to match the colour of the buttons and of the grenadier mitre front plate.