As per a royal decree dated 20 January 1694, each province of Spain had to raise a provincial tercio of 1,000 men to reinforce the army. Accordingly, the Province of Burgos raised the “Tercio Provincial Nuevo de Burgos” . It consisted of:

In 1694, the new tercio was not yet completed when it took part in the Battle of Torroella where it suffered heavy losses. It was then assigned to the defence of Gerona which capitulated on 23 August. The tercio then marched to Toledo.

In 1695, the tercio marched to Gibraltar and was transported to Ceuta which was besieged by the Moors. It remained in Ceuta until 1700.

In 1700, the tercio returned to Gibraltar where it relieved the Tercio del Casco de Granada. It later returned to Ceuta.

In 1701, during the War of the Spanish Succession, the tercio was initially stationed in Ceuta on the coast of North Africa. It was soon relieved by other units and returned to Gibraltar and then marched to join the garrison of Cádiz. In 1702, it took part in the defence of Cádiz against an Allied expedition and then returned to Gibraltar. In 1703, it joined the Army of Extremadura under the command of General Villadarias. In 1704, the tercio took part in the invasion of Portugal, in the capture of Marvão and Castelo de Vide and in the storming of the fortified village of San Aleixo before being transferred to participate in the siege of Gibraltar. In 1705, when the Franco-Spanish army raised the siege of Gibraltar, the tercio returned to Cádiz. In 1706, it was assigned to the garrison of Badajoz. On 4 June, a second battalion was raised in Burgos. In October, the tercio successfully defended Badajoz. It then left Extremadura and marched to Castile. In 1707, the tercio was transformed into a regiment designated as the “Regimiento de Burgos”. It took part in the Battle of Almansa and in the siege of Lérida; in 1709, in the victorious Battle of La Gudiña and in the blockade of Olivenza; in 1710, in the storming of Miranda do Douro, in the capture of Carvajales, in the plundering of Bragança, in the Battle of Almenar, in the disastrous Battle of Saragossa, in the Combat of Brihuega and in the decisive Battle of Villaviciosa. In 1712, the regiment took part in the siege of Campomajor. In 1713, it was transferred to the Army of Aragon.

On 20 April 1715, the disbanded “Regimiento de Triana” was incorporated in the regiment.

In January 1717, the regiment marched to Barcelona where it embarked for Sardinia. It then took part in the sieges and capture of Cagliari and Algeri. In 1718, it was transferred to Sicily where it participated in the siege and capture of Messina. In 1719, the first battalion remained at Messina to serve as garrison and defended the place while the second battalion was sent to Porto Longone. In 1720, the first battalion defended Yacca before returning to Spain while the second remained at Porto Longone.

In 1733, at the outbreak of the War of the Polish Succession, the regiment was sent to Tuscany. In 1734, it took part in the Battle of Bitonto and in the reconquest of Naples. It was then transferred to Sicily. In 1735, it took part in the siege of Messina and in the capture of Syracusa and Trapani. It then returned to Tuscany. In 1736, the regiment returned to Spain.

In 1741 at the beginning of the War of the Austrian Succession, the regiment marched to France to join the army destined to the invasion of Lombardy. In 1744, it took part in the Battle of Madonna del Olmo; and in 1746, in the Battle of Piacenza. In 1747, it was stationed in the County of Nice. In 1748, it returned to Spain.

In 1756, the regiment was sent to Ceuta on the coast of North Africa to form part of the garrison.

On 4 October 1757, the regiment was ordered to sail to the camp of Gibraltar. 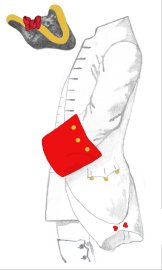 The État militaire (circa 1737-1750) in the Anne S.K. Brown Collection illustrates a fusilier of this regiment with a garance red waistcoat.