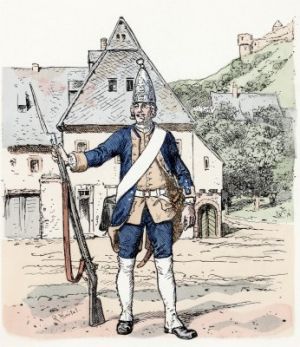 The regiment was raised in 1702 by Colonel Schenck von Schweinsberg.

In 1702, during the War of the Spanish Succession (1701-13), one battalion of the regiment was part of the Allied army quartered in the Low Countries.In 1703, it probably fought in the Combat of Speyerbach (another Hessian regiment had the same name in 1703). In 1704, a battalion of the regiment formed part of the army of the Prince of Hessen, which was posted on the Rhine. In 1707, a battalion took part in the unsuccessful siege of Toulon.

From 1734 to 1736, the regiment constituted a Kreis regiment ,which formed part of the Reichsarmee.

During the Seven Years' War, the successive Kommandeure assuming effective command of the regiment were:

During the War of the American Independence, the regiment was sent to North America in 1776 and served with the British Army against the insurgents.

In 1789 the regiment was amalgamated with Garnisonregiment Nr. V.

On July 24 1757, during the French invasion of Hanover, the regiment took part in the Combat of Lafferde. Two days later, on July 26, it was at the Battle of Hastenbeck where it fought in the first line of the centre.

In May 1758, while the French assembled an army for an offensive in Hesse, the regiment was part of the detachment of the Prince von Ysenburg who had been sent from Westphalia to Marburg to organise the defence of Hesse. On July 23, the regiment took part in the Combat of Sandershausen where it was initially deployed in the centre. The Prince Ysenburg was forced to draw this regiment along with his converged grenadiers from his centre to reinforce a crumbling left flank; leaving only the Hessian militia in the centre. The French commander, the Duc de Broglie, seeing this, ordered Rohan Montbazon Infanterie, Beauvoisis Infanterie, Royal Bavière Infanterie and Royal Deux-Ponts Infanterie, all of which had exhausted their powder, to charge the Allied centre at the point of the bayonet. These regiments managed to rout the Hessian militia troops, forcing the Allies to withdraw. On October 10, the regiment took part in the Battle of Lutterberg where it fought in the first line of the centre as part of Diepenbroick's Brigade, suffering very heavy casualties.

During the first half of 1759, the regiment formed part of the Allied army of Ferdinand of Brunswick. It was attached to Linstrow's Brigade in the second line of the infantry centre. On March 1, its grenadier company took part in the attack on Friedewald. On April 13, the regiment took part in the Battle of Bergen where it formed part of the second column under the Prince von Ysenburg who led the assaults on the village of Bergen. The Prince Ysenburg was killed while leading repeated assaults up a steep slope against abatis around the village without artillery support; the artillery was still in the rear of the baggage train. The French units in Bergen were strengthened by a reserve who blunted the repeated attacks. After repeated attempts to storm the village, the Hanoverian and Hessian troops finally withdrew. In June, the regiment was part of Imhoff's Corps operating in Hesse. On July 15, it was among the Allied troops who occupied Bremen. On August 1, the regiment was part of the centre of the Corps of the Hereditary Prince who attacked and defeated Brissac's French Corps at the engagement of Gohfeld. While pursuing the defeated French army, the regiment fought during the combat of Einbeck (August 7) and Dransfeld (August 10). On August 28, it was also present at the attack on Wetter. From September 4 to 12, it took part in the siege of Marburg. Then, on October 11, it was among the reinforcements sent to the Allied corps besieging Münster.

From February 19 to March 28 1761, the regiment was present at the siege of Kassel. On August 5, it took part in the combat of Kloster Bredelar.

On July 23 1762, the regiment participated in the assault on the Kratzenberg. From August 17 to November 1, it was present at the siege of Kassel. Finally, on September 21, it took part in the Combat of Amöneburg (aka Brücker-Mühle).

Hessian troops wore a uniform in the Prussian style including the grenadier and fusilier headgears. The stock was red for the other ranks and white for officers.

Officers wore a white stock and, as a sign of their commissioned rank, a gorget in button colour, and sash. The sash was of silver silk shot with red flecks .

By the Seven Years War the convention of wearing reversed colours had disappeared. Drummers now wore the same dark blue coat with white and red livery lace placed along the coat seams in seven inverted chevrons along the sleeves and around the 'swallow nests' on the shoulder. Very much a copy of the Prussian style.

Drum barrels were of polished brass and were decorated with the Hessian Lion surrounded by a laurel wreath with a crown above. The Hessian Lion was striped red and white with a red tongue on a royal blue background. The drum cords were white and, for this regiment, the rim was a pattern of alternating white and orange diagonal stripes.

To the present day, a definitive reconstruction of the Hesse-Cassel colours during the Seven Years' War is non-existant. All existing publications are mostly speculative. The Leib (colonel) colour was probably white (maybe red).