On 29 December 1702, during the War of the Spanish Succession, King Philip V asked the Province of Guipúzcoa to raise a tercio. This tercio was raised on 19 January 1703 for the “Maestre de campo” Don Tomás Idiaquez. It was designated as the “Tercio de Guipúzcoa” and consisted of 60 men in twelve companies. On 16 May 1703, the new tercio was reviewed for the first time at Salinas. It then marched to Madrid and finally to Cádiz. In February 1704, the tercio was transformed into a regiment designated as the “Regimiento de Guipúzcoa”. It joined the Army of Extremadura and took part in the invasion of Portugal and in the siege of Salvatierra, in the capture of Segura and Monsanto, in the attack on Castelo Branco, in the storming of the entrenched camp of Sárcedas and in the sieges of Portalegre and Castelo de Vide. In 1705, a detachment of the regiment took part in the defence of Albuquerque and the regiment was at the defence of Badajoz and Játiva; in 1706, in the capture of Alcántara; in 1707, in the siege and storming of Ciudad-Rodrigo; in 1709, in the Battle of La Gudiña and in the blockade of Olivenza; in 1710, in the storming of Carvajales. In 1711, the regiment was at the bombardment of Elvas. In 1712, it took part in the unsuccessful siege of Campo Mayor. In 1713, it escorted convoys between Barcelona and the camps of Tarragona, Cervera and Igualada. In 1714, the regiment took part in the blockades of Oliana and Solsona.

In 1718, the regiment embarked for Sicily where it took part in the sieges and capture of Termini and Messina. In 1719, it participated in the Battle of Francavilla. In 1720, it returned to Spain, landing at Barcelona.

In 1723, the regiment was sent to Navarra

In 1727, the regiment took part in the unsuccessful siege of Gibraltar. It then took up cantonments at Orihuela where it remained until 1732.

From 1732 to 1734, the regiment defended Oran in Algeria. In 1734, it was transferred to Ceuta before returning to Cádiz.

The regiment was disbanded in 1960. Its heir was the Regimiento de Saboya (Savoy Regiment). Either legend or fact, the regimental black saltire pretended to be a Cantabrian or Asturian labarum, an ancient banner.

On 18 March 1761, the second battalion of the regiment embarked at Coruña for the expedition to defend Cartagena de Indias (present-day Cartagena, Colombia). 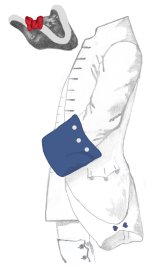 The colonel, lieutenant-colonel sargentos mayores and officers carried a spontoon and an officer stick. They used to heng this stick at the second button of the coat. The type of handle of the officer stick was different for each rank:

Sergeants carried a halberd instead of a spontoon. Fruthemore, their officer stick had no handle.

The coronela (colonel flag) of the regiment was white with a red Burgundian cross terminated in each corner by a medallion carrying the arms of the regiment (a black St. Andrew's cross on a silver field) surmounted by a golden crown. In the middle: the arms of Charles III surrounded by the necklace of the order of the Toison de Oro (Golden Fleece).

The batallonas (ordonnance flags) of the regiment were white with a red Burgundian cross terminated in each corner by a medallion carrying the arms of the regiment (a black St. Andrew's cross on a silver field) surmounted by a golden crown.

Juan for information on the origin and history of the regiment.