In 1662, when war broke out between the Holy Roman Empire and Turkey, the regiment was brought back to full establishment. It was then known as the “Blaue Regiment” (Blue Regiment).

In 1675, after the capture of Trier, Duke Ernst August marched back from the Rhine with part of his troops (including the present regiment) to quench troubles in Lower Saxony. In 1676, these troops captured Stade and occupied the country of Bremen.

In 1679, the regiment formed part of the Hanoverian contingent sent to Schaumburg to observe the Brandenburger forces, establishing its headquarters at Stadthagen.

In 1688, at the outbreak of the Nine Years' War (1688-97), the regiment was transferred to the Rhine. In 1689, it took part in the sieges and capture of Mainz and Bonn. In 1690, it was sent to the Netherlands but returned to Hanover at the end of the year because the contract with Spain had come to an end. In 1692, when a new subsidy was granted by England, the regiment was sent back to the Netherlands where it campaigned till the Treaty of Ryswick in 1697.

In 1702, during the War of the Spanish Succession (1701-13), the regiment took part in the siege and capture of Venlo, Roermond and Liège; in 1704, in the Battle of the Schellenberg and in the decisive Battle of Blenheim; in 1705, in the passage of the Lines near Elixheim and Tirlemont; in 1706, in the capture of Dendermond; in 1708, in the Battle of Oudenarde; and in 1709, in the Battle of Malplaquet.

In 1733, part of the regiment took part in the pacification of Mühlhausen.

During the Seven Years War the successive regimental inhabers (owners) were:

In May 1756, the regiment was part of the Hanoverian Contingent sent to reinforce Great Britain who feared a French invasion. On May 21, the contingent landed at Chatham. At the beginning of November, it became clear that Brunswick-Lüneburg (aka Hanover) was more seriously threatened than England and it was decided to gradually send the Hanoverian contingent back to the continent.

In 1757, the regiment returned to its garrison place. On July 26, the regiment took part in the Battle of Hastenbeck where it was deployed in the centre under the command of Lieutenant-General Wutginau.

On February 23 1758, at 7:00 a.m., during the Allied winter offensive in Western Germany, the regiment was part of a detachment under the command of the Hereditary Prince who launched an attack on Hoya on the Weser. In March, the regiment was at the siege and capture of Minden. On May 26, the regiment was with Ferdinand's main force in the camp of Nottuln. On May 31, it accompanied Ferdinand in his offensive on the west bank of the Rhine. The regiment was initially left at Rees under Major-General von Brunck to guard the bridgehead. On June 23, the regiment fought in the Battle of Krefeld where it formed part of the 6 battalions led by Lieutenant-General von Oberg, deployed in the centre. Oberg was ordered to make diversion towards Sankt-Tönis. On October 10, the regiment fought in the Battle of Lutterberg as part of Major-General Post's Brigade, deployed in the first line of the centre.

In June 1759, the regiment was part of Wangenheim's Corps who had taken position at Dülmen in Westphalia to observe the movement of a French Corps under the Marquis d'Armentières. On August 1, the regiment took part in the Battle of Minden where it was deployed in Wangenheim's Corps between Kutenhausen and the Weser, in the first line of the infantry centre. In this battle it lost Captain-Lieutenant von Bothmer, killed; and Lieutenant Niemeier, wounded. It later took part in the siege of Münster. At the end of the year, it formed part of the reinforcements sent by the Allies to Frederick II in Saxony.

In the spring of 1760, the regiment rejoined the main Allied army. On July 10, it was present the Combat of Corbach where the Hereditary Prince vainly tried to prevent the junction of two French armies. The regiment was attached to the Reserve under Lieutenant-General von Gilsa and did not take part in the fighting.

In 1761, the regiment took part in the siege of Kassel. On November 13, at the end of the campaign in Western Germany, the Allied army took its cantonments to the exception of a corps (including this regiment) placed under the command of Lieutenant-General Conway who took position along the Huve near Einbeck.

By May 23 1762, the regiment was attached to the Allied Main Army led by Ferdinand of Brunswick. On June 24, the regiment fought in the Battle of Wilhelmsthal where it formed part of the 6th column under Spörcken. The regiment then returned to Hanover where it garrisoned Lüneburg.

Hanoverian uniforms were gradually simplified throughout the Seven Years' War. In this article, we illustrate a uniform circa 1756 (Franco Saudelli's plate at the top of the article) and another version circa 1760 (Hannoverdidi's plate accompanying the following table). 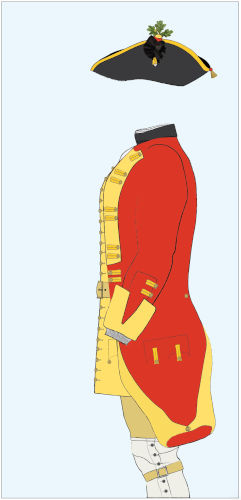 The drum pattern had hoops in alternating middle yellow and red diagonal stripes, white drum cords over a brass drum with the Arms of Hanover in the centre.

Regimental Colour: yellow field; centre device consisting of a trophy of arms containing nude figures and tassels in an inner circular shield; the shield is intertwined with laurels; a mailed arm carrying a sword emerging from clouds above four hillocks and a tree; above is a scroll reading IDEM PACIS MEDIUM QUE BELLI. Hereafter, we present an illustration from the Reitzenstein Sammlung, dating from circa 1761 (left) and the interpretation of Hannoverdidi (right).