This company was created on January 28 1663 with 300 officers from disbanded units.

During the Seven Years' War, the company was under the nominal command of the Dauphin de France (Heir Apparent) while a captain-lieutenant assumed effective command:

The company was disbanded in March 1763 and incorporated into the Gendarmes du Dauphin on June 5 of the same year. 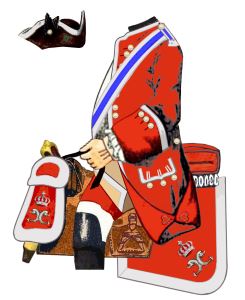 No information yet on the uniforms worn by trumpets and kettle-drummers.

The standard (exceptionally called guidons in the Gendarmerie de France) was identical to the standard of the Gendarmes du Dauphin. It was made of silk and had a white field heavily decorated with silver and gold embroideries, fringed in gold and silver; centre device consisting of a scene depicting 3 dolphins playing around a ship navigating a stormy sea with the motto “SUNT PERICULA LUDUS”. 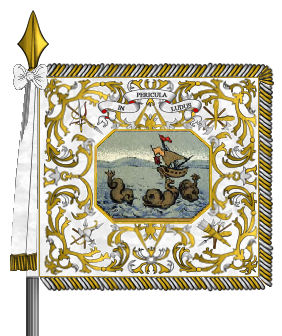 Note: some authors mention that the reverse of this standard was sown with golden fleurs de lys. However, the standards of all companies of the Gendarmerie de France had identical obverse and reverse.

Standards were carried on blue tournament lances by troopers designated as porte-étendards (even though the standards of the Gendarmerie de France were called guidons).