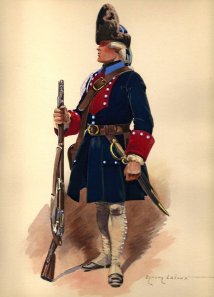 N.B.: this grenadier seems rather to correspond to the new regulation of 1758

In August 1706, the garrison of Fort Louis, the new citadel of Pondicherry, consisted of 5 companies and 13 officers (1 commander, 1 major, 1 engineer, 4 captains and 6 lieutenants).

In 1712, the engineer Noyon received command of the troops of the Royale Compagnie de France des Indes Orientales.

On December 15 1719, a battalion raised in Alsace by the Chevalier de Karrer for the Compagnie des Indes was assembled at Besançon.

In 1721, the Royale Compagnie de France des Indes Orientales merged with the Compagnie d'Occident to become the Compagnie des Indes (French counterpart of the East India Company). The same year, Philippe II, Duc d'Orléans, who was regent of France during Louis XV minority, issued an ordonnance allowing the Compagnie des Indes to raise troops for the defence of its trading posts in India, Mascarene Islands and Guinea coast (Sénégal) as well as its harbour of Lorient in France.

At the end of 1744, there were 3 companies of European infantry at Pondicherry, each of these companies consisting of:

The troops raised by the Compagnie des Indes included infantry, dragoons, horse grenadiers and artillerymen. In the 1740s, at the height of the activities of the Compagnie des Indes in India, when Dupleix and La Bourdonnais directed the destinies of the company, these troops totalled 250 officers and 22 companies, each of 300 men. These European troops were supplemented by some 10,000 Indian sepoys (half in Deccan, half in Carnatic).

From 1746, a large part of these troops were placed under the command of Charles Joseph Patissier de Bussy-Castelnau, more simply known as Bussy. In September 1746, troops of the Compagnie des Indes took part to the capture of Madras.

During the War of the Austrian Succession, in September 1746, the troops of the company took part in the capture of Madras (present-day Chennai). On November 2 and 3, a squadron under Bussy formed part of the force who repulsed a British attempt to retake Madras. The conflict continued in 1747 and 1748 and the troops of the company were involved in various engagements. In August 1748, these troops took part in the successful defence of Pondicherry (present-day Puducherry). In 1748, at the end of the conflict, the European troops of the Compagnie des Indes totalled some 1850 men.

After the war, the French and the British continued to confront each other by assisting Indian princes in their military operations and supplying troops. In 1749, the Volontaires de Bussy were instrumental in the victory of Chanda-Sahib et de Muzaffar Jung at the battle of Ambour which expanded French influence to Deccan.

In 1750, troops under Bussy and Latouche assisted Muzaffar Jung during the siege and capture of the fortress of Gingee. On that year, there were only 10 European companies (each of 120 men for a total of 1200 men) in India:

Each of these companies consisted of:

In 1750-51, some 400 recruits arrived in India aboard vessels belonging to the French Navy or to the Compagnie des Indes.

In the Summer of 1751, Bussy at the head of troops of the company (500 Europeans and 5,000 sepoys) assisted Salabat Jung (Muzaffar Jung's successor) against the city Aurangabad who had rebelled against his authority. They then marched towards Poona to face the Maratha army which they initially repulsed. On November 22, Bussy surprised them during a religious celebration, forcing them to abndon their camp precipitously. On November 27, Bussy then took and sacked Ranjangaon and utterly destroyed Talegaon Damdhere. The troops of the company helped Salabat Jung to defeat the Maratha on the banks of the Ghodnadi River. On January 7 1752, an armistice was concluded with the Maratha and Salabat Jung's army along with the French contingent retreated across their own frontier.

In 1751-52, nearly 500 recruits arrived in India aboard vessels belonging to the French Navy or to the Compagnie des Indes.

By January 1752, there was also a Portuguese company consisting of:

On September 29 1752, a new threat appeared when an army of 150,000 men arrived at Aurangabad to reclaim Deccan for Ghazi-ud-din Khan Feroze Jung II. However, the latter died on October 16. On November 25, Salabat Jung concluded the treaty of Bhalki whereby he ceded the the sacred town and fort of Trimbak and the whole country west of Berar from the Tapti to the Godavari to the Maratha. In 1753, Bussy was ordered to ask Salabat Jung for the grant of the four Northern Circars, namely Ellore, Mustafanagar, Rajahmundry and Srikakulam (Chicaole), towards the maintenance of the French contingent.

In 1752-53, nearly 1500 additional recruits arrived in India aboard vessels belonging to the French Navy or to the Compagnie des Indes.

Early in April 1753, a minister of Salabat Jung appealed to the British, to leave no stone unturned and to assist him to expel the French. His letter was intercepted by the spies of the French. The minister tried to harass the French by withholding their salaries. To the original detachment of 300 Europeans and 2,000 sepoyss, Bussy added further a battalion of 5,000 sepoys, and all these were entirely under the personal command of Bussy. On June 25, Bussy started from Machilipatnam and reached Hyderabad on July 15 with the firm resolve not to leave Deccan unless a financial agreement was reached. Bussy restored order and discipline among his 500 Europeans and 4,000 sepoys. After negotiations, Bussy cleared the arrears of pay of the troops partly by raising money from the bankers and partly by advancing from his own private funds. When the French realised that Salabat Jung allegiance was faltering, Dupleix sent to Bussy an additional force of 350 men. Of these, Bussy, dispatched 150 men to Machilipatnam, under the command of the Marquis of Conflans. Feeling himself sufficiently strong, Bussy now decided to march against Aurangabad which he reached in November. Bussy came to an agreement with the rebellious minister Syed Lashkar Khan in exchange with the cession of the Northern Circars to the French. On November 23, the treaty of Aurangabad was signed between Salabat Jung and the French. By this treaty the four Northern Circars, Ellore, Mustafanagar (Kondapalli) Rajahmundry and Srikakulam (Chicacole) were granted to the French. Soon after receiving the patent for these countries, Bussy, instructed the French agent at Machilipatnam to take charge of those territories, and he dispatched 150 Europeans and 2,500 sepoys to French commander Moracin at Machilipatnam, to bring those territories under the French control.

On August 1 1754, M. Godeheu arrived in Pondicherry to replace Dupleix. On December 31, Godeheu signed a treaty with Saunders, the British governor of Madras whereby French troops would not bring their support to any Indian princes.

On February 16 1755, M. de Leyrit succeeded Godeheu as governor of French India. The same year, de Leyrit sent a force of 1,500 men of the Compagnie des Indes in an expedition in Carnatic to collect tribute from Terriore. The expedition successfully recovered tributes. M. Maissin then continued his advance eastward to Palamcotah, a place considered as belonging to the dominion of the Nawab of Arcot, a British Ally. The East India Company threatened to intervene military. The French Governor then ordered his troops to retire from the contested region.

On the eve of the Seven Years' War, the Compagnie des Indes had:

Each company counted some 120 men. Besides these European companies, the Compagnie des Indes employed several thousands sepoys organised on the same line.

In 1756, 700 Europeans and 1,500 sepoys of the Compagnie des Indes relieved Vellore besieged by a British force under Major Killpatrick.

In March 1757, the British launched an expedition against Chandernagore. The French garrison consisted of 146 European infantry, 300 Sepoys, and about 300 militia formed from amongst the European inhabitants of the town; and there were, in addition, a number of French sailors, drawn from the ships lying under the guns of the fort. On March 23, Chandernagore surrendered. Law escaped from Chandernagore with a small unit of the Compagnie des Indes. In April, M. de Leyrit, the French governor of Pondicherry, initiated operations in Carnatic. ordered M. d'Auteuil to attack the British fort of Elvasanur. D'Auteuil left on April 6 with a force consisting of 200 Europeans and 1,000 Sepoys and soon captured Elvasanur. The same month, the marquis de Bussy was preparing to march to the relief of Chandernagore in Bengal at the head of 500 French and 4,000 Sepoys when he heard that the place had surrendered. On May 12, d'Auteuil concentrated all his troops (150 Europeans, 2,000 Sepoys and 10 pieces of artillery) and, leaving Pondicherry almost defenceless, advanced on Trichinopoly. Meanwhile, on May 15, Bussy's force laid siege to Vizagapatam (today Visakhapatnam). By the end of May, d'Auteuil had been forced to retire to Pondicherry but Bussy had captured Vizagapatam. On June 23 in Bengal, a small detachment of artillery under M. de Saint-Frais took part in the battle of Plassey. Meanwhile in June on the coast of Coromandel, the French sent Colonel Saubinet with 400 Europeans and 200 sepoys to lift the siege of Wandewash but they arrived to late to prevent the surrender of the place. On June 15, Saubinet advanced on Conjeeveram with 200 Europeans, 500 Sepoys and 2 guns. On June 19, Saubinet entrenched his force near Wandewash. By July 11, a British force of about 2,700 men (700 men from the 39th Foot and from the Madras European Battalion, 2,000 Sepoys) was facing a French force of some 2,300 men (700 European infantry, 100 hussars, 1,500 Sepoys) at Wandewash. On July 17, a British attack was repulsed. On July 26, the British retired towards Conjeeveram. On September 9, the Chevalier de Soupire arrived at Pondicherry from France with 2 battalions of regular infantry (Lorraine Infanterie) to take command of the French military force in India. Bussy sent letters to the Chevalier de Soupire to expose him his difficulties to maintain French sovereignty in Deccan and to ask for reinforcements. However, the British successes in Bengal deeply preoccupied the Chevalier de Soupire who answered Bussy that he could not send him the required troops and funds. However, he sent M. d'Estrées to assist Bussy. The latter was forced to sell his horses, elephants and jewels to pay his troops. In mid September, Saubinet with a force of 400 Europeans, an unspecified number of sepoys) and some siege artillery besieged and stormed the fort of Chittapet. A few days later, he besieged and captured Trinomali.

In April 1758, Law and his small detachment managed to reach Delhi. The same year, troops of the Compagnies des Indes took part in the operations on the coast of Coromandel and in operations in Deccan where, on December 9, the Bataillon des Indes and 6,000 sepoys were at the battle of Condore. Troops of the company were also present at the siege of Madras.

In 1759, troops of the Compagnies des Indes took part in the defence of the region of Masulipatam and in the operations on the coast of Coromandel. Meanwhile, a small force under the command of Law had assisted an Indian prince during the siege of Patna.

In 1760, troops of the Compagnies des Indes took part in the operations on the coast of Coromandel where, on January 22, the Bataillon des Indes fought in the battle of Wandewash. From September, troops of the company were also present at the defence of Pondicherry who finally surrendered in January 1761.

The uniforms of the various units of the Compagnie des Indes is not very well defined. For European troops, there were probably uniforms of three general styles:

Other troops were also mentioned. Here are a few examples of the uniforms of these troops:

Horse Guard of the Governor-General of the Compagnie des Indes in 1744 - Source: Jean-Pierre Loriot

Furthermore, in 1744, the Governor-General had a mounted escort of 12 guards. Their captain wore a similar uniform with lace on the seems and edges. There were also 300 Indian sepoys acting as Garde à pied (Foot Guard).

The present article contain texts from the following publications:

Reid, Stuart; To the Ends of the Earth. European Armies in the French-Indian Wars and the War for India, Ed. Partizan Historical 2008

Jean-Pierre Loriot for the additional information and uniform plates provided