In the XIVth Century, firearms were widely introduced in European armies. From the introduction of the simple “firing tube” to the hacqubute, later evolving into the arquebus and the musket, the reign of the mounted armoured knights on the battlefields gradually came to an end.

Firearms of larger calibres, the cannon, were used in increasing number by armies during the sieges of castles and fortified places to the point where they significantly influenced the design of fortifications. Famous personalities such as Albrecht Dürer (1471 - 1528) and Leonardo da Vinci (1452 - 1519) created plans for the construction of fortifications. The plans to rebuild a modern fortress at Biberburg (present-day Cerveny Kamen/Slovakia) were probably made by A. Dürer. Repeatedly, military institutions (the Hofkriegsrat in the case of the Habsburg monarchy) confided the design and construction of such works to civilian engineers and builders. In fact, there was no engineer corps in any army.

We have to wait till the XVIIth Century to see engineers mentioned in an order of battle. They were usually part of the staff of the Quartermaster-General. They were officers coming mainly from the infantry regiments, appointed to a specific task during a campaign: construction of field fortifications, establishment of army camps and siege works. For example, the staff of Prince Eugène de Savoie, during his campaign against the Turks in 1697, included the following engineers (unspecified military ranks): Nicolaus Peroni, Ludwig Peroni, la Vergne, Wallner, Caspar Dörk, Ertrich, Lambert, Holstein, Serano, Rauschendorf, Lagrano.

In the second half of the XVIIth Century, French were the uncontested leaders in the science of fortress construction. A professional Engineer Corps was established by Sébastian Le Prester de Vauban, chief-engineer of King Louis XIV. This corps received extensive training and was organised with military ranks and pay structure. Under Vauban's leadership, the frontiers of France were protected with a chain of countless highly modern fortifications.

Situation in the Habsburg domains was very different. Austrian engineers were little more than hired architect and draftsmen.

In 1717, Prince Eugène de Savoie founded an academy in Laimgrube near Vienna for the training of engineers for the army. In 1718, a second academy was established in Bruxelles. Shortly thereafter, an engineering school was opened in Prague. Unfortunately, these schools provided a very limited number of professional military engineers to the army. Teacher quality was poor (hardly anyone had ever taken part in a siege) and officers attending these schools preferred to serve in the infantry where they had more chance of a faster career.

Another school was a private academy in Vienna-Gumpendorf, which was reorganized in 1715 as a specialized engineering school and expanded in the 1730s. This academy counted Pro-Director Harsch, GFWM Rochepine and Colonel Giannini among its students, all peoples who would later play an important role.

On February 6 1747, Maria Theresa agreed to a proposal of her War Council to form a Corps of Engineers of four brigades (respectively from the Hereditary Lands, Hungary, Italy and the Austrian Netherlands, the latter already in existence). Princes Charles Alexander of Lorraine, governor-general of the Austrian Netherlands, was appointed General-Genie-Direktor. Colonel Paul Ferdinand Bohn was his Pro-Director (deputy). Brigades initially consisted of the colonel and of some engineers, the remaining staff had to be recruited across the entire monarchy.

On July 20 1747, a regulation was issued for the Corps ef Engineers. Officer ranks would be equivalent to those of the field army. They were responsible for inspection of the existing fortifications and defensive works and for plans for new places. Furthermore, these officers were assigned to the construction of field fortifications and to the organisation of camps for the field armies when staff was available to do so. The Corps had a theoretical strength of about 98 officers and Kondukteur but was rarely at full strength.

During the War of the Austrian Succession, most campaigns, took place in regions defended by few fortresses.

One of the most renowned officer of the Corps of Engineers was Ernst Friedrich Alexander, Marchese and Count Giannini, FML and Grand Cross of the Maria Theresa Order.

As late as 1787-88, even though by then there already existed a 500 men strong Mineur Korps, Emperor Joseph II had to ask his Exchequer for 200 additional miners from Schemnitz (present-day Banska Stiavnica, Slovakia) when he resolved to build the Fortress of Josefstadt (present-day Josefov/CZ). These miners were confided to Engineer Cornelius Hell. These miners were considered part of the army and paid according to regulations. Lieutenant-Colonel T. von Toschnowitz assumed overall command during the construction of this fortress.

During the Seven Years' War, the corps was under the command of successive of Pro-Director:

At the beginning of the Seven Years' War, in 1757, the Austrian army proceeded to the invasion of Silesia which was defended by several fortresses. In October, the Austrian army skilfully surrounded Schweidnitz. However, at the end of October, when GdC Nádasdy laid siege to the Fortress of Schweidnitz, he had no suitable officer to expertly conduct operations. In this situation, Maria Theresa resolved to entrust Brigadier Riverson, recommended by King Louis XV of France, with this task. Her decision was a humiliation for the Austrians and their Corps of Engineers!

In 1758, despite the fact that the Corps of Engineers had a theoretical strength of about 98 officers, only 30 were available field service! This situation could be attributed to rampant nepotism in the corps which was increasingly criticized by responsible officers. King Louis XV sent one of his best colonel of artillery and engineering, Jean-Baptiste Gribeauval, as advisor to the Austrian army. As requested, he submitted his assessment of the Austrian Corps of Engineers to the Hofkriegsrat. Soon, radical measures were taken to improve this corps.

In 1759, after the death of Colonel Bohn, Field-Marshal Daun recommended GFWM Ferdinand Philipp Harsch, who came from a noble Alsatian family, as his successor. In his new function, Harsch let all future young engineers attend the institution of the Gumpendorferstrasse before being sent to the army with proven records.

In general, engineers were not held in high esteem among the Austrian army. Nevertheless, they played an important role in the war events. Since engineers were not usually of nobility, they were not treated very well by field officers who often transmitted their orders in the form of threats. However, army officers were not in a situation where they could effectively supervise the construction of important field works. In fact, engineers and field officers could effectively complement each other when officers could be persuaded to cooperate.

By 1760, only the Netherlander brigade (some 30 men) was still operating autonomously; the 3 other brigades had been converged and reinforced (a total of about 120 men). On February 2, Gribeauval submitted a new assessment where he recommended the establishment of companies of sapeurs who would take post along the entrenchments to support the efforts of the soldiers working on them. The Hofkriegsrat feared the high costs of such measures, but Maria Theresa gave her consent. Furthermore, on February 27, she stipulated that Harsch would, from then on, assume complete control of the institution of the Gumpendorferstrasse. 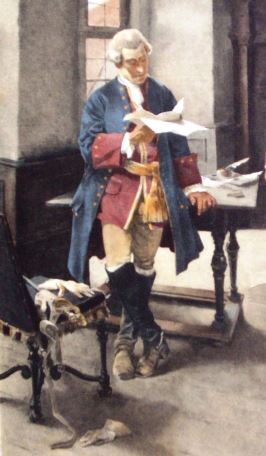 The Bautzen manuscript differs in some respects: it has 2 persons, both of officer rank. The obviously lower ranking one wears a uniform similar to the one given above, but with red lapels with straight-laced buttonholes and a golden shoulder strap (left); red waistcoat with 2 rows of closely set buttons; and red breeches.

The higher ranking person shows his rank by scalloped braiding on the hat, a golden aiguillette arrangement on right shoulder and a number of wavy golden buttonhole braids with tassels on lapels, cuffs and coat pockets.

An earlier uniform is shown in Raspe (and following him, in Knötel's Uniformkunde Nr.44) with the following differences: hat with small golden border and cockade fastening; white coat without lapels, 2 rows of 13 golden buttons; Red waistcoat and breeches