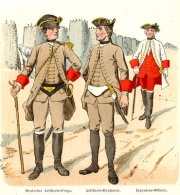 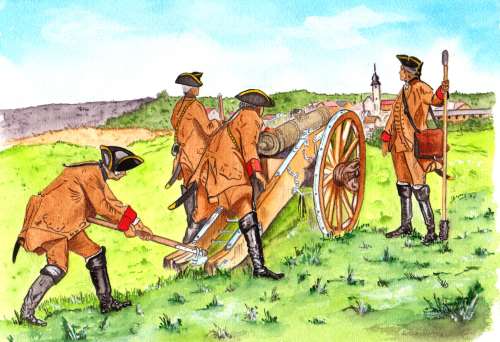 There are so many conflicting sources on the uniforms of the Austrian artillery that we consider important to have an introductory texts to the present section.

The history of the Austrian army (Geschichte der K. und K. Wehrmacht, Vol. IV) edited by Major Anton Semek and published in Vienna in 1909 clearly states that, from 1748, the regulations specified a white coat for the artillery. The same source also mentions that, till 1772, the artillery had to procure their uniforms by themselves.

An additional consideration is that the plates in the contemporaneous printed works might have faded too, although the colours illustrated in the paintings should have remained rather faithful.

It should be noted that the question was debated in the magazine Zinnfigur in 1942 and 1943 but no clear conclusion resulted.

In 1964, confronted to these numerous conflicting sources, Bleckwenn concluded that the artillery had adopted dark grey or grey brown uniforms but that the fact was not immediately recognized by regulatory offices. Furthermore, he attributed the variations observed in the various contemporaneous iconographic sources to the variability (different manufacturers, different dyestuff) and instability of dyeing in this period. Colours faded in the sun and rain or by washing.

We agree with Bleckwenn and propose hereafter a few interpretations of the variations of colour of the uniform. 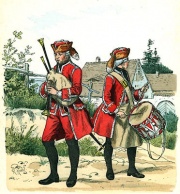