This Swiss regiment of 12 companies was raised on January 1, 1690 across the 13 Swiss Cantons. It was initially designated as “Jeune-Salis” to distinguish it from another regiment whose proprietor was also named Salis.

In February 1715, the regiment incorporated the remnants of Pfiffer Infanterie which had been raised in 1702. The regiment garrisoned Avesnes for most of the following years and was reduced to two battalions.

In 1733, at the beginning of the War of the Polish Succession (1733-35), the regiment was increased to three battalions and served on the left bank of the Rhine. In 1734, it was increased to four battalions. In October 1735, it joined the troops assembled on the Moselle and its grenadiers distinguished themselves in the Combat of Clausen. The regiment then occupied Kick.

On January 8, 1737, the regiment was reduced to two battalions.

In 1753, the regiment was stationed at Sarrelouis.

On April 1, 1756, the regiment, which had prévôté (provostship), was reduced to two battalions.

During the Seven Years' War, the regiment ranked 90th and was under the command of:

Somewhere between August 23 and September 6, 1757, the regiment joined the Army of Saxony, led by the Prince de Soubise, in the area of Erfurt and Eisenach, for the planned invasion of Saxony. On September 27, it was brigaded with Rohan Montbazon Infanterie and Planta Infanterie under the Marquis de Custine in the second line of the left wing of the Franco-Imperial Army. On November 5, under the Comte de Lorges, it took part in the disastrous Battle of Rossbach where it was placed in the second line of the centre. It was among the two French regiments (the other was Planta Infanterie) which stood firm against the charge of the Prussian cavalry. In this battle, the regiment lost Captain Garrigue, and Lieutenants Borrer, Bury and Alion, killed; and Captains Balthazard, Rabel and six lieutenants , wounded. At the end of the year, it took up its winter-quarters in Bad Soden in Hessen.

In March 1758, during the Allied winter offensive in Western Germany, the regiment retreated towards Düsseldorf and Deutz with the bulk of Broglie's Army. It passed the Rhine on April 3 and 4. In the first days of June, as a French army prepared for an offensive in Hesse, the regiment was part of a detachment under the command of the Duc de Broglie who followed up Ysenburg during his retreat. By July, it had joined Soubise's Army assembling near Friedberg in Hesse. On July 23, the regiment took part in the Combat of Sandershausen where it was placed in the first line of the right wing and was engaged against the Hessian units occupying the Ellenbach woods. In the morning of September 27, the regiment entered into Kassel to prevent its capture by an Allied army under the command of Oberg. On October 10, it was present at the Battle of Lutterberg where it was placed in the centre of the second line. The regiment then spent winter near Frankfurt.

On April 13 1759, the regiment took part in the Battle of Bergen where it formed part of the third line of the right wing under the command of Prince Camille de Lorraine. The regiment was deployed in column behind the village of Bergen. In June, during the French offensive in Western Germany, the regiment was part of the main army under the command of the Marquis de Contades where it was deployed in the second line, on the left wing of the infantry centre. On August 1, it was not present at the Battle of Minden, being detached under de Buizenwal in Hameln.

In 1763, the regiment returned to France where it garrisoned Saarlouis. 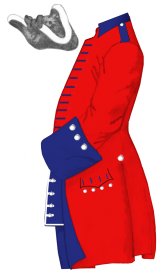