This regiment was the oldest of the Austrian Army. As soon as 1616, Heinrich du Val Count Dampierre received the authorisation of Archduke Ferdinand to raise an arquebusier company. He then fought with this company against the troops of Venice in Friuli. The company was later increased to 500 men. In 1618, Dampierre and his arquebusiers campaigned in Bohemia. After its junction with Count Buquoy near Deutsch-Brod (present-day Havlíčkův Brod/CZ) on 9 September, the unit followed the army to Czaslau (present-day Čáslav/CZ) to confront the rebel army of Count Thurn. However, none of the commanders took the risk of an open battle. The imperial army marched through Iglau (present-day Jihlava/CZ) to Austria. In the last months of that year, discussions started about the creation of a second Dampierre regiment. It was called “Florentiner” because it was under pay of Cosimo II of Medici.

The relevant decree was signed on 6 March 1619. The regiment consisted of 500 men (200 cuirassiers, 300 arquebusiers). Colonel-Lieutenant Ernst Count Montecuccoli (formerly serving in Dampierre's original arquebusier regiment) enlisted 300 troopers in Lotharingia (present-day Lorraine) and 200 in Austria. By June, the regiment had been completed and was probably stationed in Vienna. Its staff consisted of Lieutenant-Colonel Ernst Count Montecuccoli and of Captains (Rittmeister) Florimund Baron d´Ardre de Feicamps, Giacomo Count Strozzi, Octavio Count Piccolomini and Laurenzi. It soon had the opportunity to show its bravery and acquired great fame when, on June 6 1619, Kaiser Ferdinand II met 16 Austrian deputations requiring some arrangements. During these negotiations, the impertinent Andreas Thonradel seized the emperor by his waistcoat saying “Ferdinand will you not sign!”. The trumpets of the regiment immediately sounded. The Inhaber (proprietor) of the regiment, General Count Dampiere, sent Colonel Gebhardt Baron Saint-Hilaire with 500 troopers (3 coys of old Dampierre Arquebusiers, 1 coy of “Florentiner” and 1 coy of “Laghi”) towards Vienna where they deployed on the place. The frightened deputies fled and Kaiser Ferdinand II thanked the brave cuirassiers who had saved him. In recognition for this action the monarch gave to the regiment the marked privilege of, when under duty, marching at the sound of trumpets and with flying standards through the Hofburg and Residenzstadt. Furthermore the regiment was allowed to deploy on the Hofburgplatz (present-day Franzensplatz) and to set up tables for recruitment on this same place. The commander of the regiment had his quarters in the Hofburg, bringing with him the standards of the regiment. The commander of the regiment was also allowed to present himself in full arms in front of the emperor. The regiment also received the assurance that it would never be disbanded or reduced. Finally, no member of the regiment could be executed for a crime. Exceptionally, when someone had to receive death punishment, he had to be transferred to another regiment before the execution of the sentence. These privileges were maintained by the successors of Ferdinand II. For his part, Dampierre was promoted to General Feldwachtmeister (GFWM) and received command of an entire corps of around 5,000 men (including both of his horse regiments).

At the end of July 1620, Dampierre's Corps went to Moravia and participated in defence of Vienna against the forces of Gabriel Bethlen and Thurn. Afterwards, Dampierre advanced with a part of his corps on Pressburg (present-day Bratislava/SK) where he lost his life on 9 October. His regiments did not participate in this raid, both marched to Bohemia where, on 9 November, they fought in the Battle on the Weißer Berg near Prague. The old arquebusier regiment was under the command of Lieutenant-Colonel Jakob Count Dampierre while the “Florentiner” were under the command of Lieutenant-Colonel Don Pietro de Medici.

In 1626, the “Florentiner” unit was converted into a cuirassier regiment.

In 1628, the regiment was temporarily reduced to 3 coys.

In 1636-1637, the regiment was significantly understaffed and received additional troops from the disbanded Ratkay Regiment. These reinforcements brought its strength back to 8 coys.

In 1679, the regiment was reduced from 12 to 6 companies. Then the 6 remaining companies were incorporated into other units.

In 1683, the regiment was recreated from a kernel of 500 men contributed by Mercy Cuirassiers.

At the beginning of the Great Turkish War, in 1683, the regiment took part in the campaign against the Turks. It was in Vienna during the siege of the city. On August 18, the colonel (and owner) of the regiment, Baron Ludwig Dupigny, with 60 cuirassiers, without orders from the commander of the place, attempted a sortie. Dupigny, the Rittmeister (captain) Chavellico de Chovari and 30 cuirassiers were killed during this failed attempt. However, the Turks lost even more men. Later during the siege, Rittmeister Dudare was also killed. In 1684, the regiment was at the siege of Ofen. In 1686, it took part in the expedition in Upper Hungary and in the encounter of Szegedin. In 1687, it was at the Battle of Mohacs; in 1688, at the siege of Belgrade; in 1689, at the encounter of Patacin. At the engagement of Nissa, it was part of the rearguard under General Veterani who saved the artillery and baggage train from the attacking Turks. In 1691, it fought in the Battle of Szlankamen. In 1692, it took part in the attempt against Gyula and in the siege of Grosswardein (present-day Oradea/RO).

In 1701, at the beginning the War of the Spanish Succession, the regiment left its quarters at Enns in Upper Austria and marched towards Italy by Salzburg and Tyrol. At this time it consisted of 12 companies of 100 horse each. The train of prince Eugen of Savoy accompanied the regiment. On August 16, lieutenant-colonel count Mercy engaged the enemy near Pontoglio while reconnoitring its positions. In Sepember, Rittmeister Hautefort took some prisoners during another engagement. On October 5, at the head of a small force of infantry and cavalry (about 1,400 men) fought an engagement near Pizzighelone. On November 17, Rittmeister Hautefort led a successful raid against the enemy headquarters. On February 1 1702, the regiment took part in the assault of Cremona where count Mercy distinguished himself so much that he soon received the colonelcy of a newly raised regiment. On August 15 of the same year, the regiment fought at the battle of Luzzara. During the campaign of 1703, it served in the army of count Guido Starhemberg. In 1705, it fought at the battle of Cassano where its Inhaber prince Josef Lothringen was mortally wounded. In 1706, the regiment took part to the relief of Turin. In 1712, it was in the Netherlands at the sige of Quesnoy.

In 1716, the regiment participated in the campaign against the Turks where it fought at the battle of Peterwardein and besieged Temesvar. In 1717, it took part to the siege of Belgrade in general Martigni's Corps. It also fought in the battle of Belgrade on August 16.

During the War of the Polish Succession, the regiment initially served on the Rhine against France in 1734 and 1735. Saint-Germain, the future French minister of War under Louis XVI, then served as Rittmeister in the regiment.

During the war against the Turks, the regiment fought in the engagement of Timok in 1737. The same year, it protected the artillery and baggage trains during the retreat from Fort Elisabeth. In 1738 it participated to the engagement of belgrade and, in 1739, to the battle of Krotzka where it suffered very heavy losses (its colonel, 5 squadron leaders, 4 officers and 92 men killed, 5 officers and 76 men wounded).

At the beginning of the War of the Austrian Succession, the regiment was stationed in Hungary. In 1741, it was at the battle of Mollwitz. On May 17 1742, it fought at the battle of Czaslau. Later the same year, it was at the siege of Prague. During the campaigns of 1743 and 1744, the regiment was assigned to the army of prince Carl von Lothringen and served on the Rhine. In 1745, it fought at Hohenfriedberg (June 4) and Soor (September 30). At the end of the war, it was stationed in Hungary.

In 1756, when the war broke out, the regiment was stationed in Chtudim in Bohemia. On October 1, it took part to the battle of Lobositz. It was in the second line of the cavalry of the right wing under the command of major-general Fürst Lobkowitz. However, these cavalry units were deployed in the centre of the Austrian positions. During the battle, Lobkowitz was wounded and captured, and major Minutillo distinguished himself.

By August 2 1758, the regiment served in the second line of the main Austrian army under the command of Daun near Jaromirs. Daun was following up the Prussian army retiring through Bohemia after the failure of the Prussian invasion of Moravia. On October 14, the regiment fought at the battle of Hochkirch where it was deployed in the leftmost column under O'Donnell, to the west of Steindörfel. It particularly distinguished itself during this battle. Two Prussian battalions had taken position on a hill on the Austrian flank. From this height, they could easily fire upon the nearby Austrian units. Without leaving any time to the Prussians to take full control of this strategic position, lieutenant-colonel baron Franz Bosfort launched a charge with two squadrons, breaking the two Prussian battalions and capturing their four flags. Bosfort later received the cross of the Maria-Theresa Order for this act of bravery and was promoted colonel of the Portugal Cuirassiers. The same year, the regiment took part to the combat of Ebersbach.

During the campaign of 1759, the regiment was assigned to the army of field-marshal Daun. By mid August, the regiment was part of Buccow's corps posted in Lusatia. On September 2, it took part in the combat of Sorau. In the order of battle of September 18, it was part of the first line in the brigade of major-general Bettoni. The regiment participated to the assault on Greiffenberg. Its carabinier company was converged with three similar companies under lieutenant-colonel count O'Donell. This Carabinier company fought at Kunersdorf under Loudon.

On September 17 1760, in the combat of Kunzendorf, the colonel of the regiment, Franz baron Reischach, along with the colonel of Portugal Cuirassiers, baron Bosfort, formed the vanguard at the head of the converged carabiriers and led the first charge. On November 3, the regiment was at the battle of Torgau where lieutenant-colonel Hermann, lieutenant Mallin and 6 men were taken prisoners. The regiment lost three men killed.

In 1761, the regiment stayed with the main army. Only the Carabinier company saw action at the storming of Schweidnitz.

In 1762, the regiment remained in Silesia and did not see action.

At the end of the war in 1763, the regiment was stationed in Hungary. 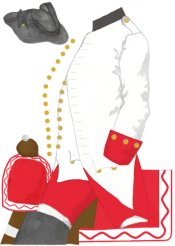 The Bautzener Bilderhandschrift of 1762 shows a gold lace on the tricorne, a red neckstock and straw breeches.

The small "flag" attached to the trumpet was probably yellow with a black “F” cipher (replaced by an “M” in 1761).

The standards of the cuirassiers were square shaped and made of brocade or damask. Each side of the standard was made from a separate piece. The painted flagpoles (brown for this regiment) were tournament lances.

Regimental Standard: red (pink with silver embroideries as per Schirmer)

Harald Skala for the revised history of the regiment