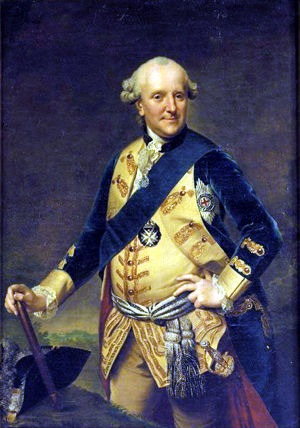 Painting of Ferdinand of Brunswick (with the order of the Garter) by Johann Georg Ziesenis in 1762 - Source: Wikimedia Commons

Ferdinand was the fourth son of Ferdinand Albert II, Duke of Brunswick. He was educated for a military career.

On June 29, 1740, his brother-in-law, King Frederick II, the Great appointed Ferdinand as chief of the new 39th Infantry Regiment raised in Brunswick for service in the Prussian Army.

On April 10, 1741, at the start of the War of the Austrian Succession, Ferdinand was present at the Battle of Mollwitz as an aide-de-camp to Frederick II.

On May 17, 1742, Ferdinand took part in the Battle of Chotusitz. When peace was signed with Austria, Ferdinand received the Order of the Black Eagle.

On December 17, 1744, in succession to Margrave Wilhelm of Brandenburg, killed at Prague, Ferdinand received the command of Frederick the Great's Leibgarde Battalion.

On June 4, 1745, during the Battle of Hohenfriedberg, Ferdinand led a brigade. On September 30, Ferdinand greatly distinguished himself at the head of his brigade during the Battle of Soor. He stormed a height defended by Ludwig, one of his younger brother, as an officer of the Austrian service and another brother of Duke Ferdinand was killed by his side in this charge. During this attack, he captured five guns. After the peace of Dresden, Duke Ferdinand paraded with King Frederick II in Berlin.

After the war, Ferdinand was in the closest touch with the military work of Frederick the Great who supervised the instruction of the guard battalion. Furthermore, Ferdinand became one of the most intimate friends of the king. During this period, he became successively lieutenant-general (May 19, 1750), Governor of Peitz (September 17, 1752), Governor of Magdeburg (June 7, 1755) and colonel of Braunschweig Infantry (June 7 1755).

In 1756, during the Prussian invasion of Saxony, the opening campaign of the Seven Years' War, Ferdinand led the rightmost of the three Prussian columns which converged upon Dresden. On September 13, he commanded the Prussian vanguard that chased the Saxon Army out of Nollendorf. During the blockade of Pirna in September and at the Battle of Lobositz, on October 1, he commanded the right wing of the Prussian infantry. Ferdinand then spent the winter of 1756-57 with Frederick II at Dresden where he took part in the preparation of the coming campaign.

On April 23, 1757, Ferdinand captured Aussig (present-day Ústí nad Labem). On May 6, he was present and distinguished himself at the Battle of Prague where he commanded a division. He also served in the campaign which led to the Battle of Rossbach on November 5. However, he was not engaged into this battle. In November, shortly after this battle, he was appointed to take over command of the Allied Army (about 50,000 men) from the Duke of Cumberland after the rejection of the Convention of Klosterzeven by George II of Great Britain. Ferdinand found the army demoralized by its defeat at Hastenbeck (July 26 1757) and by its capitulation at Klosterzeven. On November 9, he took command at Stade and, within six weeks, launched a counter-offensive in Hanover which surprised the French army within its winter-quarters.

His conduct during the five campaigns which he led in Western Germany was naturally influenced by the teachings of Frederick, whose pupil the duke had been for so many years. Ferdinand, indeed, approximated more closely to Frederick in his method of making war than any other general of the time. Yet his task was in many respects far more difficult than that of the king. Frederick was the absolute master of his own homogeneous army, Ferdinand merely the commander of a group of contingents (Prussians, Hanoverians, Hessians, Brunswickers, and men of Gotha and Schaumburg-Lippe), and answerable to several princes for the troops placed under his control.

By the end of March 1758, Ferdinand had conducted a winter offensive in western Germany and driven the French army across the Rhine. On March 25, he was promoted to general of infantry. On June 23, he fought Clermont's French army at the Battle of Krefeld, several marches on the French side of the Rhine. His army divided into three columns launched a coordinated attack against Clermont's position. Ferdinand won the day, the French loosing about 4,000 men. After their defeat, the French had to abandon plans to send reinforcements to Austria. In the following months, Ferdinand was unable to maintain his advanced position and had to fall back to the Lippe. His success induced the British Parliament to send a reinforcement of 8,000 British troops which joined him in August. On December 8, Frederick promoted Ferdinand to field marshal.

In March 1759, Ferdinand launched a spring offensive in western Germany but was defeated at the Battle of Bergen (near Frankfort-on-Main) on April 13. However, he won the Battle of Minden on August 1, forcing the French army to abandon most of the territories that it had conquered during the year. After his victory at Minden, King George II gave him the Order of the Garter, and the thanks of the British Parliament were voted on the same occasion to the "Victor of Minden".

On July 31, 1760, Ferdinand defeated a French army in the Battle of Warburg. However, he was gradually pushed back into Germany but managed to protect Frederick's flank.

In 1761, Ferdinand had to face two French armies totaling more than 100,000 men. He threatened their lines of communications forcing the two armies to merge. He then confronted these armies with his 60,000 men at the Battle of Vellinghausen on July 15 and 16 and defeated them.

In 1762, Ferdinand still faced two much larger French armies. He defeated one of these armies in the Battle of Wilhelmsthal on June 24.

Frederick, hard pressed in the eastern theater of war, owed much of his success in an almost hopeless task to the continued pressure exerted by Ferdinand in the west.

Early in 1763, after the Seven Years' War, Ferdinand visited Frederick at Potsdam. In June, they toured together the battlefields of Minden, Warburg and Vellinghausen. Later, Ferdinand resumed his function of Governor of Magdeburg.

In 1766, Frederick and Ferdinand relations became strained and the duke resigned from Prussian service. In November, Ferdinand became a field-marshal in the Austrian service and colonel of a Bohemian regiment.

In 1767, Ferdinand acquired the Castle of Vechelde. In the following years, Frederick and Ferdinand finally came to a reconciliation and the former payed repeated visits to Ferdinand at Vechelde in 1772, 1777, 1779 and 1782.

During the War of American Independence there was a suggestion, which came to nothing, of offering Ferdinand the command of the British forces.

Military History Encyclopedia on the Web