The regiment was formed on December 1, 1743 from troops originating from Dragoner-Regiment Nr. 1. It was initially commanded by Major-General von Möllendorf

In 1745, during the War of the Austrian Succession (1740-48), the regiment took part in the Battle of Kesselsdorf

In 1757, the regiment was part of Lehwaldt's Army assigned to the defence of East Prussia against a Russian invasion. On August 30, at the Battle of Gross-Jägersdorf, it was deployed in the second line of the cavalry left wing under Lieutenant-General Schorlemmer. During this battle, the regiment lost 5 men killed and 29 wounded. On November 27, the regiment was part of the detachment placed under the command of the Duke zu Holstein-Gottorp who advanced to Anklam and Demmin to face the Swedes.

In January 1758, the regiment was part of Lehwaldt's Army who proceeded to the invasion of Swedish Pomerania, bottling up the Swedes in Stralsund. On January 10, it was part of Holstein-Gottorp's Corps who advanced into Mecklenburg, levied considerable contributions and took possession of Wismar (January 27) and Rostock (February 6). About mid February, Holstein's Corps advanced into the Duchy of Lüneburg and finally made a junction with the Allied army of Ferdinand of Brunswick. On March 3 during the Allied winter offensive in West Germany, it engaged a French cavalry force in Lauenau near Hameln and put it to flight. During this action, it captured a standard, 10 officers and 168 men, losing only 9 men killed and 18 wounded. On May 26, the regiment was part of the corps of the Prince von Holstein encamped at Dülmen. On May 31, this corps accompanied Ferdinand of Brunswick in his offensive on the west bank of the Rhine. On June 12, during the aborted attack on the French positions at Rheinberg, the regiment was in the Holstein’s (third) column of attack under Major-General von Brandemer. On June 23, the regiment took part in the Battle of Krefeld where he was deployed on the right wing under the command of the Erbprinz (hereditary prince) of Brunswick. It attacked the French infantry from the rear and drove it out of its entrenchments after a fierce fight. It took the kettle drums of the French Royal-Cravate Cavalerie. On September 29, the regiment was part of the isolated Allied observation corps under the command of Prince Holstein which escaped the French unsuccessful night attack at Bork.

During the first half of 1759, the regiment formed part of the Allied army of Ferdinand of Brunswick. It was attached to Finckenstein’s Division in the second line of the cavalry right wing. On April 13, it took part in the Battle of Bergen where it formed part of the third column under the Duke von Holstein-Gottorp. On April 19, during the Allied retreat after the defeat of Bergen, 2 squadrons of the regiment along with 1 grenadier battalion were part of a detachment which was surrounded by the Chasseurs de Fischer near Alsfeld. The grenadiers managed to escape the trap but the 2 squadrons were captured along with their two standards and their kettle-drums. In June, the regiment (now counting only 4 sqns) was part of the main Allied army under the command of the Duke Ferdinand of Brunswick. On August 1, the regiment took part in the Battle of Minden where it was deployed in the second line of the 8th column under Lieutenant-General von Urff.

On Sunday August 3, 1760, when Frederick resolved to march towards Silesia, the regiment formed the rearguard of the third column. On August 15, the regiment was present at the Battle of Liegnitz. On September 17, it took part in the Combat of Hochgiersdorf where it was deployed in the second column under Lieutenant-General Count Wied.

At the end of June 1761, the regiment took part in a raid in Greater Poland to destroy Russian magazines. By August, it formed part of the army under the command of King Frederick II encamped in the entrenched camp of Bunzelwitz (present-day Bolesławice) near Schweidnitz in Lower Silesia. On August 15, the regiment distinguished itself in an engagement at the Wahlstatt Monastery. In September, it took part in a second raid in Greater Poland before being sent to the relief of Colberg. On September 15, it fought in the Engagement of Gostyn, capturing an entire battalion and two guns. On October 22, it took part in the Combat of Gollnow. On December 12, it fought in the Combat of Spie. At the end of December, the regiment formed part of the corps under the command of generals Schenckendorff and Platen which marched by Schwedt and Berlin and took up its winter-quarters in Saxony.

In 1762, the regiment returned to Silesia. On July 6, it was probably at the Combat of Adelsbach. On July 21, it fought in the Battle of Burkersdorf. It then covered the Siege of Schweidnitz. 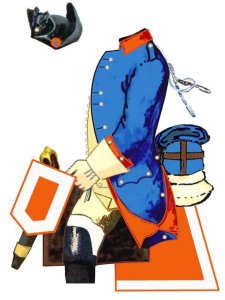 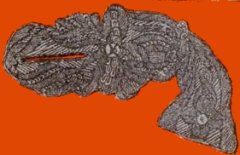 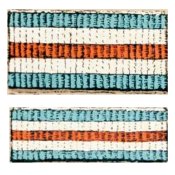 Drummers of the regiments wore the same uniform as the troopers but decorated on the seams with a white lace decorated with 2 outer blue bands and a central orange band.

Standards were made of damask. They were swallow-tailed and measured some 50 cm along the pole, 65 cm from the pole to the extremity of a point and 50 cm from the pole to the centre of the indentation. The cords and knots were of silver threads. The pole of the standard was an orange tournament lance reinforced with iron hinges. The golden spearhead wore the crowned monogram of Frédéric (FR).