The regiment was created on September 1, 1684 as “Flandre Infanterie”. Indeed, expecting a Coalition to soon form against France, Louis XIV raised 30 new regiments from September 1 to 30 for the defence of the various places of the realm. By raising one regiment a day, he avoided any problem of precedence among these new regiments. The regiment was formed with the Iverny company of Picardie Infanterie and garrison companies. It was given to N. Le Sens, Marquis de Folleville.

In 1719, during the War of the Quadruple Alliance, the regiment formed part of the Army of the Pyrenees.

In 1733, during the War of the Polish Succession (1733-35), the regiment joined the Army of Italy. In 1734, it took part in the Battle of Colorno, in the Battle of San Pietro where his colonel was killed, and in the Battle of Guastalla; and in 1735, in the capture of Revere, Reggio and Gonzague.

On March 15, 1749, the regiment incorporated the troopers of the disbanded Montcalm Infanterie. In 1753, it took part in the training camp of Gray.

During the Seven Years' War, the regiment ranked 70th and was under the command of:

When the French infantry was reorganised, on December 10, 1762, the regiment was disbanded and its troops incorporated in Touraine Infanterie.

In 1756, the regiment was sent to Corsica under the command of the Marquis de Castries to prevent a British invasion and to fight against the nationalist movement led by Paoli. It remained in this island until 1762. 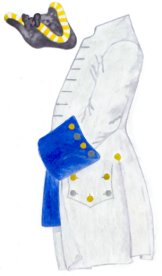