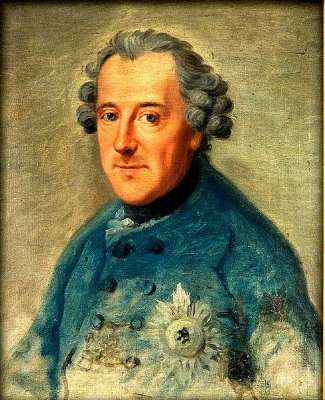 Frederick was the eldest son of Frederick William I, King of Prussia. Frederick was submitted to a very strict education mainly related to military and practical subjects. His father even explicitly excluded Latin from his program. Nonetheless, under the influence of his governess Madame de Roucoulle, and of his first tutor Duhan, a French refugee, Frederick acquired an excellent knowledge of French and a taste for literature and music. He even received secret lessons in Latin.

Both Frederick and his sister Wilhelmina became extremely dissatisfied with the dull and monotonous life they were compelled to lead. Meanwhile, Frederick William got very disappointed with his son's personality. Frederick William's dislike of his son, openly avowed, displayed itself in violent outbursts and public insults.

In 1730, Frederick finally decided to run away and to take refuge at the British court during a journey which he was about to make with the king to south Germany. Two of his friends helped him: Lieutenant Katte and Lieutenant Keith. However, through Katte's indiscretion, the secret was found out. Frederick was placed under arrest, deprived of his rank as crown prince, tried by court-martial, and imprisoned in the Fortress of Küstrin. Keith managed to escape but Katte was arrested, court-martialed and punished with two years imprisonment. A verdict that was changed to a death sentence by the king. On the morning of November 7, Katte was beheaded before Frederick's window. After a while, Frederick's chaplain was able to report favourably to the king about Frederick changed disposition. Frederick William commissioned the chaplain to receive from the prince an oath of filial obedience. His arrest was then lightened and, for the next 15 months, he worked from Küstrin on administrative tasks related to the departments of war, agriculture and government.

In 1732, as a sign of rehabilitation, Frederick was made colonel in command of a regiment at Neuruppin.

In 1733, Frederick married Princess Elizabeth Christina, daughter of the Duke of Brunswick-Bevern. He received the estate of Rheinsberg in the neighbourhood of Neuruppin where he lived until he succeeded to the throne. During this period, he accomplished his assigned duties so conscientiously that he ultimately gained the esteem of the king. Frederick took advantage of this period to indulge to the full his personal tastes, carrying on a lively correspondence with Voltaire and other French men of letters, studying philosophy, history and poetry. He even wrote two works: "Considérations sur l'état présent du corps politique de l'Europe" and "Anti-Macchiavel".

On May 31 1740, Frederick became King of Prussia. He maintained all the forms of government established by his father but tolerated every form of religious opinion and abolished the use of torture. He soon reduced the Große Grenadiers (Giant Grenadiers) to a single battalion but maintained a powerful and disciplined armed force. On October 10 1740, Emperor Charles VI died leaving the Habsburg inheritance to his daughter Maria Theresa. Immediately, Frederick began military preparations to recover Silesia which was disputed since decades between the Habsburg dynasty and his own House of Hohenzollern. In fact, the young king dreamed of acquiring reputation and of increasing the power of Prussia.

Frederick sent an ambassador to Vienna, offering, in the event of his rights in Silesia being conceded, to aid Maria Theresa against her enemies in the incoming War of the Austrian Succession. The archduchess of Austria rejected Frederick's offer and, soon after, Frederick invaded Silesia with an army of 30,000 men. On April 10 1741, Frederick fought his first battle at the head of the Prussian army at Mollwitz. At a certain point, thinking that the battle was lost, he fled the field. However, his wonderful army won the day. A second Prussian victory was gained at Chotusitz, near Czaslau, on May 17 1742, securing Silesia for Frederick. On June 11, peace was signed between Austria and Prussia at Breslau, confirming Frederick's possession of Silesia. Maria Theresa considered this measure as essential to concentrate her efforts against France and the Elector of Bavaria, now Charles VII.

Frederick made good use of the next two years, fortifying his new territory and repairing the devastation inflicted upon it by the war. In 1744, the Prince of East Frisia died without heirs, leaving his domain to Frederick.

In 1744, alarmed by the Austrian victories and fearing that Maria Theresa, once France defeated, would turn against him, Frederick entered into secret negotiations with France. He finally pledged to defend the imperial rights of Charles VII as well as his hereditary Bavarian lands. In August 1744, Frederick invaded Bohemia and captured Prague. However, he could not maintain his position and was soon forced to retire. In 1745, he won the battles of Hohenfriedberg, Soor and Hennersdorf while Leopold of Dessau at the head of another Prussian army won the victory of Kesselsdorf in Saxony. On December 25 1745, the peace of Dresden was signed between Austria and Prussia, conceding once more Silesia to Frederick.

After this war, Frederick governed as an absolute ruler, using his ministers as mere clerks to give effect to his will. He continued to focus on the maintenance of a large army, raising it to 160,000 men. Furthermore, fortresses and magazines were always kept in a state of readiness for war.

The enormous resources necessary to maintain such an army called for a very strict administration of his small estates. He judiciously chose capable collaborators. Frederick also restored the Academy of Sciences and promoted elementary education. On the economic scene, he promoted agriculture, established colonies and populating them with immigrants, extended the canal system, drained and diked the great marshes of the Oderbruch, turning them into rich pasturage, and encouraged the planting of fruit trees and of root crops. He also encouraged the creation of silk manufacture.

Frederick despised the German language and usually wrote and spoke French. He had some pretensions as an author and published some verses as well as better known woks such as "Mémoires pour servir à l'histoire de Brandebourg" and "L'art de la guerre". He maintained an important correspondence with French writers. In 1752 Voltaire, who had repeatedly visited him, came at Frederick's urgent supplication. The relationship between Frederick and Voltaire gradually deteriorated and Voltaire returned to France.

In these days, Frederick lived in a retired mansion named Sanssouci (not to be confused with the future palace). He rose early and spent most of the day on public affairs while finding time to review troops, do some literary work, attend concert and dine with friends. He visited the queen only on rare occasions. Frederick was very concerned by the proper administration of justice and, in 1747, a new code appeared: the Codex Fredericianus.

Even after the Peace of Dresden, Maria Theresa had never resigned herself to the loss of Silesia. Her intense diplomatic activities finally resulted in a spectacular reversal of alliances whereby France joined Austria, Russia and Saxony against Prussia. Sweden was also drawn into this alliance by French subsidies. Meanwhile, relations between Great Britain and Prussia had tightened and the Treaty of Westminster was signed in January 1756. The small principalities of Brunswick and Hesse-Cassel also supported Prussia. To prevent a concerted attack on Prussia, Frederick decided to seize the initiative. 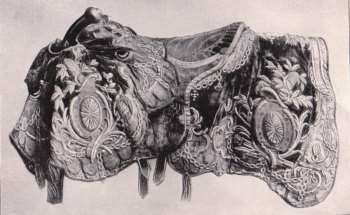 Accordingly, on August 24 1756, Frederick launched a preventive invasion of Saxony, the opening move of what would be known as the "Seven Years' War". The numerically inferior Saxon Army retired in the Pirna Country where the Prussian Army completely encircled it. An Austrian relief army was defeated in the Battle of Lobositz in October. The Saxon Army then had no choice but to surrender. Frederick incorporated entire regiments of the Saxon Army into his own.

In 1757, after defeating the Austrians in the Battle of Prague, Frederick was himself defeated by them in the Battle of Kolin. Meanwhile the French invasion of Hanover led to the Convention of Klosterseven by which the Allied Army surrendered, leaving Prussia isolated. However, Frederick reacted energetically leading his small army against a much larger Franco-Imperial Army and defeating it in the Battle of Rossbach. One month later he was back on the eastern theatre of operation where he defeated the Austrian in the Battle of Leuthen, expelling them from Silesia. Great Britain then rejected the Convention of Klosterseven and asked Frederick for a general to lead the Allied Army in Western Germany. Frederick sent them Ferdinand of Brunswick and within a few months the Allies launched a counter-offensive in Hanover, forcing the French to retire on the Rhine.

In 1759, the Allies won the Battle of Minden and reoccupied a large part of western Germany. However, on August 12, Frederick lost the Battle of Kunersdorf against an Austro-Russian army. After this disastrous battle, Frederick considered the situation as hopeless. Somehow, he managed to go through this difficult period and to resume the war.

In 1760, Frederick gained important victories in the Battle of Liegnitz and Battle of Torgau. However, he was now mainly confined to the defensive.

The death of the Russian Empress Elizabeth in 1762, ultimately saved Prussia from certain ruin. The new tsar. Peter III even became Frederick's ally. On October 29, the Prussian Army won its last victory of this war at the Battle of Freiberg. By the end of the year, all major European powers were sick of war.

On February 15 1763, a few days after the conclusion of the Peace of Paris between France, Great Britain and Spain, the Treaty of Hubertusburg was signed, Austria confirming Prussia in the possession of Silesia. Prussia was now universally recognized as one of the great powers of Europe, a rival of Austria.

After this terrible war, Frederick's priority was to rebuild the economy of Prussia which had been devastated by repeated invasions. Pomerania and Neumark were freed from taxation for two years, and Silesia for six months. Many nobles whose lands had been wasted received corn for seed. Across the country, horses belonging to the king were lent to farms. Houses were rebuilt at the state expense. The Bank of Berlin was founded... Frederick's reconstruction program soon brought back prosperity and coinage was gradually restored to its proper value.

In 1764, Prussia concluded a treaty of alliance with Empress Catherine II of Russia for eight years.

In 1769, Joseph II of Austria visited Frederick at Neisse in Silesia.

In 1770, Frederick returned his visit to Joseph II and met him in Moravia. During the same year, Prussia took part in the first partition of Poland, by which it annexed Polish Prussia, without Danzig and Thorn, and Greater Poland as far as the River Netze.

In 1777, Maximilian Joseph, Elector of Bavaria, died without children. Joseph II then took possession of the greater part of his domain. The elector palatine, the lawfully heir, came to an arrangement. However, his successor Charles, Duke of Zweibrücken, disagreed with the clauses and appealed to Frederick.

In July 1778, after fruitless negotiations about the Bavarian succession, a powerful Prussian army led by Frederick crossed the Bohemian frontier.

Finally, on May 13 1779, a treaty was signed at Teschen, avoiding a major conflict. By this treaty, Austria received the district of Burgau while Prussia took the Franconian principalities.

In 1785, under Frederick initiative, the Fürstenbund (league of princes) was formed for the defence of the imperial constitution, believed to be imperiled by Austrian policies.

By the end of his reign, Frederick had not only rebuild the Prussian economy but had also managed to amass the immense sum of 70 million thalers in the state treasury. He also left a well trained army numbering some 200,000 men.