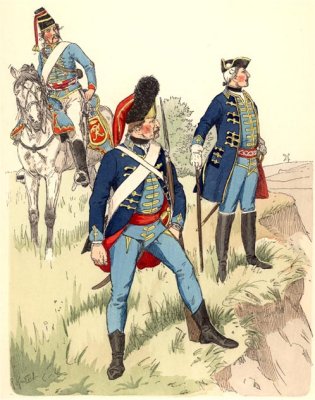 The Freikorps was raised in Breslau from Hungarian prisoners by Major von Schony on March 17 1761. It consisted of :

In June 1761, 2 companies initially raised in Breslau to join the ranks of the Pomeranian Frei-Grenadier-Corps von Hüllessem were amalgamated with the grenadiers of the Freikorps (but they retained their own uniforms), bringing the total strength of the grenadier battalion to:

For the campaign of 1762, an additional squadron of hussars was raised. By February 12, the corps consisted of:

In mid June 1762, the 4 companies of grenadiers were incorporated into the Pomeranian Frei-Grenadier-Corps von Hüllessem.

During the Seven Years' War, the commanders of the various corps were:

The entire Freikorps was disbanded in 1763 at the end of the Seven Years' War: the grenadiers were used to replace those of the Garrison Regiment III who had been taken prisoners during the war. The hussars for their part were incorporated into Silesian cavalry regiments.

For the campaign of 1761, the unit was attached to the army of Frederick II. Early in November, half a squadron of hussars (about 30 men) of the unit formed part of General von Schenckendorf's reinforcements sent from Breslau by Frederick to Platen who was trying to stop the Russian invasion in Pomerania. On November 9, Schenckendorf's corps joined Platen at Pyritz; it had marched by Glogau, Crossen an Oder (present day Krosno), Frankfurt an Oder, Cüstrin and Karsko. On November 17, the Prince Eugen of Württemberg also made a junction with Platen's forces at Greiffenberg. The hussars of Freikorps Schony were now attached to the leftmost column under command of Colonel Lossau. On November 29 and 30, the combined corps of Württemberg and Platen marched from Regenwalde (present day Resko) to Naugard (present-day Nowogard) where they waited for a convoy of supplies arriving from Stettin. On December 10 at 10:00 PM, a Prussian convoy of 1,000 wagons arrived at Treptow with supplies, forage and ammunition. On December 11, Württemberg marched from Treptow in 2 columns, escorting the convoy. On December 12, Schony Hussars took part in the combat of Spie where they were merged with Belling Hussars. In this combat, the Russians put a stop to the advance of the Prussian relief column, forcing the Prussians to retire. At the end of December, after a very tough campaign, the various Prussian corps operating in Eastern Pomerania took their winter quarters. The 25 hussars of Freikorps Schony followed General Thadden to Lusatia.

In 1762, the 3 squadrons of hussars served in the Army of the King while the 4 companies of grenadiers were incorporated into the Provincial-Frei-Grenadier-Corps von Hüllessem. On July 21, the Freikorps took part in the battle of Burkersdorf. 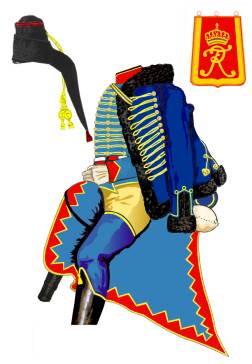 Troopers were probably armed with a short curved sabre, two pistols and a carbine.

Uniforms of the Grenadiers

Uniform in 1761 - Source: Richard Couture from a template by Jocelyne Chevanelle

Privates were probably armed with a short musket, a bayonet and a sabre with a curved blade.

Drummers wore a a uniform similar to the uniform of the troopers with the following distinctions: