The unit was created by a decree dated February 20, 1761. It consisted of a single mounted company of fusiliers-guides comprising:

The company was attached to the staff of the army where it served.

The company was disbanded by a royal decree dated November 20, 1762.

We assume that the uniform was similar to the uniform of the Fusiliers-Guides de Plinchamp. This seems to be corroborated by the partial description made by Sapin-Lignères. 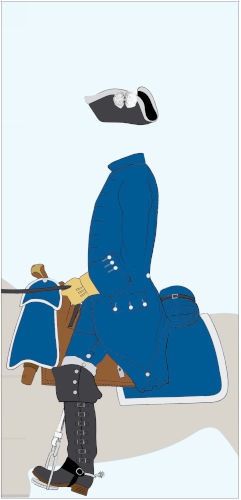 Armaments consisted of a musket and a dragoon style bayonet, a pistol, a sabre and a cartridge box (20 cartridges).

The housing colours are unknown. However, they were probably similar to those of the Fusiliers-Guides de Plinchamp: blue edged white.

There were no musicians attached to this company.

This company carried no colours.