In April 1759, after the appointment of the Duke Francesco III as governor of Milan by Maria Theresa, there were some 2,700 Modenese soldiers sent to the to assume garrison duties. The regiment (620 men) was stationed at Pavia. 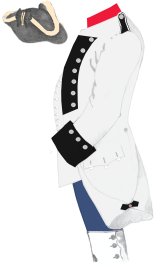