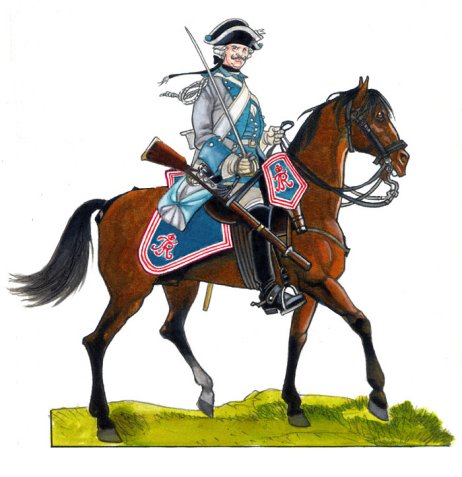 In 1756, during the invasion of Saxony by the Prussians, the regiment was stationed in Poland. It thus avoided the fate of the Saxon units captured at Pirna who were forcefully incorporated into the Prussian service.

In 1757, the regiment served with the Austrian army, a situation which persisted till the end of the war. On June 18, the regiment took part to the battle of Kolin. It was deployed in the first line of the extreme right wing in Morocz division. At the end of the afternoon, as the Wied's Austrian division was wavering in front of Hülsen and Tresckow attacks, the Saxon Chevaux-légers along with the Ligne Dragoons and the Kommandierten cavalry fell of the right flank on the exposed Prussian corps. They broke Hülsen's cavalry and thrown his infantry into confusion. Wied's infantry division rallied and the Austrian and Saxon cavalry attacked again. Hülsen's infantry was broken and formed squares. After a short fight, the Austrians captured 14 Prussian battalions along with all their guns, as well as 9 colours. On September 7, when general Nádasdy attacked Winterfeldt's corps isolated at Moys, the regiment was deployed in the second line of the right wing under major-general Gosenitz. In October and November, the regiment was present at the siege of Schweidnitz where it was deployed from the Stream of Weistrity (Bystrzyca) to Zülzendorf (Sulislawice). On November 22, the regiment took part to the battle of Breslau where it was deployed in the second line of the cavalry left wing of Nádasdy's Corps. On December 5 at the battle of Leuthen, the regiment was part of the cavalry vanguard detached at Borne under marshal Nostitz which was attacked and driven back on the Austrian right wing by the Prussian vanguard.

In early May 1758, during the Prussian invasion of Moravia, the regiment was part of the cavalry corps of De Ville which had taken position at Wolschan (present-day Olšany). On May 5, Frederick advanced against this corps, forcing it to retire beyond the defile of Predlitz.

In early June 1760, the regiment was attached to Lacy's Corps operating on the east bank of the Elbe. On September 17, the regiment was present at the combat of Hochgiersdorf. In October, part of this corps, including this regiment, conducted a raid on Berlin. In Charlottenburg, the regiment smashed the furniture and doors, cut the pictures, maltreated people and overset Polignac collection of antiques and classicalities. On November 3, it took part in the bloody battle of Torgau.

On October 29 1762, the regiment took part in the battle of Freiberg where it was deployed under Mayern on the extreme left wing of the Austrian Main Army. 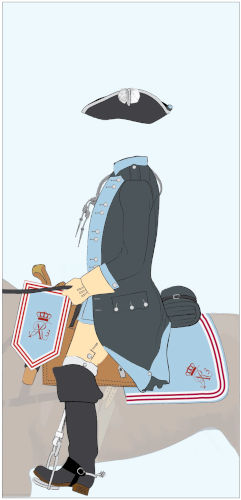 Kronoskaf - Project SYW, Various articles on the campaigns, sieges and battles of the war