A decree, dated September 15 1744, created a grenadier company within each French militia battalion. On April 10 1745, another decree ordered to detach all militia grenadier companies from their parent battalion and to group them in 11 regiments of Grenadiers Royaux. Each regiment consisted of a single battalion wearing its colonel's name. The 5th Regiment was placed under the command of colonel de Beauteville.

The 5th regiment now consisted of:

On February 4, 1760, the regiment contributed 358 men to the French artillery. 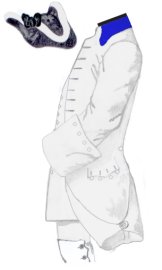