The tercio was created for the war against Portugal on 22 January 1657 and confided to the Maestre de Campo Don Gerónimo de Benavente y Quiñones. It consisted of 26 companies for a total of 156 officers and 790 soldiers recruited in Madrid; and was known by the name of its maestre de campo.

In 30 August 1664, during the reorganisation of the Army of Extremadura, the tercio became one of the six tercios provinciales and was designated as the “Tercio provincial de Burgos”. It was also known as the “Amarillos Viejos”.

In 1665, the tercio served with the Army of Portugal and took part in the siege of Villaviciosa and in the battle of Montesclaros. In 1666, it defended the frontier the Hispano-Portuguese frontier. In 1668, at the end of the war against Portugal, the tercio was reduced from 17 to 9 companies and garrisoned Pamplona, Fuenterrabia and San Sebastian.

In 1672, at the outbreak of the Franco-Dutch War (1672–78), the tercio was transferred to the Army of Catalonia. In 1674, the tercio took part in the siege of Bellegarde in Roussillon and in the battle of Maurellas. In 1678, it defended Puigcerdà and capitulated with the honours of war.

After the war, the tercio formed part of the garrison of Barcelona.

During the War of the Spanish Succession (1701–14), in 1702 , the tercio was transferred from Barcelona to the Province of Galicia. In 1703, it served on the frontier with Portugal. In 1704, it took part in the siege and capture of Castelo Branco; in the storming of entrenchments near Ferreira, in a combat near Castelo de Vide and in the blockade of Gibraltar; in 1705, in the unsuccessful siege of Gibraltar; in 1706, in the defence of Alcántara where it became prisoners of war., being exchanged later the same year. On 28 February 1707, the former “Tercio Provincial de Burgos Amarillos Viejos” was transformed into a regiment and took the name of “Regimiento de Guadalajara”. The same year, it took part in the Battle of Almansa, in the recapture of Requena and in the siege of Játiva. It then fought insurgents in Aragon and participated in in the siege and capture of Mequinenza., in the siege of Lérida. And in the recapture of Morella. In 1708, it was at the capture of Mora on the Ebro, at an engagement at Marvete and in the siege and capture of Tortosa. By 9 July 1709, a second battalion had been added to the regiment and the two battalions marched to Catalonia where they part in actions at Balaguer and against the Lines of the Segre. In 1710, the regiment (to the exception of its grenadiers) operated in Catalonia and Aragon and took part in the disastrous Battle of Saragossa., in the combat of Brihuega and in the decisive victory of Villaviciosa. The same year, its grenadiers took part in the defence of the coasts of the Province of Valencia. In 1711, the regiment took part in an engagement on the Point of Algerri; in 1713, in the blockade of Barcelona; and in 1714, in the siege and capture of Barcelona.

In 1717, the regiment was cantoned in Catalonia.

In 1718, at the outbreak of the War of the Quadruple Alliance (1718–1720), the regiment took part in the expedition in Sicily, in the capture of Palermo, Castellammare and Messina, and in the victorious battle of Milazzo. In 1719, it fought in the battle of Francavilla and took part in the defence of Messina where it capitulated with the honours of war. In 1720, the Spanish army evacuated Sicily and returned to Barcelona.

In 1727, the regiment took part in the unsuccessful siege of Gibraltar.

In 1740, at the outbreak of the War of the Austrian Succession (1740–1748),the regiment was sent to Majorca. In 1741, it returned to Barcelona. In 1742, it embarked at Barcelona with the army of the Duke de Montemar and landed at Genoa. In 1743, it took part in the indecisive battle of Campo Santo; in 1744, in the defence of the entrenched camp of Velletri; in 1745, in the siege of Tortona and in the battle of Bassignano; in 1746, in the capture of Milan and in the battle of Piacenza, befire retiring to the County of Nice. It was then transported to the Kingdom of Naples.

In 1749, after the war, the regiment sailed back to Barcelona. In 1752, it was sent to the Province of Extremadura to guard the frontier with Portugal. It then garrisoned Badajoz.

In 1757, the regiment was transferred from Extremadura to the Province of Navarre where it garrisoned Pamplona. 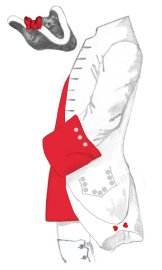 The coronela (colonel flag) of the regiment was white with a red Burgundian cross terminated in each corner by a golden crown. In the middle: the arms of Charles III surrounded by the necklace of the order of the Toison de Oro (Golden Fleece).

The batallonas (ordonnance flags) of the regiment were white with a red Burgundian cross terminated in each corner by a golden crown.