On the eve of the War of the Austrian Succession, in 1740, the duke Francesco III of Modena could field only his bodyguards (Guardia del Corpo) of 200 men and one infantry regiment: Palude Infantry. This infantry regiment was created with the remains of Villeneuve Infantry and Perini Infantry (800 men each), who had fought with the Imperial Army against the Turks in 1739 at the battle of Grocka and the defence of Belgrade). By May 7 1742, Palude Infantry counted 1,240 officers and privates.

In 1750, Palude Infantry was renamed Guardie a piedi (Foot Guards).

In 1755, the Modenese Army was reorganised. Infantry regiment then consisted of 1 battalion of 4 companies, each of 120 men. The companies were respectively commanded by the colonel, lieutenant-colonel, major and captain). Each regiment also comprised a grenadier company of 52 men. Thus, a regiment amounted to 528 privates, 18 drummers and pipers, 36 corporals, 18 sergeants and 20 officers for a grand total of 620 men. Exceptionally, the Guardie a piedi counted 2 such battalions.

In April 1759, after the appointment of the Duke Francesco III as governor of Milan by Maria Theresa, there were some 2,700 Modenese soldiers in the territory of Milan assuming garrison duties. The 2 battalions of the regiment were among this force, garrisoning Lodi and Pizzighettone. 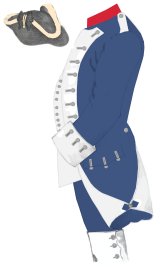