During the War of the Polish Succession, the regiment served on the Rhine from 1731 to 1735.

In 1756, the regiment counted 2 squadrons and was also known as “Beuvron”.

When the French Cavalry was reorganised on December 1 1761, the regiment was amalgamated with Rochefoucauld-Langeac Cavalerie to form the new Royal-Champagne regiment.

In 1757, the regiment took part in the invasion of Hanover. On July 26, it fought in the Battle of Hastenbeck where it was among the Royal-Pologne brigade in the second line of cavalry of the left wing. It was ordered to support the Grenadiers de France who had advanced into the village of Hastenbeck. After the victory, it encamped at Grosselsen near Hameln with the main body of the Army of the Lower Rhine from July 31 to August 2. After the Convention of Kloster-Zeven, it followed the main body, led by the Maréchal de Richelieu, who encamped at Halberstadt in Prussian territory from September 28 to November 5. The regiment was placed on the first line of the right wing. At the end of the year, it took its winter-quarters in Soest in Westphalia, in the fourth line of the French army.

By May 23 1760, the regiment was part of the second line of Broglie's Army, placed under the command of the Prince de Croy. On October 4, M. de Maupéou's Corps (including this regiment) left for the Lower Rhine. On October 13, the unit arrived at Neuss with Castries. On October 17, after having been left behind during Castries' advance from Neuss to Clostercamp, the regiment finally made a junction with Castrie's main corps. 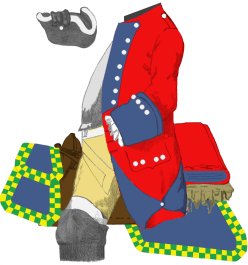