The regiment was raised on February 5, 1675 from some Compagnies Franches and Compagnies Liégeoises. In 1728, the regiment became the property of the powerful House of Harcourt.

In 1756, at the outbreak of the war, the regiment was stationed at Le Havre.

In 1757, the regiment was stationed at Lille. It left this city for Stockheim to join the French army operating in Germany. On his arrival, it was brigaded with Du Roy Dragons. It distinguished itself at the Battle of Hastenbeck, and at Münden, Hanover and Klosterseven. It finally took up its winter-quarters in the first line in the area of Bremen.

At the beginning of 1758, the regiment distinguished itself at Celle (Zell). In February, when Ferdinand of Brunswick launched his winter offensive in Western Germany, the regiment retired on the Rhine with the rest of the French army. From March 30 to April 4, it was on the left wing of the army of the Comte de Clermont in the camp of Wesel on the Lower Rhine. In April, when Clermont redeployed his army along the Rhine, the regiment was placed in the third line at Wassenberg, south of Brüggen. After the successful crossing of the Rhine by Ferdinand's army on May 31, the regiment retired towards Rheinberg where it joined Clermont's Army on June 2. It remained in this camp, where it was placed on the flanks behind the left wing, until June 12.

In 1759, the regiment returned to France where it was stationed on the coasts of Normandy.

In 1760, the regiment returned to Germany. At the beginning of August, it is reported in the area of Wibbecke.

At the beginning of June 1761, the regiment was part of the Army of the Lower Rhine under the command of the Prince de Soubise. On July 16, the regiment was present at the Battle of Vellinghausen. On September 2, it was part of Vogüé’s Corps, which moved closer to Wesel, thus threatening Dorsten. By November, the regiment had been allocated to Apchon's detachment, which was posted in the district of Meurs, Ürdingen, Linn, Krefeld and Rheinberg.

For the campaign of 1762 in Western Germany, the regiment formed part of the Army of the Lower Rhine. In mid-April, the regiment was part of d’Apchon’s detachment, which marched on Dortmund. By May 29, the regiment was posted at Orsoy. On August 25, the regiment was present at the Engagement of Grüningen. On August 30, it took part in the Combat of Nauheim, where it formed part of the vanguard under Lieutenant-General de Lévis. On November 20, when Louis XV issued his instructions regarding the French armies serving in Germany, specifying which units should return to France right away and which should stay in Germany till the final evacuation, the present regiment were among those which would remain on the Lower Rhine.

In December 1762, a regulation introduced a brand new green uniform with black as the distinctive colour.

Until 1758, drummers and oboists wore the livery of the House of Harcourt: red field ornamented with a braid consisting of 2 rows of alternating crimson and yellow squares arranged in a checker pattern.

From 1758, the musicians probably wore the livery of the House of Flammarens which is unfortunately unknown.

This regiment was the only French dragoon regiment with kettle-drums. This privilege dated back to the 17th century, when it had captured two pairs of kettle-drums. 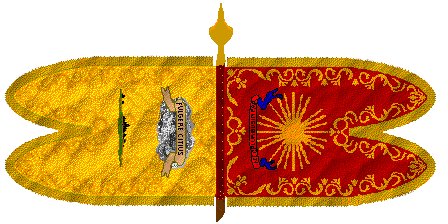 These guidons originating from the House of Harcourt were kept by their successors: the chevalier de Flammarens and the comte de Coigny.

This article is mostly a translation Jean-Louis Vial's article “Harcourt Dragons” published on his website Nec Pluribus Impar. The article also incorporates texts from the following books, which are now in the public domain: