The family originated from the frontier area between Austria and Bohemia. The first known member of this family was Bohomik who lived in Upper-Austria at the beginning of the XIVth century. The family later split into multiple lines and acquired additional estates in Bohemia and Austria. In 1524, Leonard Harrach bought the estate of Rohrau. In 1550, he was elevated to the title of baron in Austria; and in 1552 to the same title in the Empire. In 1627, the family was elevated to the title of count of the Empire.

In the XVIIth century, several members of the family could be found among the ecclesiastical dignitaries, diplomats and military. In addition to the County of Rohrau, the family also owned Thannhausen, Prugg and Pürrhenstein in Bohemia; as well as Starkenbach (present-day Jilemnice/CZ), Sadová, Strkov, in Moravia; and Gross Meseritz (present-day Velké Meziřičí/CZ) and Janovitz (present-day Janovice/CZ). Xavier Harrach also acquired by marriage the estates of Bystré/CZ and Kunewald (present-day Kunin in Moravia) with their castles. 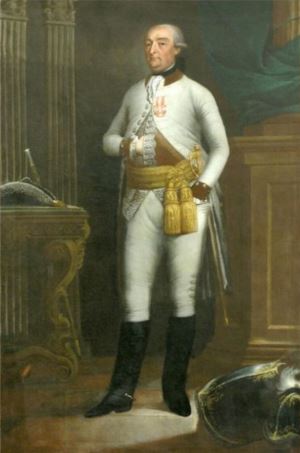 Franz Xaver Count Harrach was born on October 2 1732 aboard a ship on the Rhine near Kaub in the Palatinate. His mother was travelling to join his father in the Netherlands when she gave birth to healthy twins: Franz Xaver and Ignaz (the latter died on March 11 1753 in Vienna). Franz Xaver was later jokingly nicknamed "Rheingraf" by his friends.

Franz Xaver's father was Friedrich August Gervas Count Harrach (born June 18 1696 in Vienna, deceased April 6 1749 in Vienna), since 1732 High Steward and Lord Chamberlain of Archduchess Maria Elizabeth, governor of the Austrian Netherlands. He was also Supreme Chancellor of Bohemia and Knight of the Golden Fleece. His mother was Maria Eleonora Fürstin von Liechtenstein (born December 31 , deceased on July 18 1757 in Vienna) who had married Friedrich August Gervas Count Harrach on February 5 1719 in Vienna. They had 16 children, most of them deceased at an early age.

Franz Xaver spent his youth in his parents' house in the Austrian Netherlands. The places where he studied are not known. He must have joined the Austrian Army in his early youth because, by 1752, he was already a captain in Leopold Daun Infantry.

At the outbreak of the Seven Years' War, Franz Xaver was transferred to Puebla Infantry where he was promoted to lieutenant-colonel.

On October 14 1758, Franz Xaver fought in the Battle of Hochkirch where his regiment was deployed in the centre under FML Colloredo.

In 1759, Franz Xaver was promoted to colonel-commander of Puebla Infantry (the Albertina as well as other sources mention this promotion only in 1762). As per other sources, he was promoted major-general on October 5 1759 (C. von Wurzbach gives 1771 for this latter promotion).

On November 3 1760, Franz Xaver accomplished his most courageous deed in the Battle of Torgau. He stood with his regiment in the first line, in FML von Angern's Brigade. As his regiment was advancing to occupy a height, some Prussian infantry was doing the same. Franz Xaver let the Prussian approach within 50 paces before ordering his regiment to fire. The Prussians retired. Shortly thereafter, the Prussian launched another assault, supported by Markgraf Friedrich von Brandenburg Cuirassiers and Spaen Cuirassiers and led by the Prince of Holstein. During the ensuing combat, Franz Xaver lost his horse. He nevertheless continued to lead his troops till he was dangerously wounded and carried from the battlefield. In this hotly contested battle, his regiment lost 900 killed or wounded.

After the heavy losses suffered at Torgau, Franz Xaver's regiment was not involved in any major action till the end of the war.

On January 4 1761, Franz Xaver Count Harrach married Maria Rebecca Countess von Hohenems. She was the last Countess von Hohenems, daughter of Franz Wilhelm (III.) Count Hohenems (major-general and commander of Graz) and brought as dowry the castles and surrounding estates of Kunewald (present-day Kunin/CZ) and Bistrau (present-day Bystré/CZ). On December 22, for his behaviour at Torgau, Franz Xaver received the Knight Cross of the Maria Theresa Order in the sixth promotion of this military order.

On April 26 1773, Franz Xaver was promoted to Feldmarshall Lieutenant (FML).

In 1774, after the death of FM Neipperg, Franz Xaver became proprietor of the former Neipperg Infantry.

In 1779, Franz Xaver was appointed Commander-General of Lombardy.

Franz Xaver Count Harrach died in Milan on February 15 1781 at the age of 49. He was buried in Milan.

From his marriage with Maria Rebecca Countess von Hohenems, Franz Xaver had a unique daughter: Marie Walburga (born October 22 1762 in Brünn, deceased May 25 1828 in Kunin/CZ) who married Imperial Count Clemens Alois Truchseß von Waldburg-Zeil in Enzensdorf near Vienna on September 12 1779.

Various document from the Castle of Kunin in the Czech Republic