Guns were first used in the field by Hessian forces in 1421, centres of artillery technology being in Kassel and Marburg.

In 1518 Landgraf Philipp der Grossmuetige (the Generous) founded a corps of gunners within the County. By 1533 the small army took the field with a total of 60 pieces, including light guns, called Feldschlangen (snakes) and Falkonetts (Falconets) and heavier pieces called Kartaunen (Cannon-Royal).

In 1567, at the time of the partition of Hessen into Hessen-Kassel and Hessen-Darmstadt, Kassel retained 52 light guns and 25 heavier pieces. At this point, the arsenal was founded in Kassel.

By 1729 the cannon in the field artillery included 2-pounders, 4-pounders, 6-, 12- and 30-pounders. Howitzers were 16-pounders and there were several calibres of mortars.

In 1741 the artillery corps received its first Chef (Colonel-in-Chief), Oberst Dietrich Diede zu Fuerstenstein. Field gun calibres were standardised and the foundry of the arsenal in Kassel began to design and cast gun barrels with the emphasis on improved lightness, to aid mobility in the field. These guns were equipped with a screw mechanism to adjust the angle of the barrel and thus the range.

The following section gives the service characteristics of the various guns used by the Hessians in the war. Up till 1759, Hesse-Kassel fielded battalion guns only for the 12 infantry regiments with the Allied army. There is fragmental record of some few 6-pdr with the army in 1758. By 1760, the landgrave of Hesse fielded 4 mortars and 4 12-pdr cannon. All other heavy guns served by Hessian gunners had been the property of George II/III or the count regent of Bückeburg. For technical data of the guns, please see our article on the Hanoverian Artillery Equipment.

Each piece carried up to 40 rounds in the limber, with a further 100 rounds on one or two ammunition carts or wagons in the artillery park, which also carried the cartridges for the infantry small arms. The artillery and park required at least 225 horses. For details of the exact composition of the train vehicles, please refer to our article on the Hanoverian Artillery Train. 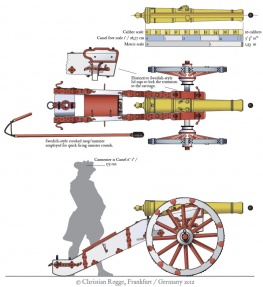 The accompanying scale drawings are Christian Rogge's tentative reconstruction based on the material provided, for most part by the (Kassel) Wilhelmshöher ‘Kriegskarten’ (‘war maps’) available from the Hessisches Staatsarchiv Marburg, Germany (DigAM) at [1]. They are based on the M1770 piece found there. This reconstruction is based on the assumption that earlier pieces fielded from 1741 were of similar design, the M1770 pieces including only minor modifications.

Basic scale for the proportions of the barrel was the calibre (i.e. the bore diameter), rather then the shot.

For aiming the piece, a machinery based on an elevating screw had been introduced in 1742. It's looks are unknown, therefore this machinery is only indicated, rather then illustrated in detail.

Dimensions of the 3 - pdr “Regiments Canon”

The cannon fired either solid shot or canister and by this time the projectile and the propellant charge were carried and loaded as a single unit. Howitzers fired explosive shells, with fuses capable of being shortened according to the tactical requirements.

As with the artillery of other nations at this time, the bronze barrels were ornately decorated.

Most reference on this subject assume Hessian gun carriages to be painted blue with metal fittings painted black. That said, it should be noted that they all rely on post 7YW and napoleonic period reference, as there is little found on the 7YW period. However, a 1754 painting by Tischbein showing the princes of the House of Hesse (the 4 sons of Frederic II) does indeed show a mortar in the right hand foreground and some cannon in the background. Other military items with this painting, such as a pair of cavalry standards and kettle drums are believed to be authentic and attributed to the Prince William regiment of horse (K 1). The mortar, possibly the 60-pdr piece fielded, and the cannon are all painted white or light grey and the metal fittings are painted red. As white-red are the 2 principle colours of the Hesse arms we may well assume Hessian guns to be all painted this way during the 7YW.