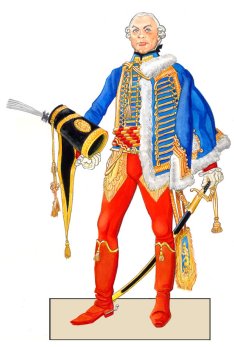 The unit was originally raised in 1702 by Major Bamfy.

During the War of the Spanish Succession, the troop quickly grew to a large unit supporting the British operations. At the end of the war, the unit was dispersed into the Prinz Friedrich Dragoons and the Spiegelschen Reiter Regiment.

During the War of the Austrian Succession, in 1744, the unit was raised again as the Husaren Corps. The unit was created around a group of Austrian horsemen and the dress of the Hessian Husaren Corps was modeled along Hungarian lines. It was sent to England. In 1746, it was transferred to Scotland where it disembarked at Perth. The Hessians refused to engage the Jacobite at Killiecrankie Pass and the latter were forced to retire because they had insufficient troops to attack the Hessian contingent in the open.

In 1757, at the beginning of the Seven Years' War, the squadron was augmented to 114 horsemen. The unit was later increased to regimental strength, now counting 2 squadrons.

In January 1760, at the death of Wilhelm VIII, the new Landgrave Friedrich II changed the organization of the army. After the “New Augmentation” or - in German - the Neue Augmentation, the peak of a regiment of four squadrons, each of 120 men, was reached. A regimental staff was created only in April 1762.

After the Seven Years War, the unit saw no action until the French Revolutionary War.

The regiment was disbanded on October 15, 1935 and used for the formation of the "Kradschützen-Bataillone" 1, 2 und 3. 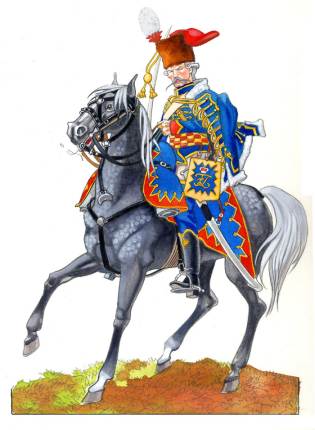 Trooper of the Hessen-Kassel Hussars in 1760 - Copyright: Franco Saudelli and Dr Marco Pagan

During the Seven Years War, the regiment operated in conjunction with the Hessian Jägers. This meant they saw a lot of skirmish action but did not participate in the large set piece battles. This was typical of the hussar duty.

On July 23 1758, the regiment took part in the Combat of Sandershausen where it was placed in the second line of the left wing.

On April 1 1759, during the Prussian incursion into Thuringia, Colonel Stockhausen with some Hessian hussars and light troops attacked the Prinz Savoyen Dragoons, capturing 2 of their standards. By June, the regiment was part of Imhoff's Corps operating in Hesse.

By May 21 1760, the regiment, then belonging to Spörcken's Corps, had taken position at Dortmund. On June 14, Colonel Bülow at the head of the Hesse-Kassel Hussars and part of the Légion Britannique attacked the Chasseurs de Fischer between Emscher and the Ruhr, driving them out of their positions and capturing 50 men.

From 1744, when this troop of light cavalry (the sole in the Hessen-Cassel Army) was raised, since to 1763, when the unit was reduced again to a squadron, several changes in organization were made. The continuous modification in strength for sure affected the dress and equipment.

We have no clear information about the first uniforms of this unit.

In 1762, probably for the first time, the uniform of the Corps was regulated.

The Mondirung-Reglement für 1761 was, however, quite schematic and even if the general uniform was prescribed no minute details were given. Our information is completed by the existence of an officer’s portrait in Eisenbach Castle. The portrait, dated circa 1760, shows the Rittmeister (Captain) von Riedesel wearing his best off-duty garments. The distinctive red color of the unit appears on the cuffs of the blue dolman. The pelisse hanging from the left shoulder was also blue and grey/white furred. Cordons and laces were golden. The typical hussar's sash around the waist was red with white elements. The Rittmeister sports expensive red tissue breeches embroidered in gold. When on duty Officers wore cheaper riding breeches made of leather like the troopers.

The unit’s headgear was a tall black felt mirliton with the black flame normally rounded around the hat body. This was golden edged for officers (black for troopers) and sported a small crest with the Hessian lion or ciphers on the front. The light cavalry sabre hanging on the left side had a black leather scabbard with golden tips and fitting. The sabretache of the officers had blue field, was edged in gold and had in the middle the Hessian rampaging lion with reared head resting on a triumph on his right.

Troopers had a simpler blue field sabretache, edged in yellow lace. In the center there was an embroidered Landgrave’s FL cipher under a crown on red field. 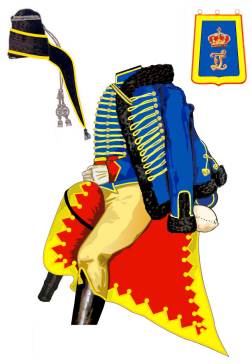 Individual information about the Hessian musicians has not been found. That said, given the very Prussian style, it can be assumed that the musicians would have followed the Prussian pattern.

Trumpeters would have worn the same uniform as any troopers. They usually rode grey or white horses.

The unit received no standards.