This Irish regiment was initially under French pay and entered into the Spanish service at Saragossa on November 1 1709 as the "Marqués de Castelbar" regiment. It consisted of Irishmen exiled during the Nine Years' War (1688–97) and from Irish or British prisoners captured during the previous campaigns of the ongoing War of the Spanish Succession. The regiment, counting two battalions, assembled in the towns of Cariñena and Longares in Aragon. Each battalion counted 13 companies of 50 men each.

During the War of the Spanish Succession, in May 1710, the regiment was allocated to the Army of Catalonia. It took part in the unsuccessful attack on the entrenched lines of the Allies at Balaguer. On July 27, it fought in the Battle of Almenar. On August 20, it took part in the Battle of Saragossa. After the defeat, it retired to Old Castile. On December 8, it fought in the Combat of Brihuega; and on 10 December, in the Combat of Villaviciosa. It then took part in the pursuit of the Allies up to the Cinca, capturing the garrison of Arcos. It took up its winter-quarters in Aragon. In 1711, the regiment fought against the insurgents in Aragon, taking part in the siege of Benasque. It was then transferred to Catalonia to attack the Allies in their entrenched camp of Calaf. On December 25, it returned to Aragon and took up its winter-quarters at Teruel. In 1712, it fought against the insurgents on the border of Catalonia, taking part in the siege and capture of Morella. In 1713, it continued to fight against the insurgents in Aragon and Valencia. It also escorted convoys of arms and ammunition coming from Castile and destined to Catalonia for the blockade of Barcelona. In 1714, the regiment was ordered to leave Aragon and to join the army blockading Barcelona. On September 11, the regiment was part of the reserve when the army stormed Barcelona.

In 1715, the regiment was allocated to the Corps of Observation stationed in Catalonia. In 1716, the second battalion was disbanded to be re-established in December 1717. The regiment then marched to Barcelona.

In 1727 and 1728, the two battalions of the regiment took part in the unsuccessful siege of Gibraltar.

In 1732, the regiment embarked at Alicante for the relief Mazalquivir (present-day Mers El Kébir) on the Coast of North Africa. It also took part in the capture of Oran. It returned to Alicante at the end of the year.

In 1734, the disbanded “Regimiento de Waterford” was incorporated into the present regiment.

In 1739, the regiment was attached to the corps stationed in Catalonia. In 1740, it was cantoned in Cartagena.

In January 1741, at the outbreak of the War of the Austrian Succession, the regiment embarked for Tuscany. In 1742, it was cantoned in Spoleto but later transferred to the district of Bologna. In 1743, it fought in the indecisive Battle of Campo Santo. In 1744, it took part in the defence of Naples; in 1745, in the siege and capture of Tortona. In 1747, the regiment embarked from Italy for the Balearic Islands. In 1748, it returned to Barcelona and marched to Badajoz where it assumed garrison duty.

In 1751, the regiment was transferred from Badajoz to Avila de los Caballeros. In 1752, the two battalions were posted on the coast of Galicia at Ares and Puente-Deume. In 1753, the entire regiment formed part of the garrison of La Coruña.

The Irish Brigade was disbanded in 1817 and the three battalions of the regiment were respectively incorporated into the regiments of Zamora, Mallorca and Jaen.

In 1756, the regiment was transferred to the district of Basco-Navarra. In March, it was attached to the garrison of San Sebastian.

On May 9 1757, the regiment set off from San Sebastian and marched towards Saragossa where it formed part of the garrison, sending detachments at Huesca and Cinco-Villas. On 18 December, it was transferred to the garrison of Jaca.

On September 2 1759, the regiment set off from Jaca and marched to the district of Catalonia where it garrisoned Lérida.

On April 11 1760, the regiment was transferred from Lérida to Balaguer.

In 1761, the regiment returned to Aragon where it garrisoned Saragossa.

On January 9 1762, the regiment set off from Saragossa for Galicia where it joined an army assembling for the planned invasion of Portugal. It was cantoned in Graña and Ferrol. On May 9, it made itself master of Miranda. On July 18, the first battalion occupied Chaves while the second cantoned in Monterey.

In 1763, the regiment marched to Old Castile. On April 3, it cantoned at Rioseco. 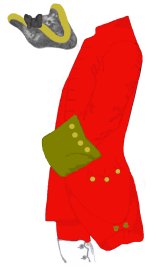 Coronela: White field with a red Burgundian cross; in the upper left corner, a medaillon carrying the arms of the regiment (blue field with a golden harp) surmounted by a golden crown; beneath the medaillon, a scroll with the motto "IN OMNEN TERRAM EXHIVIT SONUS EORUM".

N.B.: the field of the arms is often represented as blue which could simply be a faded green

Volker Scholz for the information provided on colours.