in the Russian service: Field-Marshal (1762) 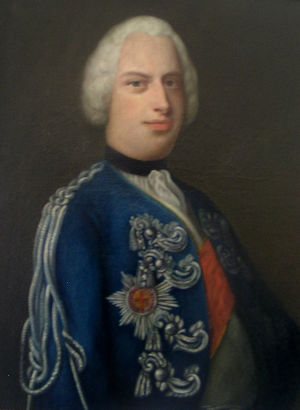 In 1726, Georg Ludwig’s father died and he was raised by his mother.

In the 1730s, Georg Ludwig entered in the Saxon service and joined the Garde du Corps.

In 1741, during the the War of the Austrian Succession, Georg Ludwig entered in the Prussian service. On May 20, 1742, he was appointed lieutenant-colonel in the Rochow Cuirassiers. On October 27, 1743, Georg Ludwig became proprietor of the former Platen Dragoons who were renamed Holstein-Gottorp Dragoons. In 1744, he was promoted to major-general. On December 15 of the same year, he took part in the Battle of Kesselsdorf at the head of his regiment. In 1745, he received the Order of St. Andrew from Empress Elizabeth Petrovna of Russia.

In 1756, at the outbreak of the Seven Years’ War, Georg Ludwig initially served under Field-Marshal Lehwaldt on the East Prussian theatre of operation.

In February 1757, Georg Ludwig zu Holstein-Gottorp was promoted to lieutenant-general. At the beginning of March, he assembled a corps at Angerburg (present-day Węgorzewo/PL) to follow any Russian corps who would advance leftwards through Poland. On August 7, Lehwaldt sent Holstein-Gottorp with 5 squadrons to reinforce Platen at Insterburg. On August 30, Holstein-Gottorp took part in the Gross-Jägersdorf where he commanded the cavalry of the right wing. In the night of 29 to 30 September, during the retreat of the Russian army, Holstein-Gottorp was sent forward with 5 battalions to take possession of Tilsit. He occupied the town and established batteries on the left bank of the Memel. At the end of November, Georg Ludwig von Holstein-Gottorp was detached with the vanguard of Lehwaldt’s Army took position along the Peene River between Anklam and Demmin in Pomerania, ready to launch an offensive against the Swedes. He soon reached Stettin. At the end of December, he advanced on Dargun. He then threw a bridge on the Trebel and crossed from Beestland with his cavalry.

In 1758, Georg Ludwig zu Holstein-Gottorp was admitted in the Military Order of the Black Eagle. In February of the same year, at the head of 15 Prussian squadrons, he joined the Allied army of Ferdinand of Brunswick on the left bank of the Elbe and took part in the Allied winter offensive in Western Germany. From June to August, Holstein-Gottorp then participated in the campaign on the west bank of the Rhine. On June 23, he fought in the Battle of Krefeld where he led the cavalry of the right wing.

From January to April 1759, Lieutenant-General Holstein-Gottorp took part in the Allied spring offensive in Western Germany. On April 13, he was at the Battle of Bergen where he commanded the third column of the Allies. This column was delayed and arrived too late to take an active part in the battle. On August 1, he fought in the Battle of Minden where he led a cavalry column. From August to December, Lieutenant-General Holstein-Gottorp then participated in the Allied counter-offensive in Western Germany.

In 1760, Georg Ludwig rejoined the army of Frederick II in Saxony, taking part in the battles of Liegnitz (August 15), Hochgiersdorf (September 17) and Torgau (November 3). In the latter battle, his corps was delayed and Frederick reproached him for having been too slow. On December 8, Frederick asked him to resign from his functions in the Prussian army.

On February 21, 1762, Georg Ludwig was appointed field-marshal in the Russian Army by Emperor Peter III. After the fall of the emperor, on June 4, Georg Ludwig was imprisoned. On June 21, he was freed and returned to his estates of Holstein-Gottorp.

Georg Ludwig, Duke zu Holstein-Gottorp died in Kiel on September 7, 1765 at the age of 45.

The section on Holstein's career between 1756 and 1762 is mostly derived from our articles depicting the various campaigns, battles and sieges.