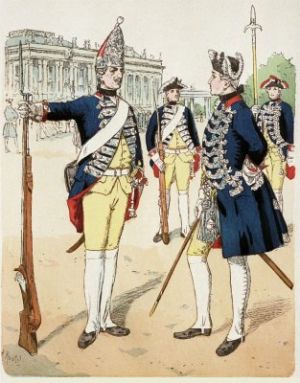 The regiment was created, on August 1 1688, by Major-General Carl Philipp Baron von Wylich zu Lottum in Wesel. A large part of its soldiers were French Huguenots (protestant) who had left France after the revocation of the Edict of Nantes in 1685.

The regiment was initially stationed in Wesel.

During the War of the Spanish Succession, the regiment saw action at the capture of Rheinberg and Geldern. It also took part in the battles of Blenheim (August 13, 1704), Oudenarde (July 11, 1708) and Malplaquet (September 11, 1709).

At the beginning of the War of the Polish Succession, the regiment was transferred to Ruppin and Nauen and, on February 29 1732, the Kronprinz (future Frederick II) obtained its colonelcy. The regiment was then known as Kronprinz.

In 1740, when Frederick II acceded to the throne of Prussia, the regiment became his “Regiment Garde” and the first battalion, his “Leibgarde” under his direct command. From that year, it garrisoned Potsdam and filled its ranks from the regiments of the Prussian Army. Draft could also be raised in the “Royal Canton” of the Silesian mountains.

During the War of the Austrian Succession, the battalion fought at Mollwitz (April 10, 1741) where it suffered very heavy losses (50% of its officers and 75% of its men). Afterwards, only part of the battalion accompanied Frederick as a bodyguard.

During the Seven Years' War, the I. Battalion of the regiment was under the command of:

The numbering system (Stammliste) was first used by Leopold I., Fürst von Anhalt-Dessau (Der alte Dessauer) in the Dessauer Spezifikation from 1737. Around 1780 the numbers were used in the printed Stammlisten, still with some variations for the fusilier regiments. It became official by "Cabinets-Ordre" from October 1, 1806. The present infantry regiment was attributed number 15.

Line of tradition: In 1914 the 1st and 2nd Company of the 1st Garde-Regiment zu Fuß. After WWI in the Reichswehr and later in the Wehrmacht 1st Company Infanterie Regiment 9. Today in the Bundeswehr, the tradition is carried by the “Wachbatallion” (Guard battalion). The motto of the batallion is "Semper Talis". Today the "Wachbataillon" is stationed in the Julius-Leber-Kaserne in Berlin-Wedding and in the Brückberg-Kaserne in Siegburg. It has about 1,800 soldiers in eight companies. 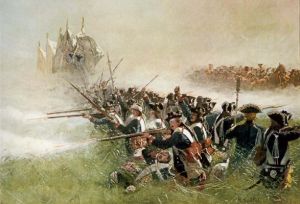 On August 26 1756, when the Prussian Army was ordered to the invasion of Saxony, the battalion was part of the centre column led by Frederick II. More precisely, it belonged to Keith's Corps. The centre column had concentrated at Brietzen and advanced unopposed upstream along the Elbe River by Torgau, Wittenberg, leaving Meissen to its left. On September 6, it encamped at Rothschönberg and finally reached Wilsdruf. Only the I. Battalion accompanied Frederick when the Prussian main army moved forward to engage an Austrian army. On October 1, the battalion was present at the Battle of Lobositz (October 1). The two other battalions remaining in the Pirna Country to maintain the blockade of the Saxon Army which surrendered on October 17. The defeated Saxon army had to pass between two battalions of Prussian Gardes and were then received by two battalions of the Prinz von Preußen Infantry.

On June 18 1757, the I. Battalion of the regiment took part in the Battle of Kolin where it was kept in reserve behind the infantry centre. This battalion covered the retreat of the defeated Prussian army, stopping General Stampach's cavalry on the Planaian highway. During this engagement, it was attacked from two sides and almost entirely destroyed. After this disaster, the battalion was stationed in Breslau and only 60 men along with the wings grenadiers accompanied Frederick II as a bodyguard.

In 1760, the battalion took part in the defence of Breslau from July 30 to August 3. On August 15, at Kuchelberg, it defended the baggage train against Austrian hussars.

N.B.: During the war, contrarily to the grenadiers of other Prussian line infantry units, the grenadiers from the wing grenadier company of this battalion were not combined into converged grenadier battalions. Instead, they were used to protect the headquarters of king Frederick II and as his personal bodyguard.

The uniforms depicted in this section were introduced in 1753.

The guard had no musketeers, regardless of their hats all soldiers were called grenadiers.

N.B.: from 1756, for march and battle, NCOs wore a simpler “undress” coat without any silver braid loop and with a plain red collar

N.B.: from 1756, for march and battle, officers wore a simpler “undress” coat without any silver embroidery loop and with a plain red collar

The uniforms of the drummers were similar to those of the privates but had much more elaborate lacing (drummer lace consisting of a silver drummer braid decorated with a red stripe) and other peculiarities:

Colonel colour (Leibfahne): Field consisting of alternating white and silver vertical stripes. Centre device consisting of a white medallion surrounded by a gold and silver laurel wreath and surmounted by a gold crown. The medallion is decorated with a black eagle holding a sword and lightning bolts surmounted by a white scroll bearing the golden motto "Pro Gloria et Patria". Corner monograms consisted of a gold crowns, gold and silver laurel wreaths and a golden FR ciphers.

Regimental colours (Kompaniefahnen): Field consisting of alternating white and silver vertical stripes. Centre device consisting of a blue medallion speckled in crimson surrounded by a gold and silver laurel wreath and surmounted by a gold crown. The medallion is decorated with a black eagle holding a sword and lightning bolts surmounted by a fuchsia white bearing the golden motto "Pro Gloria et Patria". Corner monograms consisted of a gold crowns, gold and silver laurel wreaths and a golden FR ciphers.