The regiment was created on September 20, 1684 and took the name of the Province of Isle de France. Indeed, expecting a Coalition to soon form against France, Louis XIV raised 30 new regiments from September 1 to 30 for the defence of the various places of the realm. By raising one regiment a day, he avoided any problem of precedence among these new regiments. The regiment was given to Antoine-Louis de Paillardan de Gondrin, Marquis d’Antin.

During the Seven Years' War, the regiment ranked 89th and was under the command of:

From 1756 to 1762, the regiment was stationed on the coasts of Flanders to prevent any British amphibious operation.

By August 1 1757, the regiment was garrisoning Ostende in Flanders. 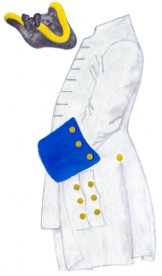 The colonel flag was white with a white cross. Ordonnance flags had a white cross and four isabelle (coffee) cantons, each containing a black vertical triangle pointing towards the edges.