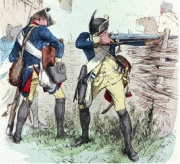 The original regiment was formed in 1685 from French refugees after the Edict of Nantes. However, in 1687, it was incorporated into the newly formed Infanterie Regiment Nr. 15. In 1702, a new regiment was raised to occupy the rank left vacant by the former regiment.

During the War of the Spanish Succession, the regiment was in the Dutch service.

During the Seven Years War, the regiment consisted of two battalions and its successive Chefs were:

In 1768, the regiment was ranked as the third best unit after the Garde (Grenadier Garde, I. Leibgarde Bataillon, II. and III. Garde Bataillon) and Zeuner.

The numbering system (Stammliste) was first used by Leopold I., Fürst von Anhalt-Dessau (Der alte Dessauer) in the Dessauer Spezifikation from 1737. Around 1780 the numbers were used in the printed Stammlisten, still with some variations for the fusilier regiments. It became official by "Cabinets-Ordre" from October 1, 1806. The present infantry regiment was attributed number 13.

The regiment capitulated to the French in 1806 and was never re-established.

The regiment was considered an elite unit. Its owner, Major-General von Itzenplitz, was mortally wounded at Kunersdorf. He ran the regiment tightly and at the same time saw to it that the rights of soldiers were not violated by the officers. Many members of the regiment were killed, wounded and maimed as it was present at eight major battles.

On August 26, 1756, when the Prussian Army proceeded to the invasion of Saxony, the regiment was part of the left column led by the Duke of Braunschweig-Bevern. This column had concentrated in the area of Lübben, then advanced through Lusatia by Hoyerswerda and Bautzen, to Hohenstein (Sept. 8) then to Lohmen north of the Elbe near Pirna. On October 1, the regiment took part in the Battle of Lobositz where it was assigned to the brigade of Major-General Itzenplitz in Kleist's Division. The regiment advanced on the left flank, along with the regiments Alt-Kleist and Alt-Bevern, to engage the Grenzers stationed on Lobosch Hill. The attempt to advance through the skirmish screen proved difficult, however, with ammunition running low, the Prussians adapted to the conditions of the terrain, abandoning close formations and picking and choosing their targets using individual fire. Gradually the Austrians, despite reinforcements that included Joseph Esterházy Infantry, were pushed off the Lobosch Hill and forced back through the burning streets of Lobositz. After an hour of intense fighting, the Austrians were forced out. They retreated in good order. To maintain his contact with the Elbe and to buttress his right flank, the Austrian commander, Browne, shifted his uncommitted left wing around to the plains behind Lobositz and Sullowitz. On October 23, when Keith's Army left Lobositz to return to Pirna, the regiment was part of the left column. On October 28, Keith's Army reached Gross-Sedlitz near Pirna and took its winter-quarters soon afterwards.

On May 6 1757, during the invasion of Bohemia, the regiment took part in the Battle of Prague where it was deployed on the far right of the second line of the infantry centre in Rohr's Brigade. Led by Prince Henri of Prussia, the unit, along with Manteuffel Infantry, waded across the Rocketnitzer Bach and attacked the flank causing the Austrians to give ground. It then supported the breakthrough of the Prussian grenadiers near Kyge-Hlaupetin. This action combined with the similar assaults on the left resulted in the defeat of the Austrians. At the end of August, the regiment was part of the small Prussian army hastily assembled at Dresden by Frederick II to head towards Thuringia and to offer battle to the Franco-Imperial Army invading Saxony. On November 5, at the Battle of Rossbach, the regiment was deployed in the first line of the infantry left wing under Lieutenant-General Prince Henri. On December 5 at the Battle of Leuthen, the regiment was deployed in the vanguard which successfully attacked the Austrian left flank. The regiment brushed aside the Grenzers and smashed a Württemberger regiment. At about 1:00 p.m., the regiment along with Meyerinck Infantry advanced against an Austrian battery of 14 guns planted on the heights behind Sagschütz and took it after a short opposition. This threw the whole corps of Nádasdy into confusion.

In April 1758, the regiment took part in the Siege of Schweidnitz. It then participated in the failed invasion of Moravia. On October 14, it fought in the Battle of Hochkirch where it was initially deployed in the centre of the first line. Around 7:00 a.m., the regiment, supported by Kannacher Infantry attacked the village Hochkirch and, after taking heavy canister casualties, managed to momentarily retake the village edge. However, it was soon forced to retire by the Austrian cavalry. The regiment suffered heavily during this battle, loosing 820 men (about 75% of its effective strength).

In 1759, the regiment took part in engagements at Pretsch and Hoyerswerda.

In 1762, the regiment's inhaber became Peter III of Russia in a political gesture by Frederick in recognition of the miracle of the House of Brandenburg - effectively the death of Elizabeth Petrovna and the Russian realignment, under Peter III, with Prussia. On July 21, the regiment was present at the Battle of Burkersdorf where it formed part of Ramin's Brigade in Manteuffel's right wing which did not take part in the main attack. From August, the regiment took part in the siege and recapture of Schweidnitz.

The uniform depicted in this section was introduced in 1741/42. 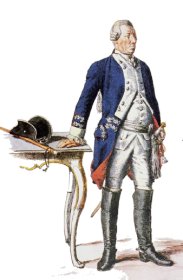 The uniforms of the drummers were similar to those of the privates but had much more elaborate lacing (drummer lace consisting of a red braid decorated with two superimposed rows of hollow white rhombuses) and other peculiarities:

The drum had a brass barrel and white rims decorated with alternating large blue dots and groups of 5 small red dots disposed in a 2-1-2 pattern.

The pikes used as staffs for the colours were light brown.