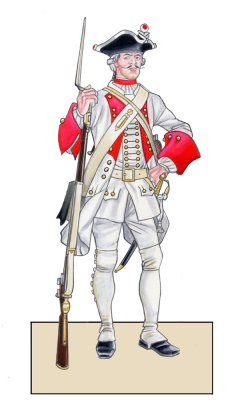 The regiment was raised in 1715 in the electorate of Trier as regiment “Carl Herzog zu Lothringen und Bar, Kurfürst von Trier”. In 1716, it was transferred to Imperial service as “Alt-Lothringen”. In 1726 Franz Stephan Herzog zu Lothringen, husband of Maria Theresa, became Inhaber (owner) of the regiment. In 1745, he was crowned as Franz I Holy Roman Emperor of German Nation. Since then, the successive emperors of the house of Habsburg Lothringen were regimental Inhaber. The recruiting area of the regiment area was the entire Reich (empire).

As per the Etat général des Troupes qui servent sa Majesté Impériale et Royale Apostolique sur pié en 1760, the regiment counted 4 battalions (2 grenadier coys and 16 fusilier coys) for a total of 2,300 men. This was the administrative organisation of the regiment. However, the tactical organisation differed: 2 field fusilier battalions, each of 6 companies; 2 grenadier companies (usually converged with grenadiers from other battalions into an ad hoc unit); and 1 garrison battalion of 4 companies (see Austrian Line Infantry Organisation for more details).

Colonel-commanders during the Seven Years' War:

In 1763, after the war , the regiment garrisoned Olmütz in Moravia and Öfen (actual Budapest) in Hungaria.

At the beginning of 1756, the regiment was garrisoning Pilsen in Bohemia. On October 1, it took part in the battle of Lobositz where it was deployed in the first line of the centre under General C. Kolowrat in the brigade of Major-general Wied.

From May to July 1758, a battalion took part in the defence of Olmütz. By August 2, one battalion of the regiment served in the first line of the main Austrian army under the command of Count Leopold Daun near Jarmeriz. Daun was following up the Prussian army retiring through Bohemia after the failure of the Prussian invasion of Moravia. On October 10, two battalions of the regiment took part in the battle of Hochkirch where they were deployed in the right column (under Count d'Arberg) of Arenberg's corps on the Austrian right wing to the east of Rodewitz.

By mid August 1759, the regiment was part of Buccow's corps posted in Lusatia. On September 2, it took part in the combat of Sorau.

In 1760, the regiment distinguished itself by repeated sorties in the defence of Dresden. On November 3, it was nearly annihilated at the battle of Torgau.

Uniform in 1757 - Source: Richard Couture from a template by Jocelyne Chevanelle

As per a regulation of 1755, musicians were now distinguished from soldiers only by ???blue??? swallow nests on the shoulders.

Duffy, Christopher; "By Force of Arms." Volume II of The Austrian Army in the Seven Years War. Emperor's Press, Chicago 2008