The regiment was raised in 1672 in Berlin by General Christopher Albrecht Count zu Dohna. It originally consisted of eight companies. Besides new recruits, soldiers were originally drafted from the garrison of the Fortress of Cüstrin. In 1688, the regiment received two additional companies.

During the War of the Spanish Succession, the regiment formed part of the Prussian contingent.

In 1715, the regiment served in Pomerania.

The numbering system (Stammliste) was first used by Leopold I., Fürst von Anhalt-Dessau (Der alte Dessauer) in the Dessauer Spezifikation from 1737. Around 1780 the numbers were used in the printed Stammlisten, still with some variations for the fusilier regiments. It became official by "Cabinets-Ordre" from October 1, 1806. The present infantry regiment was attributed number 4.

In 1757, the regiment was part of Lehwaldt's Army assigned to the defence of East Prussia against a Russian invasion. On August 30, at the Battle of Gross-Jägersdorf, the regiment was deployed in the first line of the infantry right wing in Lieutenant-General Kanitz's Brigade. The regiment suffered heavy casualties during this battle, loosing 78 men. At the end of the year, it was at the Siege of Demmin (December 29 - January 1).

At the beginning of 1758, the regiment took part in the Siege of Stralsund (January 10 till June 18) before being transferred to the eastern front. On August 25, the first battalion of the regiment fought at the Battle of Zorndorf where it formed part of the first line of the left division led by Kanitz. It was virtually annihilated during this battle (28 dead, 206 wounded and 176 captured or missing). On September 25, the second battalion of the regiment was part of the detachment of Major-General Wobersnow who was sent by Dohna from Blumenberg to cut off the Russian detachment left at Landsberg by the retreating main army. On September 26, this Prussian detachment captured Landsberg and the battalion was then stationed in this town. On October 3, it took part in an engagement near Passkrug.

From 1759, the regiment, now deprived of its recruiting cantons which had been occupied by the Russian Army, was used very sparingly in combat.

On July 21 1762, the regiment took part in in the Battle of Burkersdorf. From August to October, it was also present at the Siege of Schweidnitz.

N.B.: this regiment was one of the sole Prussian infantry regiments to change its uniforms after 1753. This change occurred in 1776. 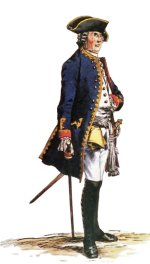 Officers had tricorne laced with a thin golden lace. They always wore tricornes notwithstanding if they were commanding fusiliers or grenadiers. They had a white neck stok. They also wore a black and silver sash around the waist and had a black and silver sword knot. They carried an officer stick. Their coats were similar to those of the privates but had no turnbacks and had gilt buttons and a golden embroidered lace edging on the coat, skirts and pockets as well as on the cuffs and sleeve flaps. 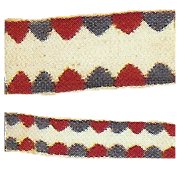 White lace bordered with a red and blue pattern. Swallow nest with five vertical bars and one horizontal bars on the shoulders. 11 horizontal laces with red tassels on each sleeve. Lace along the edge of the coat, the buttonholes, the pockets, the cuffs and on the back of the coat.

The pikes used as staffs for the colours were dark brown.