The regiment was created on September 14 1673 by the Chevalier d'Hocquincourt. His death at the combat of Gamhurst on July 23 1675, allowed the king to acquire the regiment which was given to Queen Marie-Thérèse d'Autriche a few days later, on July 31. The regiment was then completed with companies taken from Colonel Général Dragons and Royal Dragons.

During the War of the Austrian Succession, the regiment initially served in Westphalia in 1741. In 1742, it took part in the failed invasion of Bohemia and was back in France in 1743. From 1744 to 1746, it served in Italy. In 1747, it was transferred to the coasts of Normandie.

In 1756, the regiment counted 4 squadrons and ranked 5th.

During the Seven Years' War, the regiment was under the nominal command of Queen Marie Leszczyńska.

In 1756, at the outbreak of the Seven Years' War, the regiment was stationed at Vaussieux.

By August 1 1757, the regiment was garrisoning Dunkerque in Flanders. Throughout the war, it was used to guard the coasts of Guyenne and Flanders.

Drummers wore the queen's livery: red coat heavily laced with the braid of this livery. 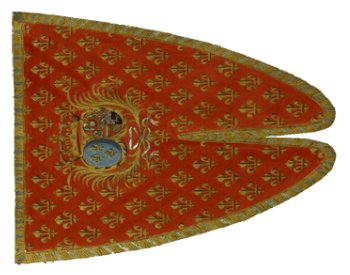 This article is mostly a translation Jean-Louis Vial's article “La Reine Dragons” published on his website Nec Pluribus Impar. The article also incorporates texts from the following books which are now in the public domain: