In 1661, the seven companies posted at Bar evacuated this town which had been retro-ceded to the Duke of Lorraine. They then went to Nancy where they participated in the demolition of the fortifications. In 1663, the regiment took part in the occupation of Marsal. In 1664, part of the regiment joined the French contingent sent to the assistance of the Holy Roman Empire against the Turks. It then fought in the Battle of Saint-Gotthard where it played a decisive role. In 1665, the rest of the regiment was sent against the Bishop of Münster. In 1666, this detachment took part in the combat of Ouden-Bosch.

In 1685, the regiment received the title of “La Sarre”. In 1686, it was at the camp of Maintenon and worked at the canal destined to bring water from the Eure River to Versailles. The regiment suffered heavy losses from illness and exhaustion during these works.

At the outbreak of the Nine Years' War (1688–97), the regiment was so seriously understrength that it could not participate in the two first campaigns. In 1690, a battalion of the regiment joined the Army of Germany while the other served in Piedmont where it fought in the Battle of Staffarda. In 1691, the entire regiment served in the Alps where it took part in the capture of Veillane, Carmagnola, Coni and Montmélian. In 1692, the first battalion joined the Army of Flanders where it took part in the siege of Namur, in the Battle of Steenkerque and in the bombardment of Charleroi. In 1693, the first battalion took part in the siege of Huy, in the Battle of Landen and in the capture of Charleroi. In 1694 and 1695, the first battalion continued to serve in Flanders. In 1695, it was at the bombardment of Bruxelles. In 1696, it was transferred to the Army of the Rhine. Meanwhile, the second battalion had remained in Piedmont where it served until 1696.

In 1697, the second battalion of the regiment was disbanded.

In 1733, at the beginning of the War of the Polish Succession (1733-35), the regiment was sent to Italy where it took part in the sieges of Gera d'Adda and Pizzighetone and in the capture of the castles of Trezzo, Lecco and Fuente. In 1734, it participated in the siege of Novarra, Arrona and Tortona, in the affairs of Colorno and in the battles of San Pietro and Guastalla; and in 1735, in the capture of Gonzague, Reggiolo and Revere, and in the combat of Goito.

In 1741, during the War of the Austrian Succession (1740-48), the regiment was recalled to France and immediately redirected to the Rhine. In 1743, it was stationed on the Neckar, and fought in the combat of Rheinweiler. In 1744, it took part in the recapture of Wissembourg; and in 1745, in the combat of Pfaffenhoffen. In 1745, the second battalion of the regiment was re-established. In 1746, the regiment took part in the defence of in Genoa. In 1747, it remained at the camp of La Ciotat. In 1748, it was at the camp of Tournoux.

During the Seven Years' War, the regiment ranked 34th and was commanded by:

The 1st battalion remained in Europe for the whole war.

By August 1 1757, the battalion was stationed at Royan in the Aunis country.

In 1760, the battalion garrisoned La Rochelle.

On April 3 1756, the 2nd battalion, under the command of Lieutenant-Colonel, M. de Sennezergues, embarked on board the fleet transporting reinforcements to Canada along with the new French commander, the Marquis de Montcalm. On May 12, it disembarked at Québec. On June 6 and 7, the 2nd battalion went to Fort Frontenac on Lake Ontario to join II./Béarn Infanterie and II./Guyenne Infanterie already stationed there. This fort was supposed to serve as the starting point for the expedition against Fort Oswego (Chouaguen). In July, Montcalm advanced towards Lake Ontario and reached Fort Frontenac on July 29 to lead the attack on Fort Oswego. The 2nd battalion joined this expedition which consisted of 2,000 regulars, 1,000 militiamen and around 200 Indians along with 51 guns, mortars and howitzers. It sailed on Lake Ontario up to Niaouré. On August 12, Montcalm opened the trench in front of Fort Ontario. On August 13, the British abandoned the fort after having spiked their guns and wetted their powder. The capture of Fort Ontario allowed the French to install a battery of 9 guns on the heights of the right bank of the Oswego River. This battery, taking the British from the rear, forced them to surrender. Montcalm captured 5 flags, 55 guns, 14 mortars, 5 howitzers, a brigantine (14 guns), a schooner (8 guns), a few light boats and a large quantity of supplies and munitions. In this expedition, Captains Palmarol and Duparquet were wounded. The battalion took up its winter-quarters on the Island of Montréal.

By July 20 1757, a French force totalling 8,000 men (including the 2nd Battalion) was gathered at Carillon (present-day Ticonderoga). On August 1, this force left Carillon with Montcalm and advanced upon Fort William Henry. The battalion then took part in the siege of Fort William Henry which lasted from August 5 to 9. After the capture and destruction of the fort, the French force re-embarked on August 16 and returned to Carillon. On September 4, the battalion left Carillon and arrived at Saint-Jean on September 7. It then worked at the fortification of the place. On October 12, a piquet of the battalion was sent to Carillon to form part of the garrison of the place during winter. On October 28, the rest of the battalion left Saint-Jean for its winter-quarters on Ile-Jésus.

In mid June 1758, the battalion left its quarters and moved towards Carillon. On June 30, the battalion was part of Montcalm's detachment who encamped at the saw-mill near the Fall on the west bank of the channel connecting Lake Saint-Sacrement (present-day Lake George) to Lake Champlain. On July 6, it followed the main French force to the left bank of the fall before retreating to Carillon. On July 7, it worked at the entrenchment in front of the fort. On July 8, the battalion took part in the victorious Battle of Carillon where it was deployed on the left wing under Bourlamaque. In this battle, the regiment lost Captains Maurau, Dumesnil and Campredon, killed; Captain Beauclair and 1 lieutenant wounded. Between November 1 and 5, the entire French army retired from Carillon to move to its winter-quarters, leaving detachments from various battalions to guard the fort. The battalion took up its winter-quarters on Île Jésus, at Terrebonne and Repentigny.

On May 29 and 30 1759, the Chevalier de Lévis arrived at Québec with all 5 battalions of regulars (La Sarre Infanterie, Royal Roussillon Infanterie, Languedoc Infanterie, Guyenne Infanterie and Béarn Infanterie) along with the militia of the government of Montréal. While awaiting the arrival of the British fleet, the French army encamped on the right bank of the Saint-Charles river and fortified it to serve as a second line of defence if ever the British were able to land at Beauport. On June 26, the French army moved to its encampment at Beauport. The 5 battalions of regulars, forming a single brigade, held the centre. On July 31, the grenadiers of the battalion took part in the victorious Battle of Beauport where they were deployed between the militia of Montréal and the battalion of Montréal who had been sent forward to man the entrenchments between the 2 threatened redoubts on the strand. On September 13, the battalion took part in the disastrous Battle of the Plains of Abraham near Québec where it was deployed on the right wing and suffered heavy casualties, losing its lieutenant-colonel, M. de Sennezergues. After the battle, the regiment followed the French army in its retreat towards Jacques-Cartier. On November 7, the battalion took up its winter-quarters on Île-Jésus.

By March 1760, 51 men of the battalion had been detached to Saint-Jean while 34 were unfit for duties. This left 345 men available for the expedition against Québec. The latter were supplemented by 261 men from the militias of Île-Jésus and Terrebonne who were integrated into the battalion. From April 21 to 25, transport vessels gradually sailed from Montréal for Québec. Overall the battalions then counted 24 officers, 339 regulars, 230 militia and 22 non-combatants for a total of 615 men. On April 28, it took part in the Battle of Sainte-Foy where it was deployed on the left wing of the first line. On the morning of May 18, the battalion was sent to Saint-Augustin to recover provisions from a schooner beached there. On May 20, the battalion was sent to Sainte-Anne to guard the provisions. On May 24, it left Sainte-Anne. It retired towards Montréal with the rest of the French army when a British fleet under Lord Colville entered the harbour. On August 1, it was sent to Sorel to delay Murray's flotilla. On September 9, after the capitulation of Montréal, the battalion still counted 243 men and 19 officers. On September 15, as per the terms of the capitulation, the battalion was embarked aboard British transports which reached Québec on October 10 and 11 and then sailed for France where they arrived on December 3. On its arrival, it temporarily joined its first battalion who was garrisoning La Rochelle. On December 6, the second battalion (now only some 130 men) set off from La Rochelle and marched towards Poitiers where it arrived on December 11.

After the return of the 2nd battalion to France, the seriously depleted regiment was reorganised. The regulation of February 1, 1761 specified that the regiment now consisted of only 12 companies of 20 fusiliers and one company of 40 grenadiers. In February, the soldiers of the former second battalion were transferred from Poitiers to Le Puy en Velay. These same soldiers were later sent to Tournon and other districts of Vivarais and finally to Béziers.

In 1762, the rest of regiment was part of the French corps under the Maréchal de Beauvau sent to the assistance of the Spanish Army during the attempted conquest of Portugal. The regiment was at the siege of Almeida. It then took up its winter-quarters in Andalusia.

In January 1763, the regiment marched back from Portugal to France. On March 22, it was finally reunited with the remnants of the battalion which had served in America.

Contrarily to the French battalions sent to Canada in 1755, those who formed part of the reinforcements sent in 1756 wore the standard uniform of the regiment. Therefore, the Continental and Canadian uniforms were identical. 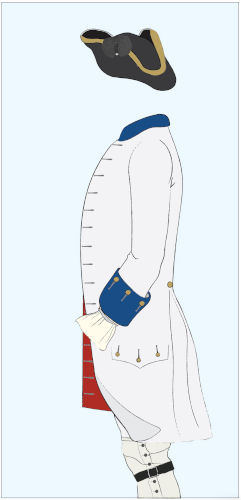