The regiment was raised on October 4 1676 at the expense of the States of Languedoc for the protection of the coasts of the region.

During the War of the Austrian Succession, the regiment initially served in Bavaria in 1742. In 1743, it was attached to the army defending Alsace and Lorraine. From 1744 to 1746, it served on the Var in Provence. In 1747, it was transferred to Strasbourg. In 1748, it was at Huningue in Alsace.

During the Seven Years' War, the regiment was under the command of :

In 1787, the regiment was transformed into the “Chasseurs du Languedoc”, taking the 6th rank of this arm.

In 1756, at the outbreak of the Seven Years' War, the regiment was stationed at Agen.

In 1759, the regiment was stationed at Rennes for the protection of the Coasts of Britanny.

In 1760, the regiment was sent to Germany where it served for the two last campaigns of the war.

The Etrennes Militaires of 1758 mention a blue saddle cloth bordered with a white braid.

Throughout the war the French dragoon uniform seems to have evolved significantly. Our only primary sources for the uniform at the start of the conflict are the Etat Général des Troupes Françoises of 1753 and the Etrennes Militaires of 1758. The first primary pictorial evidence comes from Raspe in 1761. Here we present various interpretations of the evolution of the uniform.

Raspe's publication illustrating the uniform towards the end of 1761 shows a uniform very similar to the one depicted by the various états militaires, the only noticeable differences being:

In December 1762, a regulation introduced a brand new green uniform with white as the distinctive colour.

Exceptionally the drummers of this unit, even though it was not a royal regiment, wore a blue coat heavily laced with braids at the king's livery alternating with silver braids. 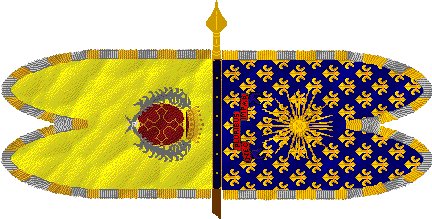 This article is mostly a translation Jean-Louis Vial's article “Languedoc Dragons” published on his website Nec Pluribus Impar. The article also incorporates texts from the following books which are now in the public domain: